‘People have TB’: why Yarl’s Wood is still a critical issue for WoC

We seem to have entered an era of not calling anything what it truly is: white nationalism is the alt-right, a murderous white terrorist is a political activist. Let us be absolutely clear that UK detention facilities are unlawful hell holes for the individuals that come to be imprisoned there. A growing body of evidence is now available that documents the cruelty directed at the men and women forced to live behind these high walls.

On Saturday, the 10th demonstration organised by Movement for Justice took place outside Yarl’s Wood Detention Centre, Bedfordshire as part of a longstanding campaign against the unlawful detention of its inmates, that majority of whom are young women. Following Channel Four’s undercover documentary last year, an increasing number of people have become aware of the questionable conduct of Serco, the private company that runs Yarl’s Wood, and have galvanised behind a movement to see detention facilities shut down.

Coaches were arranged from London to Liverpool and elsewhere, transporting at least 2000 supporters. Some charities hired private coaches to bring their members to the demonstration. I chose to drive myself and four others to the isolated facility in the Bedfordshire countryside. As we approached the prison, all other signs of daily life slowly disappeared. There were few houses, no shops, and silence. After driving for another two miles, the wire fence comes into view, followed by the tall grey, red concrete walls and a military-esque watch tower. You really couldn’t make it appear more bleak. If something is shameful then you tend to bury it away, hoping that nobody will find it or gain access to it. A huge organisational effort is required to gather such vast numbers of protesters at this site. The difficult journey is clearly no accident. 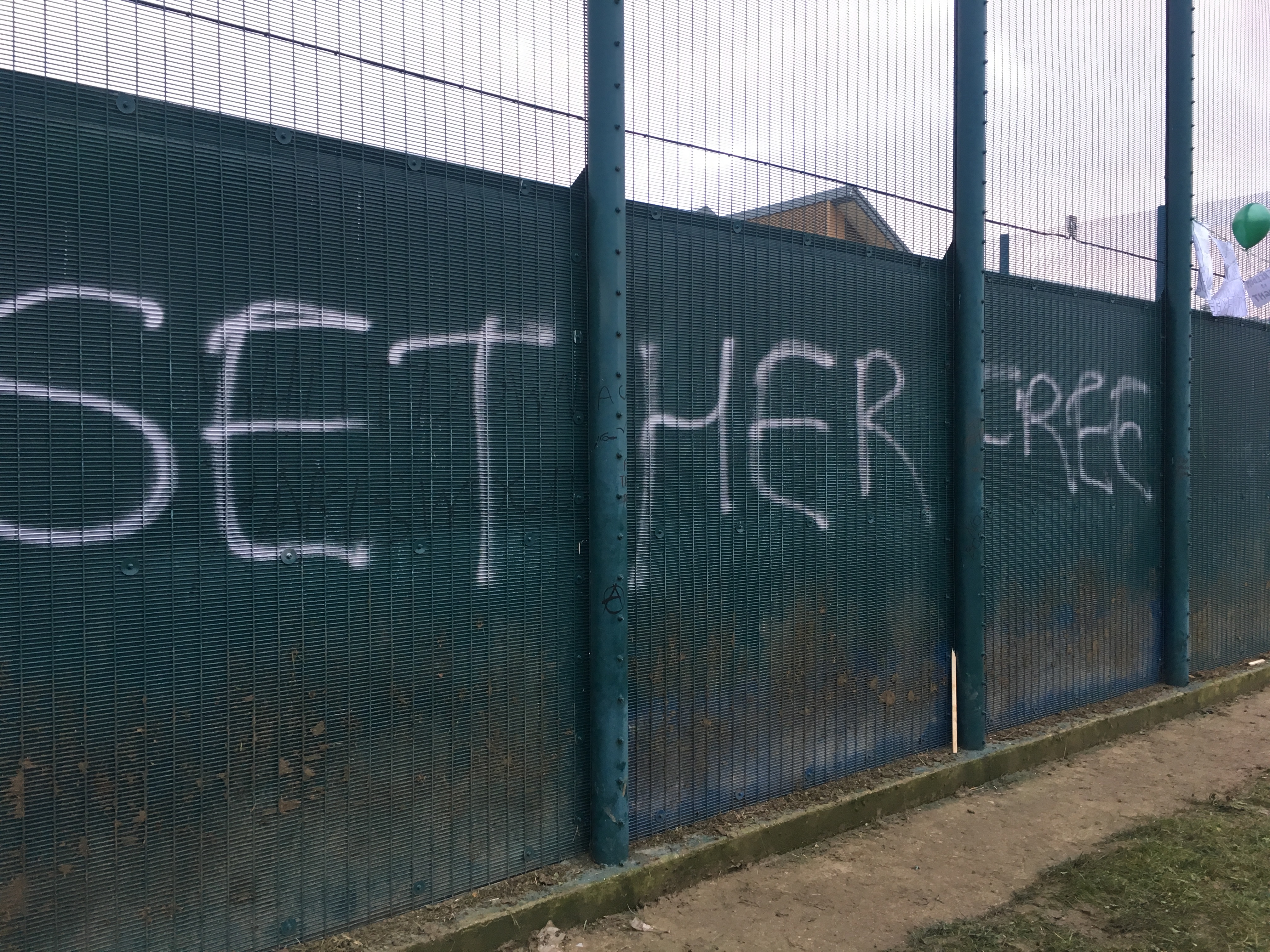 After spending half an hour marching , chanting and drumming so that the women inside could feel our presence, we arrived at the south facing windows of the accommodation block. The women knew that we were coming and many were in their rooms. The windows are secured and only open enough for the detainees to stick an arm out. Some waved their arms to the beat of the drums. Others had prepared signs that they have stuck to the windows, one of which read, “We love you all so much!”, another “People have TB”. Throughout the day it became clear that the women have built up an amazing sisterhood through their shared trauma.

A PA system projected the voices of women inside the detention facility, who were able to call out on mobile phones. One of the women shouted that the guards were trying to stop them getting to the windows, and several had been stopped trying to make their way to the accommodation block. After a short time, Mabel, who has been in Yarl’s Wood for over two years, away from her seven-year old daughter, made her way to the phone. Her words were difficult to hear. It is a strange thing when two thousand protesters all fall silent to listen to one person speak: “We are not criminals. We are fleeing torture and persecution. I thought Britain, a country of democracy, would understand this.”

It is incomprehensible that we are imprisoning women that have not committed any crime. Many of these women are seeking asylum and are fleeing persecution in their home countries. Sophia, who spent a month in Yarl’s Wood,  described the abuse she faced in Nigeria prior to fleeing to the UK: “I was a victim of sexual abuse by my stepdad and abused from the age of 12. Then there was domestic violence from my partner. I had my son at the age of 14. I had a very close friend who was like my sister. She was murdered. She went out and never returned.”

Sophia had lived with her close friend since fleeing her parents’ home. When they found her friend’s body, it was severely mutilated – the eyes, breast and genitals were missing. She continues to suffer from depression and anxiety. She never imagined that Yarl’s Wood would make her mental health problems worse: “The trauma keeps coming back, up until this moment I still can’t sleep. I am still on anti-depressants and sleeping tablets to keep going. The experience there was really bad. They don’t listen to you. They don’t even think about human rights. They treat you like criminals.”

This isn’t the first time that concerns about the health care in detention facilities has been raised. The provision of healthcare services in Yarl’s Wood has been outsourced to another private company, G4S. There have been several reports that women’s health concerns are not being investigated seriously. Last year Channel Four went undercover at the facility, revealing that many of the women’s health concerns were being treated with scepticism due to their immigration status. One women who underwent a miscarriage was told by the hospital to call an ambulance if she felt unwell the following day. The next day she was left waiting for an ambulance for three hours. When Channel Four asked G4S for further comment they stated that she had received an “excellent standard of clinical care from both G4S medical staff and the pregnancy unit at the local NHS hospital”.

One of the signs in the window raised concern amongst the protesters. Written simply on A4 paper in light blue ink it said, “People have TB”. When tuberculosis (TB) is left untreated, the infection can disseminate around the body and cause a number of devastating consequences particularly in those with suppressed immune systems. TB is much more of threat in those that live in close proximity for long periods of time, and doctors often have to treat close friends and family to prevent the spread of the infection. The presence of TB among the detainees of Yarl’s Wood should concern us all. Serco denied that there has been any TB outbreak, stating that only one individual with TB had been identified and that no one is currently in isolation (although previous reporting from the Bedfordshire on Sunday found that one woman and her four closest friends had be taken to hospital after a suspected outbreak in late November).

Resistance towards detention facilities is on the rise. The inhumanity of their existence is being called into question. Several protesters travelled a considerable distance to ensure that their voices were heard. Damaris and Martha are sisters that travelled on the coach from Leeds: “Detention is just a nice way to say imprisonment. These women do not have any personal freedom and they have not done anything wrong. They haven’t done anything that requires that they are removed from society. Having any situation where people cannot integrate is wrong. They shouldn’t exist.”

For individuals such as Mabel who have been detained for years, it is increasingly hard to identify any difference between these facilities and prison. They certainly look and feel very much like prisons. We cannot ignore the fact that many of these detainees are from previously colonised countries. Some of them already have family here, have some knowledge of English, and feel that Britain will be the best place to make a new life. Sophia’s story struck a very personal chord. I remember my mum telling me that my cousin, who had spent the majority of her adolescence in the UK, was being deported. I did not really understand how truly terrifying an experience this must have been for her at the time.

The fact that you or I are not in Yarl’s Wood is merely due to good fortune. The afternoon I spent outside its walls was more than enough to convince me that Yarl’s Wood needs to be shut down. We continue to try to perpetuate this myth that a human body can be illegal and fences should keep them at bay. The ability of human beings to mistreat each other never fails to disgust me. Yet the human capacity for resilience in the face of adversity also humbles me. When I saw the vast number of people who attended the Yarl’s Wood demonstration, and how interest continues to grow, I know that it is possible to overcome these injustices.

*Some names have been changed to protect identities.

For further information on the campaign to close Yarls Wood and other UK Detention Centres please visit www.movementforjustice.org.