Save Passing Clouds: the best community jam in Dalston 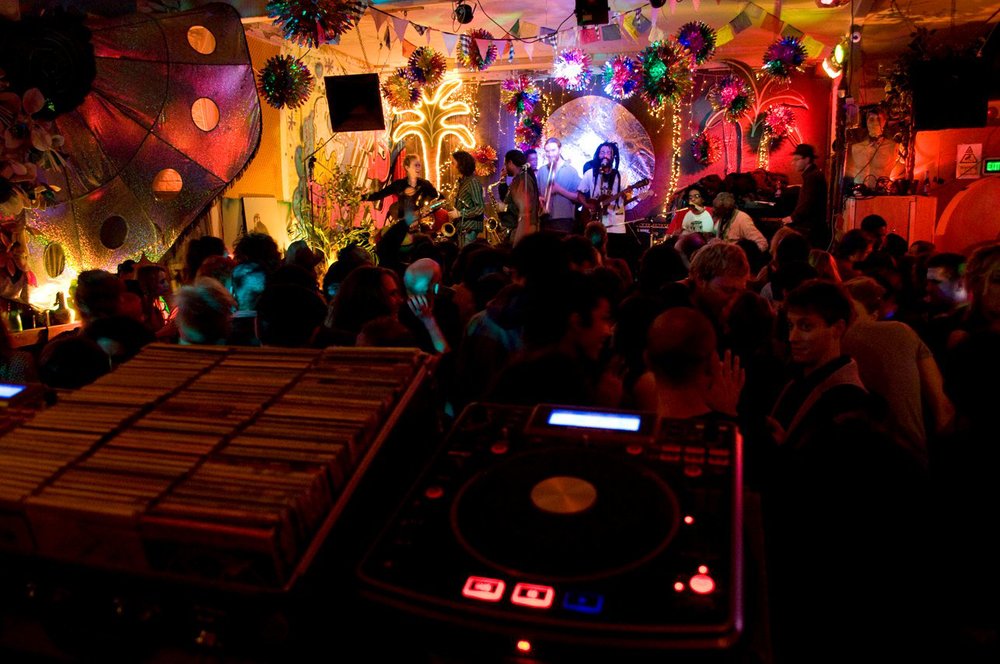 I grew up in Hackney when it was scary place. When drive-bys were a regular occurrence on my road, and the only place to get dinner out was the café in Tesco. So when I came back after three years at university and found that Dalston was somewhere were people wanted to be at night, it took some getting used to. Priced out of living there now, I’m still “getting used to it”.

There is no denying that the music venue, Passing Clouds, along with many other venues, played a part in the gentrification of Hackney. It was a jewel of cosmopolitanism appearing in a place that during the early 2000s had held a distinct air of disconnect. I wore a “keep Hackney Crap” badge for a bit – I’m the last person you’d expect to sing its praises now it’s under threat, and yet I feel that this was the one place in gentrified Hackney that fully welcomed me as a community member. Thousands of supporters marched this weekend to save it, and I attended with my family.

To many, Passing Clouds is an internationally renowned music venue, but they also run workshops, film nights and The People’s Kitchen – an event where volunteers collect food waste from local businesses and cook it into a vegetarian feast… so far, so hegemonic hipster, but what defined the Passing Clouds ethos was that participation in much of these events has always been on a donation basis. If you had no money, you could still come, and that meant that they fostered relationships within a community that historically has been known to be very deprived.

I directed my first production at Passing Clouds. In 2010, two of us, 22-year-olds of mixed heritage without a credit to our names, approached the venue and said “We want to produce and direct this show at your venue.” and they said “Sure”. A couple of years before this time, that opportunity wouldn’t have been remarkable, but this was a time when arts organisations were having their funding cut, and first on the lists of most organisations was “creative learning”, because to a board facing budget cuts, creative learning looks like a hole where money is poured into, and none comes out. In actuality, it’s a long-term investment which pays off in the form of high quality artists, who’ve spent ages experimenting until something good comes out.

In this current climate, we’re seeing a dearth of ethnic and class diversity at certain level in arts and entertainment, and this to a large part is due to investment at the creative learning stage having been stymied. But that’s beside the point, as Passing Clouds didn’t have a creative learning department- as far as I’m aware it’s never had any departments… I’m pretty sure it’s never had an “investment strategy” either, because (and believe me, I’ve wracked my brains writing this) the best word I can use to describe the organisation is a Jam. How else can you describe a space where artists of international reputation, from across the globe would play downstairs in the main space, and retire upstairs, to a space open to everyone, and try making something new with some people they’ve  never met?

We collaborated with a food design company to make a devised multi-sensory theatre piece. The production had its moments of charm, but it wasn’t a vital contribution to theatre. Pretty chaotic and good fun for the (quite drunk) audience, it was as you might expect from a young team overcoming first time hurdles. But to be given the chance to do that? It was vital experience for our future careers in the arts.

Passing Clouds did diversity before it was a “thing”. They don’t have any ethnic and disability monitoring forms to prove it, because that’s never been their vibe. Funded arts organisations spend millions trying to achieve this level of community participation and collaboration, but few manage; It’s truly the most inclusive arts space I’ve ever entered.

Dalston is a strange place, The Four Aces – the legendary club which brought Desmond Dekker and Jimmy Cliff to London and is considered to be heavily responsible for Ska, Dub and Jungle, ran for 42 years until the council force purchased it, saying they were going to give us a cinema (FYI, we got flats – no cinema, all flats…). This was the mark of when things got culturally stagnant in Dalston last time, and as the guillotine hovers above so much of London’s nightlife, surely even the most hard-nosed property developer should find that difficult to ignore.