What Shia Labeouf tells us about white (liberal) male privilege 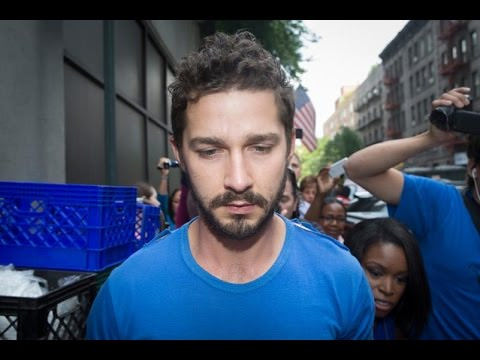 Shia Labeouf was so much more fun when he was wearing paper bags on his head or shouting at us in the name of motivation.

Nowadays he’s taken to hurling racist abuse at police officers, which made headlines after body cam footage of the actor’s recent arrest came to light. The charge? Drunk and disorderly behaviour, obvs.

Spittle flying and rage contorting his already dishevelled grill, high(low)lights from the incident include Labeouf telling a black cop that he was “going to hell” as well as claiming that he was being arrested by a black man because he was white.

Upon realising the reverse racism card didn’t double-up as a ‘get out of jail free’ card, Labeouf drew for the“I got more millionaire lawyers than you know what to do with, you stupid b****!” card.

Somehow, he even managed to work in the big-black-penises-impaling-your-wife’s-pink-cavern insult, when he told a white cop that he must feel ashamed his wife prefers “black d***.”

But the most impressively delusional aspect of Labeouf’s tirade is the fact that he genuinely appeared to see himself as an ally for the black cause, whilst simultaneously hurling racially-charged abuse.

Subtext: “How dare you – a lesser male on the hierarchy of masculinities to I, who is white and rich – make me feel disempowered? How dare you — oppressed black man — be an agent of the system which binds you and not be grateful to me, the enlightened, liberal white man who has a couple of black friends and would totally wave a banner at a Black Lives Matter march.”

This coming from someone who earlier this year opened a participatory exhibit and rebuke to Donald Trump called “He Will Not Divide Us”. From a guy who revels in lefty politics and resistance-themed art, and has nailed almost every hipster cliché in the book.

When he’s not making subversive art or mediocre films, you’ll find him exercising his rich white guy privileges. Namely, getting arrested for multiple misdemeanours without doing extensive jail time or getting shot on sight. Recalling one incident in which he tried to stab a neighbour and spent two days in jail, he said that he “at least understood that being in jail is not the move.” Following a later arrest and fleeting visit to the clink, he recalls the “terrific egg sandwich” he had that inspired his Egg Ramen Salad Sandwich recipe.

During an argument with his wife in 2015, he was filmed saying “I don’t want to hit a woman, but I’m getting pushed” and that he “would have killed her.” Whatever the incident, it is usually portrayed as the latest bat-shit-crazy but forgivable blunder from a troubled former child actor. He issues a Twitter apology or appears on a talk show, and then gets back to his latest bit of artwork critiquing the brokenness of American society.

Now, back to the latest ‘misdemeanour’. While the substances coursing through Shia Labeouf’s veins that night almost certainly loosened his tongue, some might say “the drunk mind speaks the sober heart.” Labeouf’s example shows us what can happen when the ‘faux-woke’ white male has his position of privilege challenged – worst still, by the ‘victims’ he claims to feel an affinity with. Eager to point his finger at the more obvious enemies of liberalism, this episode serves as a reminder of the pitfalls of not keeping your own privilege in check.

Since the embarrassing footage from his latest escapade went public, Labeouf has issued an apology on Twitter. While he rightfully acknowledges his inexcusable behaviour and ‘outright disrespect for authority’, does anyone else notice anything missing here? Here’s a clue – it’s a word beginning with R. The dirtiest of words for a man who prides himself on his “I’m everything Trump isn’t” credentials.

That’s the worst thing about faux-woke individuals – they’re so intoxicated with their own self-righteousness that they can’t smell their own bullshit. They use out n’ proud bigots as a yard stick against which to compare their own liberalism. They take comfort in knowing they’ll never be as bad as ‘those guys’ without challenging their own insidious patterns of thinking or privileges. Worst still, they crave affirmation. They want a gold star, smiley face and a ‘well done!’ written in the margins of their good intentions. But dare to pull a faux-woke person up on problematic behaviours or unchecked privilege, and the bullshit hits the fan. In the blink of an eye, they transform from moral crusader to misunderstood victim. Their defence game is stronger than the Great Wall of China. What is often absent from their reaction, however, is honest self-reflection or a willingness to listen.

A Fabergé egg ain’t got nothin’ on the fragility of the faux-woke. But the façade always cracks at some point. What no one can argue with is the fact that Labeouf has got more issues than Vogue. As his apology states: “I have been struggling with addiction publicly for far too long, and I am actively taking steps toward securing my sobriety and hope I can be forgiven for my mistakes.”

Unfortunately, substance addiction does not absolve one from being racist, but heck — I wish him all the best of luck as he attempts to eject himself from the crazy train to oblivion. And don’t sweat it Shia — if there’s one thing your rich white male privilege entitles you to, it’s forgiveness.