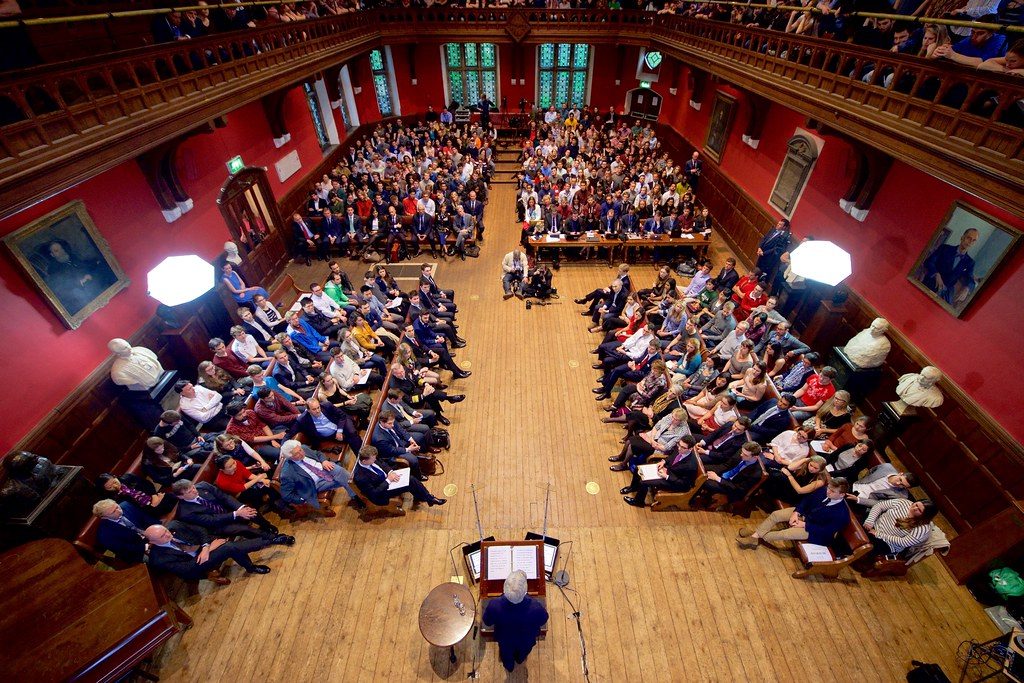 Image via ITV / This Morning

A boycott of the Oxford Union has been launched in opposition to far-right figureheads being invited to speak at the student society. In an open letter first posted to Twitter on Sunday, students, academics and Oxford residents expressed “firm and uncompromising opposition to all forms of fascism and racism”, calling on others to boycott all events hosted by the union. The petition has received 348 signatures so far.

The protest comes in light of the union’s invitation to fascist media personality Katie Hopkins, to speak at a debate about “no platforming” on Thursday. The open letter reads: “This is a woman whose hateful views, including comments directed at refugees, migrants, Jews, Muslims, the mentally ill and the LGBTQ+ community have led to her being fired from LBC Radio.”

Katie isn’t the first far-right speaker to be invited to speak – previous guests include David Irving, Nick Griffin and Tommy Robinson. The open letter continues: “These events form part of a decades long pattern of inviting proponents of hate into Oxford… The union has ignored repeated and widespread calls from Oxford students, staff and residents to withdraw invitations to such figures.”

The letter goes on to demand that the society immediately “cease hosting fascists and racists” and that videos of visits by Tommy Robinson, Steve Bannon, Marine Le Pen and Mahathir Bin Mohamad are pulled from the society’s YouTube channel.

The Oxford Union Society, not be confused with Oxford SU (the students’ union), was founded in 1823 and is one of the Britain’s oldest university unions. Like Cambridge and Durham, Oxford’s “Union Society”, is an exclusive debating platform that carries hefty membership fees. At present, it costs £278.10 to join (however it offers “access membership” at £164.80).

The platform is seen as being uniquely prestigious. In recent years the society has hosted Stephen Fry, Akala, Mary Berry, Morgan Freeman and Ian McKellen. And the union’s website states: “Our members are given the chance to meet their heroes, and challenge those with whom they disagree.”

In response to the criticisms, current union president Genevieve Athis has described the society as the “the last bastion of free speech in the Western World”. She tells gal-dem: “From its foundation, the Oxford Union has placed a high value on the voices of both its members and its guests. By inviting speakers that are sometimes considered to be controversial (not only on the right but on the left – for instance Slavoj Žižek) we aim not only to host them, but to challenge, explore and criticise their ideas.”

But many students argue that the guise of “freedom of speech” often serves to condone harmful rhetoric, all in the name of debate. Emily, a third year Oxford English student who signed the open letter, tells gal-dem she doesn’t think it’s at all possible to tackle the problem of the far-right in this sort of forum. “I’ve been a member of the union since first year and used to listen to a range of different speakers, even if I don’t always agree with their politics. But in giving an unfiltered platform to racists, anti-semites and misogynists, the union simply amplifies hatred.

“I don’t think listening to a fascist talk for half an hour and then hearing them take questions from a few PPE undergrads is a good way of critically examining these ideas – it simply legitimises them.”

In the case of Katie Hopkins, a campaign representative also tells us that “free speech” and “fair debate” are obscured: “The Oxford Union leadership needs to answer exactly which of Katie Hopkins’ ideas are up for debate.

“Is it her view that migrants are ‘cockroaches’? Is it her statement that ‘Islam disgusts me’? Or is it her advocacy of the white genocide theory that was explicitly referenced by the Christchurch mosque shooter?”

Radicalisation is a real concern of boycotters. In November 2018, the union came under fire for its invitation to Steve Bannon, founder of alt-right news website Breitbart News. A large group of students, academics and Oxford locals turned out to protest outside the event, which was postponed by an hour. The campaign rep tells us that among opposition, Steve’s attendance also emboldened his supporters. “Outside the talk, a small group of Neo-Nazis performed Hitler salutes and physically attacked two women.

They emphasise that although physical turnout of fascist supporters might be small – the online impact is particularly large. “Their video of former EDL leader Tommy Robinson’s talk has been viewed 1.5 million times.

“The Oxford Union are directly complicit in both endangering students and residents in Oxford, and in aiding the radicalisation of far right terrorists the world over.”

As president, Genevieve tells us she thinks Thursday’s debate will be a level-playing field. “This term, Katie Hopkins will be one of eight speakers in this Thursday’s No Platforming debate in which any member will be able to challenge our guests on their views, as has happened frequently in the past.”

She also rejects the idea that the society condones facism and racism: “Just last term, a disciplinary committee suspended and fined a member for goose-stepping [a march associated with the Nazis] on our premises at our Hilary Term ball, illustrating the attitude we take towards such abhorrent behaviour.”

But in the current climate, boycotters say this won’t be enough. The campaign feels strongly that now, more than ever, students and allies must stand up to racism and facism where we see it.

They tell us: “The last few years have seen the far right become more and more powerful across the world. There are far right governments in office in the USA, Brazil, Hungary, Israel and Italy – while increasingly violent fascist street movements are gaining strength.

“This movement is an emergency.”