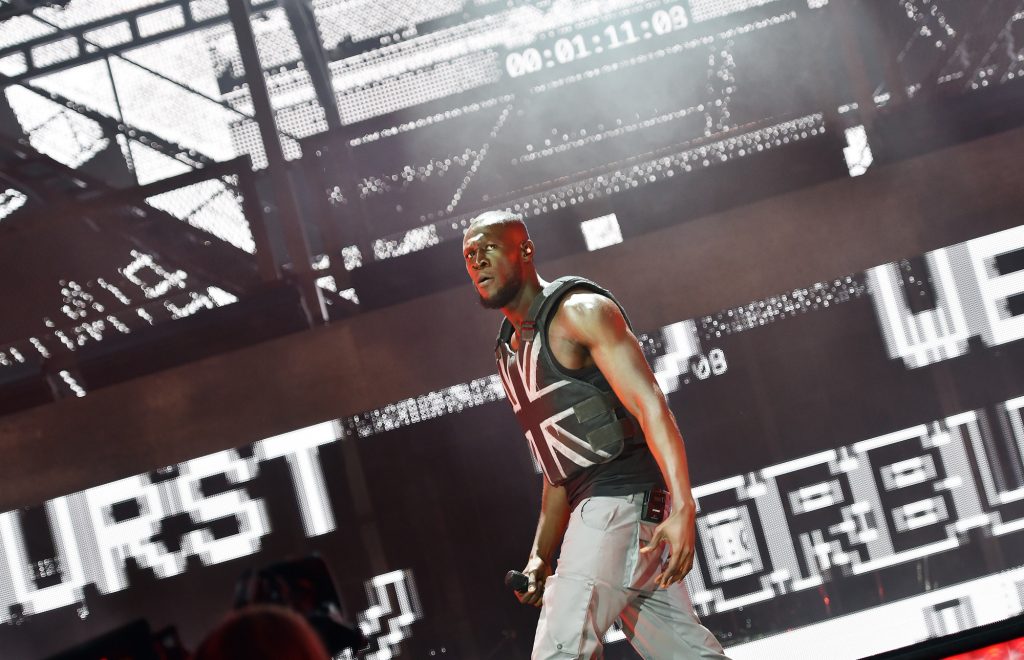 When Stormzy took to the Glastonbury stage on Friday night, I was standing (almost) front and centre. I had endured a drunk, white woman – Zara – stroking me, squeezing my hair and mumbling about us “all being human” for the entirety of the George Ezra set, just so I could make an optimally-timed dash to the front. I was rattled by the end of the Ezra set, praying that the indignity would all be worth it – thankfully, Stormzy aka “Big Mikey” aka “Stiff Chocolate” definitely did not disappoint.

As I stood in the darkness gazing at the stage, I contemplated how magnificent the universe can be at times – that a 25-year-old, dark-skinned black man was about to take to one of the biggest musical stages in the world and perform music from one of this country’s most maligned music genres.

“We are here, we have been here and we are not going anywhere”

As the lights came up, a clip played of Stormzy discussing his performance plans with Jay-Z (who was the first hip-hop artist to headline the festival in 2008); Jay-Z’s advice was beamed onto the big screens, finally ending on a repetition of “that’s culture”. I screamed – but few of the white people around me seemed to get it. I had been hoping for this since Stormzy had been announced: a celebration of black British culture to be viewed by millions of people globally. We are here, we have been here and we are not going anywhere. Following the Windrush scandal and rising xenophobic attacks after Brexit, we needed a headliner that would challenge the status quo.

When Stormzy emerged rapping to ‘Know Me From’, wearing a stab-proof vest painted in a greyscale Union Jack with the areas surrounding Croydon appearing behind him, he was sending a message about knife crime, but also signifying the complexity of what it can mean to be black British in a currently divided nation. Since the performance, Banksy – an artist who never shies away from a strong political statement – has claimed that the vest was designed by him. It feels like a match-made in heaven.

Prior to the start of ‘First Things First’, David Lammy’s words regarding the criminalisation of young black men were beamed onto the stage: “If recidivism rates are 46% for black men then something isn’t working”. For those of us who have read the Lammy Report, it felt like a small triumph that something so essential should be shoved into mass public consciousness – even if only for a few seconds.

Stormzy created a rare moment of stillness too, with a performance by Ballet Black – a ballet company for those of black and Asian descent. Their story on the lack of ballet shoes to match black skin tones highlighted how eurocentrism and colonialism still plays out in our society today. Having recently written about how this continued colourism manifests in my own profession of medicine through single skin-tone medical patches and plasters, it felt monumental to have the conversation elevated to a major stage  – long may it continue.

“His performance was undoubtedly iconic and worth pushing through thousands of people and abandoning my squad at the back for; it raised important questions about Britishness, but even more questions about the festival in general”

For me, the highlight was seeing black girl magic in the form of ten-year-old Princess K, who took centre stage in the dance-off in her bright orange Adidas tracksuit, amongst a sea of men and boys in black tracksuits. Followed by a trail of young boys on bikes, it felt like Stormzy had brought a piece of youth housing estate life to Glastonbury’s Pyramid stage. The image of young black men gathered in groups that is so often portrayed negatively and turned into “gang culture” became a moment of pure joy.  It was incredible to see a young black girl highlighted in a scene that is overwhelmingly dominated by men. My only sadness is that her talents seem to have been greatly overshadowed by those of #AlexFromGlasto, a 15-year-old who was plucked from the audience to perform the track ‘Thiago Silva’ with South London rapper Dave during his Pyramid set. He reportedly now has a deal from boohooMAN and was heaped with praise on Good Morning Britain; it’s a shame but unsurprising that Princess K has not received the same accolades.

The icing for many has been Stormzy getting the crowd to shout “Fuck Boris”, and doing a reload so we could experience the pure delight of saying it twice. After all, we will likely soon have a prime minister that has referred to black people as “piccanninies” with “watermelon smiles” and we have had very little say in the matter.  While the shouting did feel cathartic for those of us that feel politically disenfranchised, I did want Stormzy to say more on the racial issues that he raised – though perhaps he felt his music was doing all the talking.

“There will be resistance, but it is only right that Britain gets a music festival that reflects our rich tapestry and complicated history”

Stormzy’s Glastonbury performance was undoubtedly iconic and worth pushing through thousands of people and abandoning my squad at the back for; it raised important questions about Britishness, but even more questions about the festival in general. Next year is the 50th anniversary of Glastonbury – which has always been much more than a music festival – serving as a space where political statements are made and organisers connect. The booking agents have tried in many ways to make the festival more musically inclusive this year, with the Silver Hayes area playing some of the best garage, grime and house throughout the festival and artists such as Dave, Stefflon Don and Ray BLK performing. But diversity has not extended to every part of the festival.

We must see a greater array of people of colour-led organisations in the Greenfields area, leading talks in the Left Field tent as well as greater diversity amongst the stall vendors and those applying to be part of the Healing Field. We need discussion about the exclusionary cost of attending. Glastonbury should no longer solely be a festival of those that “don’t wash their legs”, take copious amounts of drugs and pop on a bindi for the weekend – it is better than that. There will be resistance, but it is only right that Britain gets a music festival that reflects our rich tapestry and complicated history. Stormzy did not just headline, he started a vital conversation on the future of what is a much-loved British institution.