gal-dem speaks to the women of colour-owned plaster brand currently embroiled in a controversy with Tesco, after the supermarket purchased their products ahead of launching their own multi-tone plaster range. On social media, Tesco is being accused of ‘copying’ the brand. 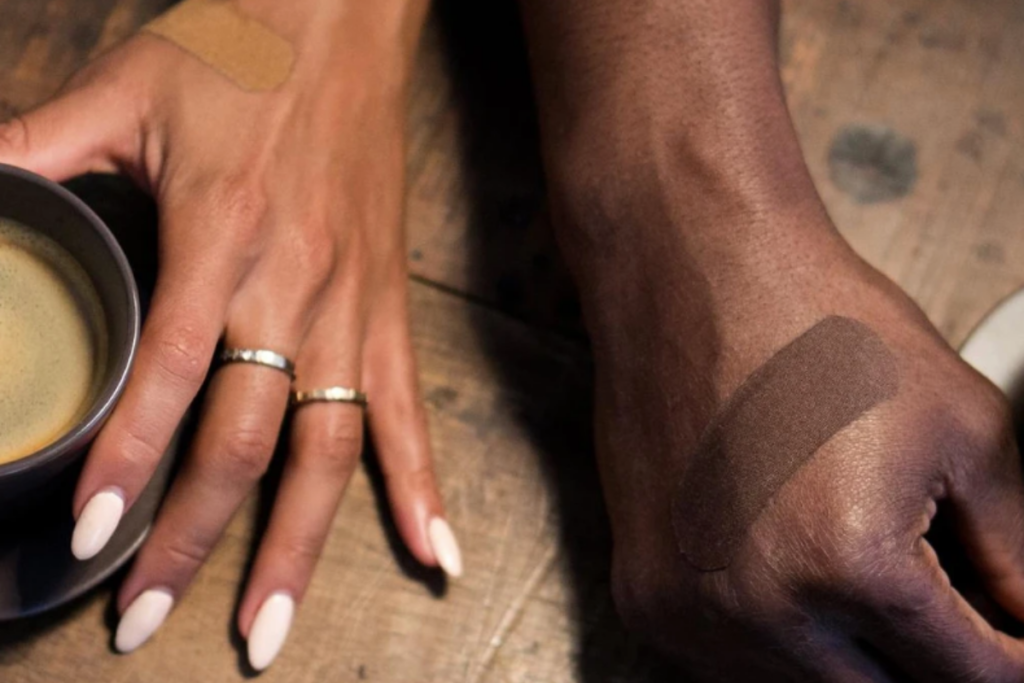 From foundation to hosiery, finding the right shade of “nude” has historically been a challenge in the UK if you don’t have pale skin. On 24 February, Tesco announced their new campaign “about bloody time” making them the first UK supermarket to stock diverse skin tone bandages. But, alongside allegations that Tesco has not been paying influencers to promote the new products (a claim which they deny), a now-viral tweet by activist and public speaker Lovette Jallow, told a different story. “My best friend created skin coloured plaster many years ago,” she writes. “Pitched the idea to tesco two years ago. They took in samples and then copied her work, repackaged it and shut down yet another small poc owned company.”

The brand Lovette was referring to was Skin Bandages by Nuditone, and their collaboration with British brand N​ünude. Joanne ​Baban Morales founded N​ünude back in 2017, with research starting in 2013. N​ünude is a fashion brand with a wide range of skin-toned underwear, swimsuits, tracksuits and now plasters. The idea came after visiting her home country of Colombia where shapewear is a huge market. In the same year N​ünude launched, they had a viral campaign which managed to change the Oxford dictionary definition of the word “nude”.

Speaking to gal-dem about the controversy, Joanne explains that she had made a conscious effort to create an inclusive brand, with nude products for all shades and sizes. “I hate using the word ‘empower’ because it’s so cliche,” she says over the phone, “but we empower women.” Most recently, they’ve had a campaign featuring people with visible disabilities, and they host events and workshops promoting self-confidence.

Around January 2019, she was contacted by Vivian Murad, a health care entrepreneur and founder of Swedish company Skin Bandages. The two decided to collaborate and sell multi-toned plasters in the UK. “My true belief is that we as humans shine our brightest when we collaborate for mutual causes. We need representation, inclusivity and the celebration of diversity as they are fundamental elements for humanity to blossom,” Vivian wrote in their joint press release.

Tesco’s campaign tagline is “about bloody time”, which Joanne says she found interesting. “They’re not the first, we’re not the first,” she says. If you’ve read Malorie Blackman’s famous novel Noughts & Crosses, the concept of darker plasters has been around for years and other brands such as Fortuna plasters, South African brand Plasta and Tru Colour have existed since at least 2013.

Growing up, Joanne attended a school that was made up of around 90% white pupils. “Everyone was like ‘you have dark hair on your arms, you’ve got dark eyebrows, your skin’s not pale like us, we can’t work you out,” she says. So when it came to these plasters, “we can only imagine what other people felt like that are not being represented. So let’s just include everyone because we do believe in equality”.

As the Skin Bandages are a medical product, getting them made for the UK took some time. They decided to use fabric over rubber as it blends better with skin. The two travelled around Europe finding the right factory. They officially got all the certificates in place in the UK in July 2019.

Prior to their collaboration, as far back as 2017, Vivian contacted retailers Boots. “They said no, it’s too niche for us.” She also tried Tesco but with no luck. Retailers were contacted again in 2018 and in 2019. Then in July 2019, Tesco made an order from their Etsy website. “We cross-matched the address and it was Tesco HQ.” They checked LinkedIn and found the order was made by a product developer for health and beauty. “‘They’re going to stock us!’ That was our immediate feeling – naive but that’s what we thought.” Vivian sent Tesco a letter the following day sending their thanks, asking for feedback and for Tesco to contact them. They didn’t hear anything back.

“‘They’re going to stock us!’ That was our immediate feeling – naive but that’s what we thought”

After the order, Joanne then sent a LinkedIn request to the Tesco product developer but it wasn’t accepted until January this year. “At that point, coronavirus had taken over so we were aware that a lot of retailers were not going to take orders because they were trying to sort out their supply chain,” she says. “So we left it and thought okay once all this settles down.” The next thing they knew Tesco had launched their own range of plasters.

A spokesperson from Tesco told gal-dem that they had not had any commercial conversations with Skin Bandages and said that when looking to add a colour variant of a product they already have within their range, they look to do this with existing suppliers.

The spokesperson added: “We made the decision to sell a more diverse range of plasters after a colleague saw a tweet which described the emotional response one man had the first time he used a plaster that matched his skin tone. No UK supermarket had ever stocked plasters in a range of skin tones before and we saw this as an opportunity for Tesco to lead the charge and make a difference.” The viral tweet dates back to April 19.

American brand Tru Colour also sells similar products, Joanne notes, but they are stocked by supermarket giants. “Target decided to work with them and push their brand. Why not work with us? We’re the ones connected to the people that had the demand for it.”

She is under no illusions that plasters can be patented, something Kelly Hudson, Director and Trade Mark Attorney at ACID Legal Affiliate McDaniel & Co., reiterates. Speaking to gal-dem Kelly says: “While copying is generally considered unethical, the law provides no protection of generic ideas or concepts. Consequently, if Tesco has copied the concept of plasters for various different skin tones from N​ünude, it does not automatically follow that there has been an infringement of an intellectual property right.”

Unfortunately, this isn’t the first time Joanne believes her ideas have been replicated by larger companies. After the launch of N​ünude’s reversible swimsuit in April 2017, a large clothing company released nude bodysuits in 2018, with very similar campaign photos.

Joanne recently went to Tesco “to see what the fuss was about” and found the colour and the texture to be almost exactly the same as Skin Bandages. “Ours is softer than theirs that’s the only difference,” she claims. But, off the back of this controversy, Joanne thinks it’s a great opportunity to talk about “the frustrations for young entrepreneurs with startups”. More than anything, she wants big companies to think about supporting and collaborating with smaller brands which have already put in the groundwork.