gal-dem in conversation with Thali Lotus from CAYA Soundsystem 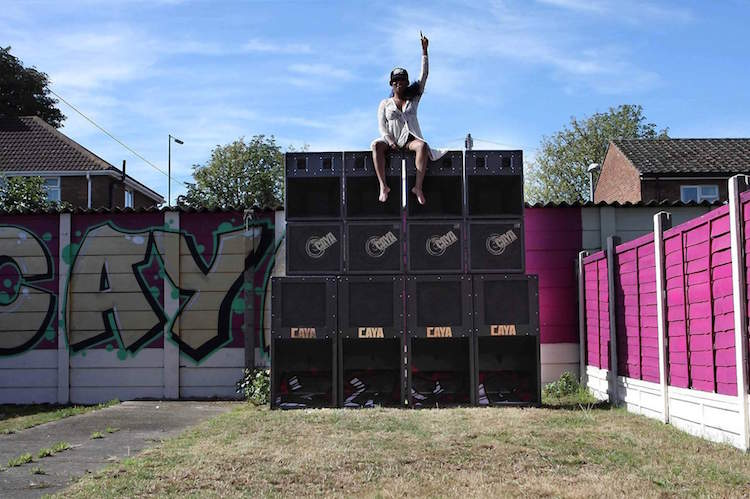 Reggae sound systems started to gain popularity in the UK in the 60s and 70s when large numbers of Jamaicans had settled after migrating during the windrush generation and blessed the UK with the music they brought. Sounds would perch up on street corners, in venues and in warehouses, bringing music that wasn’t played on the radio to the masses and helping people retain a connection with the rich culture that they had left behind. There is a whole generation of established sounds on the UK scene carrying the torch of this legacy forward: one of which is CAYA. But what’s different about CAYA is that Thali, a woman, is running the whole show. gal-dem caught up with her to delve deeper into the ethos behind CAYA.

gal-dem: As a woman who is building and running her own sound system, you’re definitely making waves in the Roots & Culture scene. Tell us about the birth of CAYA Soundsystem.

Thali: CAYA came about around October 2015 and since then, I’ve been on an amazing journey. I consciously sought guidance from the elders and met with People’s Sound, Festus Coxsone, Channel One, Young Warrior, V-Rocket, Zions and other sound systems.

I visited Ras-Tom from Black Cat sound system in east London and he mentioned that back in the day, sounds used to say to him, “Come as you are.”  What they meant by that was that was if you have the right spirit then just “Come As You Are”, no matter what you had. In that instant I thought of the acronym CAYA.

What drove you to meet with the elders and why did it feel important to do that?

I felt that to go forward, I had to go back first. To be able to hear the elders’ stories and use their tools gave me huge insights. If they were able to make sound system work in those eras (60s and 70s) with less resources and no social media then I could definitely do it now. Even without the internet and MP3s they would make sure that they were always on the ball and ready to play out. It’s inspiring to think about their dedication.

What is the ethos at the core of CAYA?

CAYA is the musical hub of the Come As You Are Enterprise. Everything that I aim to do through CAYA will be using music to educate, entertain and bring people together. The ethos is music which is non-judgmental and inclusive. “Come As You Are” it’s about people coming as they feel best. What matters is what’s in the heart and bringing this forth is the aim of CAYA.

My role model is my Grandfather who came from Guyana to the UK in the 1950s. He was orphaned aged 12, and as a way to better himself he made a decision to come to the UK and travelled for three weeks on a ship to an unknown land. It was when I was buying my house in Bedford that his life experience really hit home, because people in London were saying to me “Who do you know in Bedford and what are you going to do there?” I said that my Grandad travelled across the globe to an unknown place so I’m happy to go 50 miles up the M1!

How did growing up with a sound system impact you?

My Dad had a sound system called B-Force, who played lovers rock and rare groove, so me and my siblings grew up with sound around. If I’m honest, so much happened during my childhood that I have always seen music and vibration almost like an invisible friend, something that I could laugh or cry to and be free with. I felt that I’d grow up to be a creative of sorts.

Do you feel that what you’re doing is important for women?

My daughter leaves notes for me to say that she’s really proud of me so I know that I’m an inspiration to her at the very least! When I was younger my imagination, dreams and thoughts were never represented in anyone I saw around me. I want my daughter to have that for herself.

Women have always been on the sound system scene but their story is hidden. Apart from V Rocket & Rebel Rocket, both of whom have been very supportive, it’s very rare to see a female-run sound system.

How does it feel to see your dreams come to fruition?

Every day I wake up and I feel that I’m living my life and not just watching it go by. I was a young single Mum and for many years I have done the usual routine of getting up, going to work and doing the so-called right thing, getting my degree and masters. It’s mind-blowing to think that my little idea has manifested into a big sound system.

Finally, what can we expect at the launch event?

The launch is on 18 November at Club Sixes in Bedford from 22.00. The venue is very supportive of all communities and their music and the night is going to be hosted by original UK sound system selectors Father B (Original People Sounds) and Festus Coxsone (Coxsone Sound) with Ramon Judah on vocals, Valerie Vybz (founding member of Ackabu) and of course me.

Prior to the event there will be a free screening at 19.30 about two educational and historical films: Duke Vin and The Birth of Ska and Peoples Soundsystem – The Story of Sound Systems in the UK.

Finally, everyone is welcome, to celebrate positive music and energy and to just come as you are.

For more information about the CAYA Soundsystem launch, head over to the Facebook event.