The new series of Killing Eve shows interesting parallels to how people are treating comfort food from their cultures during lockdown. 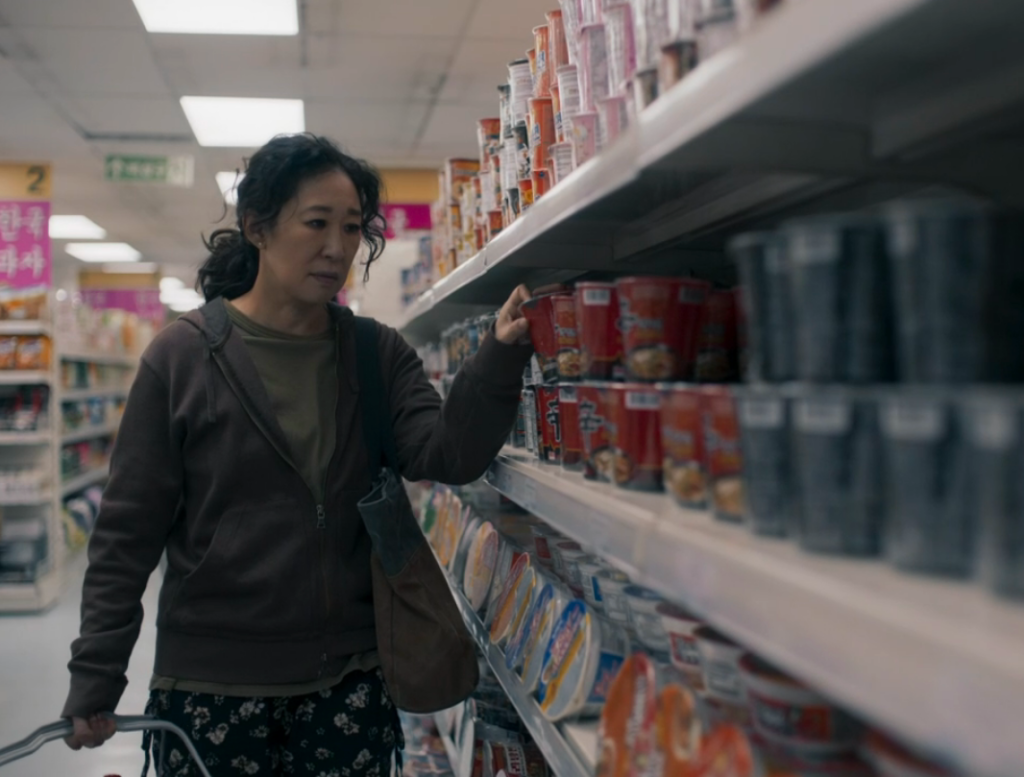 Food has always been a big part of Killing Eve. From Villanelle’s many indulgences to the running sausage jokes in Season One, food has signified excess, control, power and of course, hunger, in its many forms. As Season Three begins, it’s used as a shorthand for something new: sanctuary.

When we first see Eve in the first episode of the latest season, the camera pans across several aisles of what looks like a Korean supermarket, before spying her through a shelf of crisps. “Is that Shin Ramyun she’s holding?” I ask, squinting at the familiar, fiery red packet in Eve’s hand, before letting out a delighted, “It is!” as the camera briefly lingers on the wall of packet noodles that Eve, eyes glazed over, plucks from and throws into her basket. As she moves through the supermarket, she occasionally winces in pain. The harsh lights combined with the dull palette means that she looks grey. Tired. “That is a lot of Shin Ramyun,” my partner says, as we watch the wave of noodles, red wine and other cheap comfort foods (Lotte Koala biscuits, Milkis cans, crisps) get bagged by Eve at the checkout.

Shin Ramyun is Korea’s best selling instant packet noodle, and one of the most recognisable in the instant noodle market. Spicy, beefy and filling, it is, as Noah Cho says in his ode to the joys of eating Shin Ramyun with cheese, “something for the dark night of the soul, a thing to soak up your regrets and get you through a rough day”. It is exactly the food that Eve needs as she tries to recover after the trauma of what happened in Rome, when Villanelle shot and almost killed her.

The supermarket isn’t the only place Eve has taken refuge in. She now works as a prep chef in the back of a Korean restaurant making mandu and chopping meat; later we hear that the manager knows her auntie (perhaps the first time we see a reference to Eve’s family). All this takes place in New Malden, which has the biggest population of Koreans in Europe. Eve’s withdrawal back to her Korean identity at the start of Season Three is perhaps overdue. Eve often appears in a world without any other East Asian characters, where her identity has mostly been formulated around work. We aren’t given much background to her character beyond her marital issues, and so our introduction her food choices allows us to get to know her through another lens. In the run-up to the season, Sandra Oh told us to expect to see her going “back to her roots, back to safety and comfort”.

It reminded me of how my siblings are sending me more photos of home-cooked food than usual during lockdown. Like many people who are stuck at home at the moment, they’ve been baking banana bread. My friend Jess is posting more Instagram stories of homemade youtiao, soy milk and congee than I’ve ever seen her do before. I’m pretty close to making noodles from scratch myself. With a lot more time on our hands, many of us are investing more of it in cooking, particularly in comforting, traditional food that our parents or wider culture make.

Whether it’s processed or home-cooked food, when people feel uneasy their reaction is to revert to what makes them feel comforted, or closer to families and friends that they’re now apart from. Sales of flour are up as people bake more bread, Kraft Dinner and other old boxed meals are making a comeback and people are cooking more dishes from their own cultural backgrounds. My last visit to my local Chinese grocery, just before the official UK lockdown began, was prompted mainly by a fear of running out of jasmine rice, spam, and Indomie packet noodles. When I got there, East Asian students in masks and goggles were filling up huge suitcases with rice, pickled vegetables, assorted noodles, and frozen dumplings. For many, foods from when and where they felt safest, often family homes when they were younger, were suddenly what they needed most.

But Killing Eve complicates the narrative. Despite Sandra Oh’s description of Eve’s decision to move to New Malden, you wonder about how comfortable Eve actually is there. The food she surrounds herself with isn’t shot with the usual colour or close-ups and we never see her eating, taking sustenance from, or enjoying any of it. She turns down an offer of an easier, better tipped front-of-house job from the restaurant manager so she can stay in the kitchen, and yet is often irritated by the constant chatter of her younger food prep colleagues.

The show clearly telegraphs that her tiny flat, her workplace, and the supermarkets are the main places she frequents nowadays. Her life is much smaller than it used to be. Because she is recovering, she has retreated back to somewhere familiar where she knows the people and the boundaries in order to do so. She might feel safety, yes, but feeling comfortable in domesticity has never been her strong suit. Her new life is a temporary reprieve and inevitably, as the series moves forward, she’s suddenly drawn back into the world of MI6. We see less and less of Eve in New Malden.

“My last visit to my local Chinese grocery, just before the official UK lockdown, was prompted mainly by a fear of running out of jasmine rice, spam, and Indomie packet noodles”

Sadly so far in Killing Eve, we don’t get to see her actually eat any Korean food. Perhaps this is partly down to the writing not being very invested in exploring Eve’s relationship to her family or her Korean heritage. IMDb writing credits for the show suggest that almost all of the writers for Killing Eve are white. It is frustrating, for example, that we don’t hear any more about Eve’s aunt, who is worried about her

I have to wonder whether our own sudden increase in making nostalgic, traditional food will be a temporary reprieve for all of us too. It’s productive, and in many cases is a conduit for communicating with people you can’t be in close proximity to, through recipes, tips and encouragement. It’s a welcome breather from the 24-hour news cycle and the world outside more generally. But, from the increasing frequency with which I’m seeing tweets about missing food from favourite restaurants, or being tired of cooking nearly all the time, I suspect once lockdown is relaxed, home cooking will gradually decline to pre-pandemic levels.

I find it interesting, that in previous seasons, the times we find Eve enjoying the act of eating are often when she’s having fast food – burgers, or fried chicken. During these periods she’s also working – being a secret agent, investigating Villanelle and people like her. Eve’s enjoyment on these occasions is linked more to the thrill of her work than to finding comfort in the food. Her actual hunger is an embodiment of the hunger to find whoever it is she’s trailing.

If cooking and eating nostalgic Korean food in New Malden, doesn’t make Eve feel more at ease, what will? Then again, perhaps seeing Eve in a comfortable place – emotionally, as well as physically – would mean an end to Killing Eve itself.

Killing Eve is on iPlayer now, with new episodes airing every Monday