Is the election of Donald Trump a white man backlash? 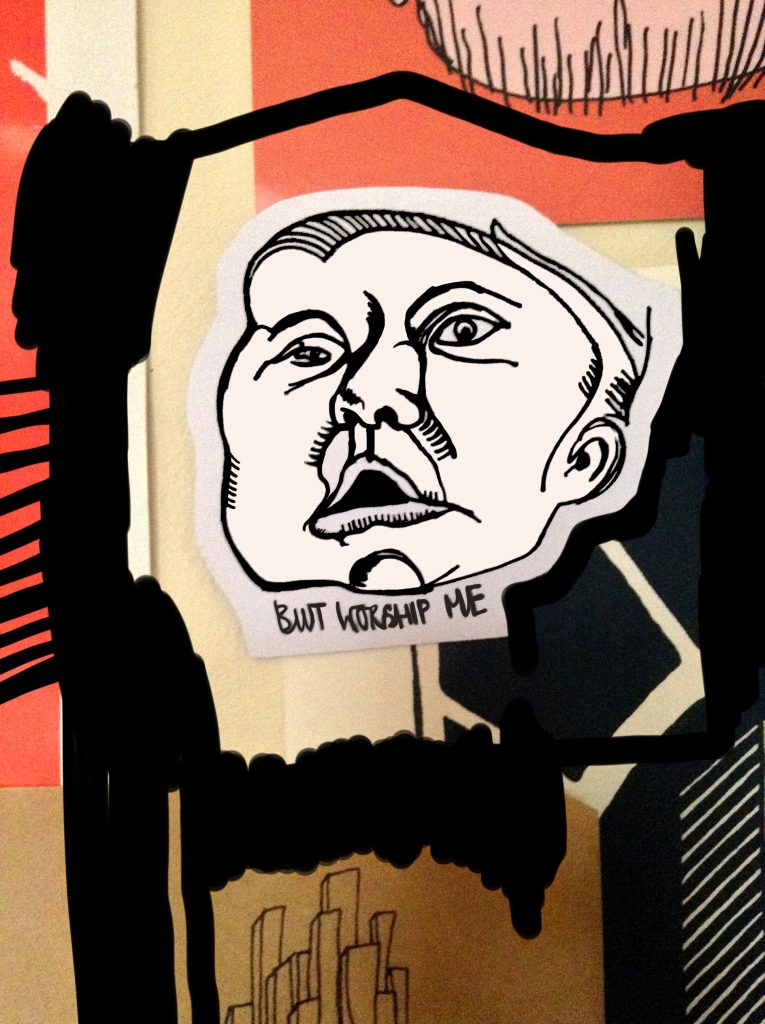 White America is on the edge. Specifically white poorly educated America and high-income (fair to assume predominantly white too) earning America. They voted for Trump. In the case of the former, they’ve had to watch a political establishment run the America show without giving them a second thought for decades, income disparity between them and their wealthy counterparts increase and their labour be outsourced by billion-dollar profit-making multinationals. In the case of the latter they’ve had their social, political and economic security compromised by Wall Street and big organisations. 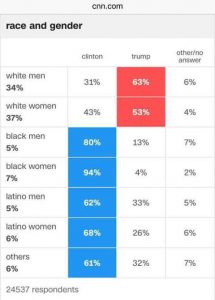 I’ll be the first to say that some of these people are xenophobic in every way imaginable. America is deeply racist. It is also sexist, ableist, homophobic and anti-Islamist. However, I’ll also say that many of these people have legitimate concerns (and indeed not all of them are heinous human beings). They’re worried about taxes, IS, the economy. The thing is, these concerns also ring true for ethnic minorities (after all Trump managed to appeal a great deal more to the Latino and African-American electorate than expected), the LGBTQIA+ community, disabled Americans and other minoritized groups in the US today. It’s also true for those earning less than $30,000 a year who, overall voted for Clinton. Only difference is there is a hell of a lot more white, able, cisgender, heterosexual Americans to shout about it than not.

I’m gutted it’s had to come to this, but some of the American people felt like Trump was a guy who could give them what they wanted. Can we really say with confidence that Clinton looked like she would? I don’t think anyone was convinced. What Clinton should have done during the campaign was get a running mate that could schmooze the hell out of these voters, or at least the sane among them. A democratic, slightly conservative Mike Pence, aka McCain, would have boosted her chances of winning exponentially. Tim Kaine was damp-squid who semi-appealed to the Latino vote, which actually, didn’t really matter in the grand scheme of things (by 2043 this will be a different story). Had she done that – been willing to swallow her pride and share the limelight a bit – I believe this would have been a different story.

This entire affair throws me back to A-Level modern British history. One of the most common exam questions to come up was this: “Was the <insert winning party here> victory in 19xx down to <insert winning party here> strengths or <insert losing party here> weaknesses? In this particular scenario, the answer seems to be a little bit of both. Despite saying very little on policy at all Trump was an orator extraordinaire and Clinton, well, wasn’t. I understand why – she didn’t want to make promises she couldn’t keep, but this tactic didn’t work.

‘America is deeply racist. It is also sexist, ableist, homophobic and anti-Islamist.’

I don’t want to blame her too much though. I feel really bad for Clinton on a personal level – whatever her policies towards African-Americans, mass incarcerations et al – the woman came from humble beginnings, worked extraordinarily hard, became one of the most qualified human beings ever to gun for the White House, was the model of conservative Christianity (standing by her man despite being cheated on, Monica Lewinsky we cool though) and still, STILL wasn’t allowed to take the presidency. It seems so unfair.

What is fair to say is that Western politics has gotten to the state of complete and utter inertia, hence why Trump, posing as an “outsider” (lol, the irony) was so appetising. He says his elevation to the oval office “is a movement comprised of Americans… who want and expect our government to serve the people, and serve the people it will”. The last part at least seems true. For too long a section of America has felt ignored, hence the problematic phrase  “white man backlash” – the office handing over the reigns to a political and social elite who have dominated the US body politic since the inception of the nation. Both parties will have to re-examine who they are and what they represent. Business-backed and lobbyist Republicans will have to reevaluate their life choices. Though they now control the White House, House of Representatives and Senate so are probably feeling pretty chill at the moment. Perhaps this is the reset button that American politics needed. The two-party system was always flawed but its retrenchment in recent years means perhaps the system is too far to gone to disentangle itself. Blowing it up – which is what America is doing today – I think is terrible, but it wasn’t Trump’s idea alone.

Donald is  just one of many vomit-inducing pricks of the world. People like him have always existed. They may have been under different guises – Reagan supporters, Palin lovers- but they’ve always been there. What I’m really worried about is the KKKish, neo-Nazi sentiment that will grow out of this. We all know some party politicians are outright xenophobes – using the word fag and n word with insouciance behind closed doors – but never has this been allowed to openly and as overtly show itself as it has been today. People who publicly espouse these vitriolic views are normally positioned as the sidemen of politics. This time round moderate Republicans failed to halt the Trump train and Democrats to convert (for this election anyway) right-wing voters disgusted by the wigged anti-hero Americans now call president-elect.

‘Perhaps this is the reset button that American politics needed’

Hey, maybe now is the time for the West to grow increasingly isolationist and segregated. Maybe we should take a bow from the global stage. We have been the main actors, puppet-masters, Iagos of the world for more than half a millennia. We’ve brought in some good, but a whole lot of fucking terrible too.

But back to the US. Trump says “working together, we will begin the urgent task of rebuilding our nation and renewing the American dream”. The American dream, as Guardian journalist and author Gary Younge so eloquently puts it, is a myth. But then again so is Donald Trump. And that is part of his overwhelming popularity. Some of these voters, in my opinion, are looking for something that simply doesn’t exist. But if it’s a choice between the status quo – instability, inequality – and a mythical fantastical magical wonderful rainbow coloured utopia full of economic prosperity, opportunity, low taxes and no terror, it’s understandable to see why this election turned out the way it did.

Basically this my long way of saying this is what happens when you continuously sideline a large chunk of people. I’m not blaming Clinton, I’m blaming the political apparatus. This is like Brexit but with a silver-lining. At least he’ll only last four years – maybe eight. And by then I’m praying America will have learnt how to avoid this flaming hot mess in the future. We, on the other hand, have Brexit forever. How dead.

Still, in both instances it’s a clear show of anger. White America attacked what they believed to be the cause of their misfortune. I think they and the Brexiters went for the wrong targets, aided by a powerful few ushering in scapegoats like lambs for the slaughter. But that’s not the point anymore. Pure and simple, the American people have rebelled.

And this rebellion is called Donald John Trump.