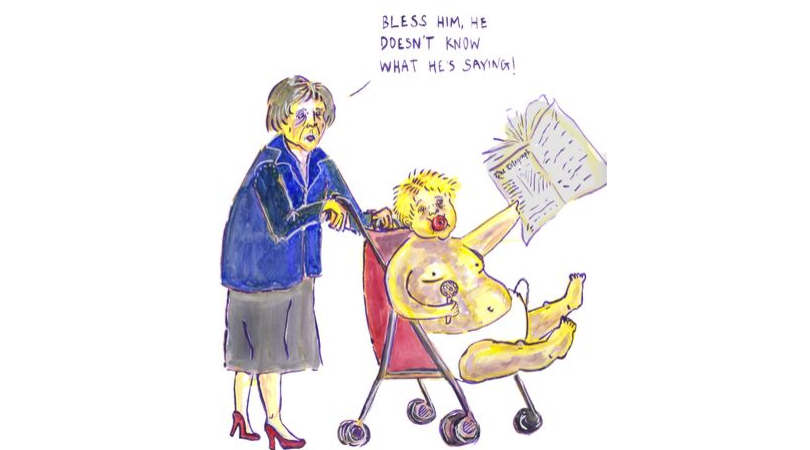 I can only imagine how the footage of Donald Trump and Boris Johnson sitting side by side and laughing at the notion of respect for the UK Supreme Court has made the British public feel. For me, whatever particle of faith I might have had in the rule of law, and for our institutions to at least make sense, certainly disappeared.

Both the UK prime minister and the US president have had to respond to accusations of law-breaking this week. Boris’s trip to New York was cut short by the UK’s Supreme Court finding that his prorogation of parliament was unlawful. Perhaps annoyed as anyone would be at a holiday being unceremoniously interrupted, he responded to MPs with a bizarre series of statements, including that he thought the Supreme Court ruling was “wrong” and that the best way to honour the late Remain campaigner MP Jo Cox’s memory was to… deliver Brexit.

Meanwhile, in the US, the Speaker of the House of Representatives Nancy Pelosi finally announced an impeachment inquiry into the president’s behaviour with Ukraine. It has emerged that during a phonecall, he attempted to coerce his Ukrainian counterpart into digging up dirt on political rival Joe Biden’s son. The president’s response to this information coming out was, unsurprisingly, one of total denial and anger at the suggestion of accountability.

Democratic politicians such as Alexandria Ocasio Cortez (AOC) believe that the Ukraine revelations might mark a turning point in the public perception of the president – that it might be the blow that causes the glass to shatter. It’s more difficult to discern the situation in the UK. The BBC, for one, is too busy being “impartial” by silencing people that call the president’s policies racist to shed any light on what the events of the last few days might mean. But if the unrestrained outrage of MPs questioning Boris is anything to go by, then perhaps something has changed. Watching a prime minister explicitly refuse to be constrained by the highest court in the country might be simply too much for people to reconcile with their existing ideas about how justice in Britain works.

Even so, the collapse of the rule of law in people’s minds feels like it could go one of three ways: people might disregard common sense in favour of a cult of personality, feeling like they can trust nothing except their leader (as Vox and Ilhan Omar have characterised people’s reactions to the president). People might take refuge in post-truth humour and memes and neglect to act. Or, finally, people might use it as an opportunity to diagnose the systemic problems that have led us to this place, and work to address them.

We have seen plenty of evidence of the first and second options, and perhaps not enough of the third. Boris and his supporters nudged the British public towards the first option on Wednesday, when they painted a narrative of a public that might see the Supreme Court verdict as just another example of a mighty institution trying to silence “the people”. There are even reports that Downing Street has been illegally using focus groups to test “Trust the People” as a potential Tory campaign slogan. Personally, I find the second option compelling, particularly after watching Donald call the now-infamous Ukraine conversation a “perfect phone call” that “couldn’t have been nicer”,  as Melania stood by him grimacing and pouting.

“‘The people vs the elites’ is an incorrect characterisation of a situation involving two white male politicians, one a billionaire, and the other an Etonian, claiming to stand up for the rights of some disenfranchised people at the expense of others”

But as the Guardian’s Frances Ryan has said, the UK left needs to be focusing all its attention on bringing marginalised voters into the fold in time for the next general election, whenever it may come. She notes that low turnout has often plagued British politics and this is made even worse by the lack of representation in this turnout – in terms of ethnicity, class, and disability. As she explains, and AOC’s historic win in the US has recently evidenced, expansion of the electorate – not just in terms of numbers, but in terms of demographics – generally benefits progressive agendas.

Donald and Boris are doing all they can to use the “people vs politics” narrative to their own advantage. Perhaps this is easy when “the people” they are able to galvanise do not actually make up a significant majority, and exclude (or rather, deliberately demonise) a number of marginalised groups. “The people vs the elites” is an incorrect characterisation of a situation involving two white male politicians, one a billionaire, and the other an Etonian, claiming to stand up for the rights of some disenfranchised people at the expense of others. We need to make it clear moving forward: we are also “the people”. The migrants, people of colour, and otherwise disadvantaged people that Boris and Donald are so fond of politically harassing and scapegoating are also “the people”.

We cannot afford inaction, even if action right now feels pointless and difficult. Anyone that can, and especially those of us from minority and marginalised backgrounds, should consider greater public engagement with political conversation in the run-up to the next general election – whether that is by attending existing forums for these discussions (I attended a brilliant one in Coventry recently) or by door-knocking and canvassing.

Personally, I never felt like I could do these things – they felt too awkward and I didn’t believe they would make a real impact. But I think the time has come to try whatever we can. The “rule of law” might be an illusion in the UK and US today, but there might still be hope of salvaging some shred of democracy.

Here are six things you can do to oppose Boris Johnson