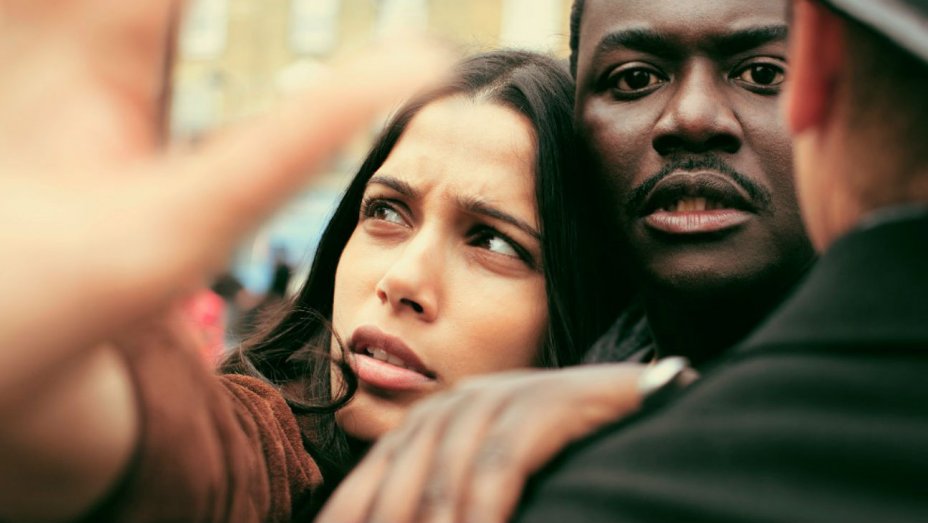 I was first introduced to Guerrilla as I made my way onto the platform at Bank underground station. Welcomed by a black power fist, the promotional posters for the new six-part series on Sky Atlantic piqued my interest immediately. The show’s roster is impressive: it is written and partly directed by John Ridley, the screenwriter behind 12 Years a Slave and American Crime, while Idris Elba serves as both the executive producer and cast member, and Freida Pinto stars as the lead. The premise was also promising – set in London in the midst of the 1970s black power movement, Guerrilla seemed to illuminate a historical moment that is often glossed over and undermined.

The UK black power movement is one that often takes a backseat to its more explosive and prominent cousin in the US, however, it’s a moment in history that has come to the forefront of British social and political consciousness in the last few years. With the recent death of Darcus Howe, a central figure in the movement, and the upcoming 40th anniversary of the Battle of Lewisham, the premiere of Guerrilla couldn’t be any more timely. It follows in the footsteps of an increasingly long list of shows headed by people of colour, and when you consider the glaring lack of brown faces on British screens, the show’s majority black and Asian cast also indicates that the void of diverse programming in this country is finally beginning to be filled. However, while Guerrilla may signify a shift in popular attitudes to the portrayal of Britain’s violent history of racism, there is a significant demographic that is left short-changed: black women.

At the recent premiere screening of Guerrilla at the Bloomsbury Curzon, this all came to a head. When a journalist and member of the audience asked the show’s writer John Ridley to explain the lack of representation of black women in the series, and if this would change as the show progresses, she was met with furore and dismissal. Ridley responded to the question by explaining that the reason he chose an interracial couple as the show’s lead was because he was in an interracial relationship himself. There are many problems with Ridley’s response, but the most striking is his complete misunderstanding of the question that was asked.

“The British black power movement was known for its diversity and the tireless contributions of British South Asian activists, but this should not minimise the role that black women played”

The question was not about there being a problem with casting Freida Pinto as the lead, but with the lack of black female actresses in the first episode. The British black power movement was known for its diversity, and the tireless contributions of British South Asian activists like Farrukh Dhondy and Mala Sen, and organisations like Southall Black Sisters are undeniable. Therefore, to have a South Asian actress is both historically relevant and welcomed. However, this should not minimise the role that black women played in establishing and championing the movement. The presence of activists such as Althea Jones LeCointe, Barbara Beese, Olive Morris, Liz Obi and Beverley Bryan seem to be painfully absent from the show, and this is at the core of Guerrilla’s erasure.

Subsequent media coverage of the event was riddled with misogynoir and misinformation, with publications like the Independent and I reporting that Freida Pinto was “reduced to tears”. By diminishing the very valid criticism that Guerrilla has failed to represent the black women who spearheaded the black power movement to a “row”, black women are painted as the violent aggressors. If anything, it was the response by Ridley and other cast members that was aggressive – instead of responding to the criticism, they chose to react in a defensive and distasteful manner. To add to this, if the erasure of black women on the show was already not the problem, a picture surfaced of Ceesay posing in front of a black power poster with Pinto’s face superimposed over the face of a black woman. Ridley told the Associated Press that he found the criticism at the premiere surprising, adding: “I would say very sincerely to anybody, if they find fault with what I’m doing or how I’m doing it, you don’t need to wait for me to tell your stories”.  This reiterates the frustrations of many black women: instead of using the criticism as an opportunity to rectify the faults in future episodes, Ridley and his cast have remained self-righteous in their mockery of black women.

“Ridley wrote a piece in 2006 which made the case for the ‘ascended’ African-Americans, who are constantly held back by their crime-ridden and uneducated kinfolk – ‘niggers'”

Ridley’s 2006 Esquire article charged with respectability politics goes further in heightening my scepticism in his ability to portray black British activists – and particularly black women – in a considerate way. In the piece, Ridley makes a case for the “ascended” African-Americans, who are constantly held back by their crime-ridden and uneducated kinfolk. Ridley refers to these African Americans as “niggers”, in a way that is shockingly out of touch and classist. He writes: “Let me tell you something about niggers, the oppressed minority within our minority. Always down. Always out. Always complaining that they can’t catch a break. Notoriously poor about doing for themselves.” In Ridley’s opinion, Condoleezza Rice and Colin Powell, who both served as secretaries of state during the Bush administration, are the personifications of the ascended blacks. On the other hand, the protesters at the Cincinnati Riots of 2001 are brandished as the “niggers [who] fucked it up” – “it” being the respectability that Powell and Rice had earned through their positions in government. The article is reprehensible, and it is disturbing to know that its author has been chosen to humanise black power activists who he would have considered members of the “nigger” cohort had they been throwing stones on the streets of Cincinnati in 2001 instead of London in the 1970s.

Therefore, the question goes beyond merely demanding that black women be written into the history that they helped shape. We must also ask ourselves – once we look past the accolades and the positive critical reception, how fit is John Ridley in heading up a series that sets out the dramatise the UK black power movement, really? When you consider the condescension with which he writes about “blacktivists” who seek to disrupt the fragile position of respectable blacks at the top of the second-class citizen totem pole, how genuine is Ridley in his attempts at shedding an illuminating light on activists in the 1970s?

“A source tells me that at a preview screening a few months back, neither Ridley nor Freida Pinto appeared to have any knowledge of the term political blackness”

Ridley tearfully insists in his response to the journalist that the Curzon that his wife is an activist, an important and inspirational woman in his life who partially lead to his interest in Guerrilla as a project, but this seems to be in contest with the fact that Ridley himself may have had a murky understanding of the nature of black British activism not too long ago. A source tells me that at a preview screening a few months back, neither Ridley nor Freida Pinto appeared to have any knowledge of the term political blackness. This is alarming, especially since political blackness was the central identity that unified black and Asian activists in the 1970s and 80s.

Ultimately, I am doubtful of Ridley’s ability to dignify the black activists who gave their lives to ensuring that people of colour in Britain would be given the humanity they deserve – as is demonstrated by his brazen dismissal of critique by black women and his questionable opinions regarding activism dating back to 2006. But Ridley is right about one thing: if we as black women expect to be represented in media in a way that dignifies us, we need to stop depending on black men like Ridley, who have proven themselves to be unfit and out of touch.