The world according to Ericka Hart

The activist-slash-educator is encouraging you to decolonise your mind and relearn everything you thought about sex, gender, and health care 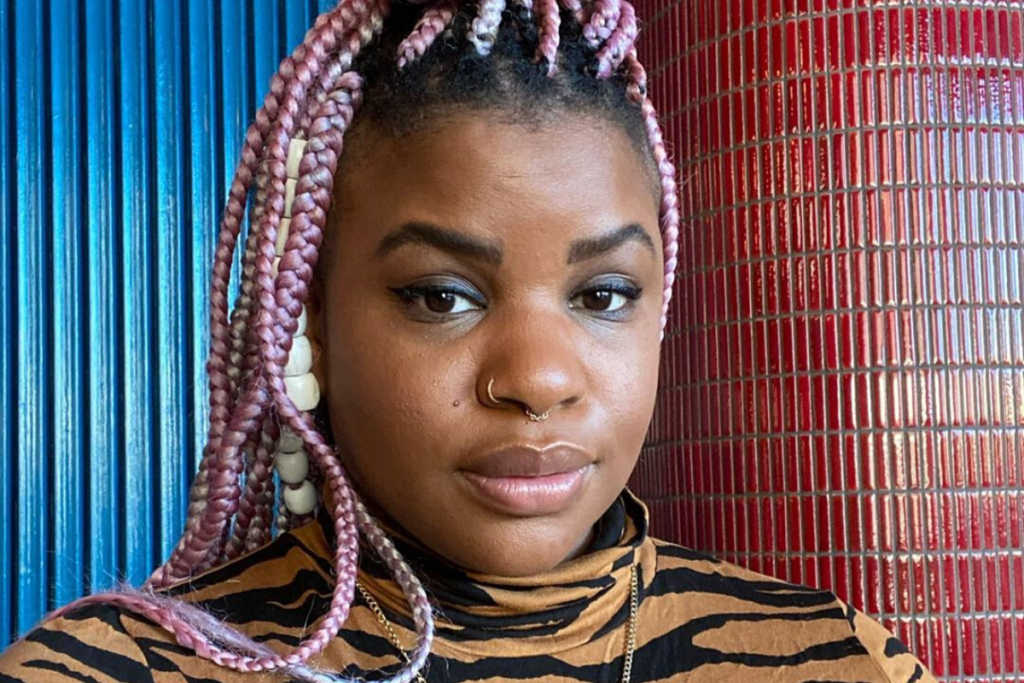 Ericka Hart’s eyes glisten, as they sweep over the audience in the Library Lounge at The Standard, London. We are all present for their conversation with gal-dem’s founder Liv Little, waiting eagerly to hear their insights on sex and relationships.  “PENIS!” Ericka calls and the audience tentatively responds, in kind. “VULVA!” and the staff in the venue, exchange looks and smirks. “PERINEUM!” we all call out, swept along by the defiance of Ericka’s enthusiastic and lighthearted warm-up to the discussion.  Ericka has a bright aura, their curvy frame wrapped in rich blue denim. Their waist-length, golden box braids cascade down to their patent, cream, knee-length boots. Everything about Ericka is present and makes a statement.

Perhaps this is an after-effect of the path they found themselves upon after famously appearing topless at Afropunk in 2016. Ericka was thrust into the public eye. They did what no femme-presenting, black body should do – exist outside of the rigid, suffocating, dehumanising constructs defined for them by a white supremacist societal gaze.

Ericka Hart is a black New Yorker, sexuality educator and race, gender and social justice disruptor, amongst many other things. Their critiques of the medical industry, sexuality, social theory, gender and race, have gained respect in social justice circles and media. For those of us who live entangled within the margins, Ericka’s work has been instrumental in creating the necessary visibility, representation and understanding of our existence. It is not an exaggeration to say that them taking up space, and “being” boldly in their skin, has given rise to many activists and movements in online spaces. Indeed, were it not for Ericka and their partner Ebony’s unapologetic online presence, platforms like The Triple Cripples, may not have been as well understood or widely received. Ericka and Ebony are being themselves and refusing to bend or mould into preconceived ideas of gender, black love and black scholarship.

We interviewed the bold and beguiling Ericka, hoping to capture some words of wisdom, in the plush settings of The Standard hotel. Here, they unpack everything from sexuality and decolonising gender, to what it’s like to face a health crisis when you’re black:

On realising difference in childhood

“I’ve been thinking about young Ericka a lot, these days. Young Ericka was very inquisitive. Things that are not a big deal to a lot of people, were a big deal to little Ericka. Why does my hair stand up and the white girl’s does not? Why is my nose large, but theirs is not? My belly button – I used to have an outtie and I used to question even that. Like, that was racialised for me, because no one else had an outtie. I just had a lot of questions that I would ask. And I was always asking them, so that was me as a kid. Just very inquisitive.

I grew up with two acres in my backyard. I would just be in the woods for most of the day. I would just be back there with the trees and all the plants, picking berries, it was my own little imaginary world. Which was a break from living in a predominantly white neighbourhood.”

On whether homophobia is a black issue

“White people are [also] homophobic. White people [may] not talk about sex in their families. So, the thought that they do is a function of white supremacy –here they get to not talk about it, but it is also perceived that they do. It has a lot to do with black people being underneath a microscope, and it being like, ‘Oh, y’all are very homophobic’. Because a few people on maybe television, have been homophobic, that now means that black people are homophobic? No, no, no. Just because there’s a lot of white gays on TV, does not mean anything about the ‘white community’, if you will. Is there even a ‘white community’, anyway?”

On breast cancer and medical bias against communities of colour

For so long people told me when I was in my twenties, ‘You don’t need to get a mammogram just because your mum had that history –you don’t need it’. Could you imagine if I didn’t actually find a lump? There’s no gene that’s different for us. It is all about access. It is all a function of a social issue that keeps us from living, not a biological one.”

On systems of oppression and sexual expression

I was married to a white person – if I would have had that understanding, I would understand my body so much better. Through the lens of blackness, rather than through the lens of whiteness. And I think that that would free so many people. It’s not separate. It’s not a Sex Ed curriculum ‘…and then here’s the chapter about black people’. It’s [needs to be] throughout the whole thing.

There’s a great article written in Afropunk blogs, it’s called “My Gender Is Black”. It talks about how somebody [seeing] them is always going to relate to them as black [regardless of] their expression of their gender. So, I think that us talking about that and exploring what that means, as a paradigm for gender, rather than using what white folks have said is gender, would actually be decolonizing.

This interview has been edited and condensed