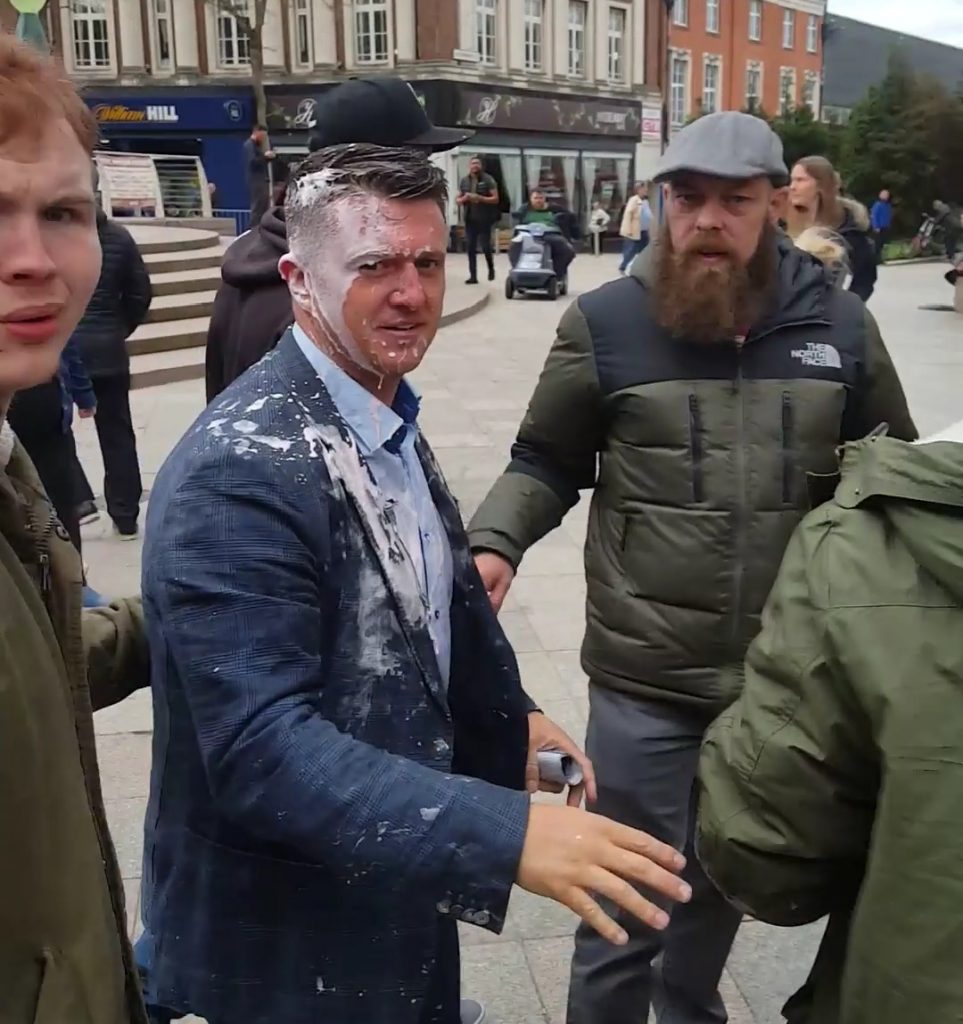 While Britain has just finished its second long weekend in less than a month, this week has been extremely tiresome. Mostly because it brimmed with historically white institutions propelling misguided, hollow, and ultimately regressive displays of diversity and race awareness into the world.

But, this week’s highlight was none-other than when 23-year-old Danyaal Mahmud threw a strawberry milkshake over Tommy Robinson in Warrington. Danyaal deserves some sort of public plaque in his honour. Tommy, who is concerningly running as an MEP candidate, responded by punching Mahmud in the head, and is calling for the arrest of the “aggressive milkshake Muslim”.

In what seems like the biggest joke of 2019 so far, the UK Home Office has been shortlisted for a race equality award. Just two days after the “fantastic” shortlist, David Lammy and 86 other MPs are calling on the Equalities and Human Rights Commission to investigate the Home Office over the Windrush scandal.

Elsewhere, in the media, the BBC has given a Tory-voting, white male comedian a place in the channel’s diversity and inclusion group. Geoff Norcott, who is a rare pro-Brexit on the panel comedy circuit, will be tasked with ensuring the broadcaster “portrays all of the UK’s communities on air, and represents them in its workforce”.

Then in education, vice-Chancellors in Universities UK (UUK) have said universities must “decolonise” the curriculum in order to help BAME students close the attainment gap with their white peers. This comes as the University of Cambridge has made the mystifying decision to appoint a white academic as head of an investigation into the institution’s historical links with slavery in an effort to “acknowledge its role during that dark phase of human history”. Bristol University plans on following in their footsteps after estimates that 85% of its original funding came from slavery. Hopefully, they’ll pick a brilliant black academic instead.

As we’ve previously covered, the British Museum is a trove of stolen treasures looted over the UK’s long colonial history.

Take the story of Gwuwagal warrior Cooman, an Indigenous Australian man shot by Captain James Cook and his men on their arrival at Botany Bay in 1770. Cook stole Cooman’s shield and it now hangs in a glass case in the British Museum. Cooman’s great-great-great grandson Rodney Kelly held an unofficial “Stolen Goods Tour” with activist drama group BP or not BP?, calling for the return of the shield to indigenous populations.

Speaking to gal-dem, Rodney said: “I always feel sad and emotional seeing it [the shield] behind the glass. The museum took me downstairs and put me in a room, and pulled the shield out of the case. That was the first time any descendant has ever held the shield.

“It feels like the shield is a trophy of one of their conquests on our shores. It’s not telling our story, it’s not showing people any history, it’s just something that they’re proud of. It’s come from Cook, they really want to portray Cook as this great person when he had no respect for my culture.”

Forty-year-old Rodney, from the Yuin Dharawal people, said the reaction from the museum is always the British Museum Act of 1963 which was brought in by parliament to prohibit the museum from returning any of its artefacts. The law serves to protect Britain’s colonialist history, and erases the voices of those stolen from, and is still in place now.

“So many people back home, every time I’m here they ask me “are you bringing them back? When are they coming back?”. It’s so frustrating to have to say to them “no, not this time,” Rodney explained.

It’s shocking to know that there is a piece of legislation protecting the UK from returning important, stolen, cultural relics to their homes.

What is the race card, where do I buy it, and does it have as many benefits as Monzo? Almost every PoC has a story of when they’ve been accused of having this card in their arsenal. As a 13-year-old at my predominantly white school, I was accused by my friends of playing the “race card” when I plucked up the courage to speak about a white teacher repeatedly treating me unfavourably. When a white person reduces your life-long struggle with racial oppression down to a single card that you’re “playing” for the upper hand in a conflict it’s a truly devious form of gaslighting.

Paula Radcliffe, a British athlete, who has taken it upon herself to tell women of colour what “genuine” racism is, and to stop playing the racism card. For context, Radcliffe was taking issue with Novara Media’s Ash Sarkar (and later gal-dem’s Charlie Brinkhurst-Cuff) about Caster Semenya being humiliated and pushed out her career as an athlete due to her increased natural levels of testosterone due to having hyperandrogenism.

Accusing a person of colour of playing the race card has always been the ultimate dismissal of their voice and perspective. It’s a silencing weapon utilised by many white people every time a person of colour speaks out about the more subtle andsinister forms of racism they encounter.

Caster’s case has been a clear display of racism and misogynoir, complete with white women crying and the literal erasure of black athletes when a polish runner Joanna Jóźwik came fifth but felt like she got silver because she was the “second white”. The experience of marginalised groups is not a game. The race card doesn’t exist – it is a figment of white fragility. What is very real though is the whiteness card, played brilliantly and effectively here by the likes of Paula and crybaby Lindsay Sharp.

• We are heartbroken to hear that inspirational indie media company Media Diversified is closing. They were influential in fighting the white noise of the media. Founder Sam Asamadu said: “Grants are few and far between, especially when there’s not a single white face on your team.”

• Rich Kenyan influencer Achieng Agutu may have duped the Ellen Degeneres Show into giving her $50,000 after claiming she learned English from the show, and was struggling to pay for tuition fees in the US because she came from a poor background. Kenyan media has been exposing the young woman’s lavish life and prestigious education.

• Regina King has secured a huge deal with Netflix, who will be producing films and series beside her sister Reina as head of production.

Queen Latifah has confirmed that the original cast of Girls Trip are all up for a sequel and are waiting on the script.

• Halima Aden, a Somali-American model, has become the first Muslim model to appear in Sports Illustrated wearing a hijab and burkini.

• Jaden Smith is set to play Kanye West in a new alternate reality TV Series called Omniverse that is using Yeezy as a vehicle to explore Ego.

• Ice Cube, Dr. Dre, Will Smith, and Serena Williams have assembled to bid $10 billion to buy 21 TV stations, but they are allegedly being blocked by white TV businessmen of the old boys club. Instead the Disney sports networks have been bought by right-wing media group Sinclair broadcasting.

• China’s most recent human rights violation against Uighurs and other Muslims in the country is a vast surveillance network through an app. A report by Human Rights Watch analysed the app used to collect personal data from ethnic minorities in Xinjiang – where about a million Muslims are being held in political re-education camps.

It has to be milkshake gate. Just over a month ago it was reported that anti-Muslim hate crimes in the UK increased by 593%. A milkshake to the face is less malevolent than the racial hatred Tommy stokes for a living.

“I was the only Asian guy there. I said to him I do not wish to speak to you. I just got annoyed with him. A milkshake slipped out of my hand” ? pic.twitter.com/a2xN77HviO