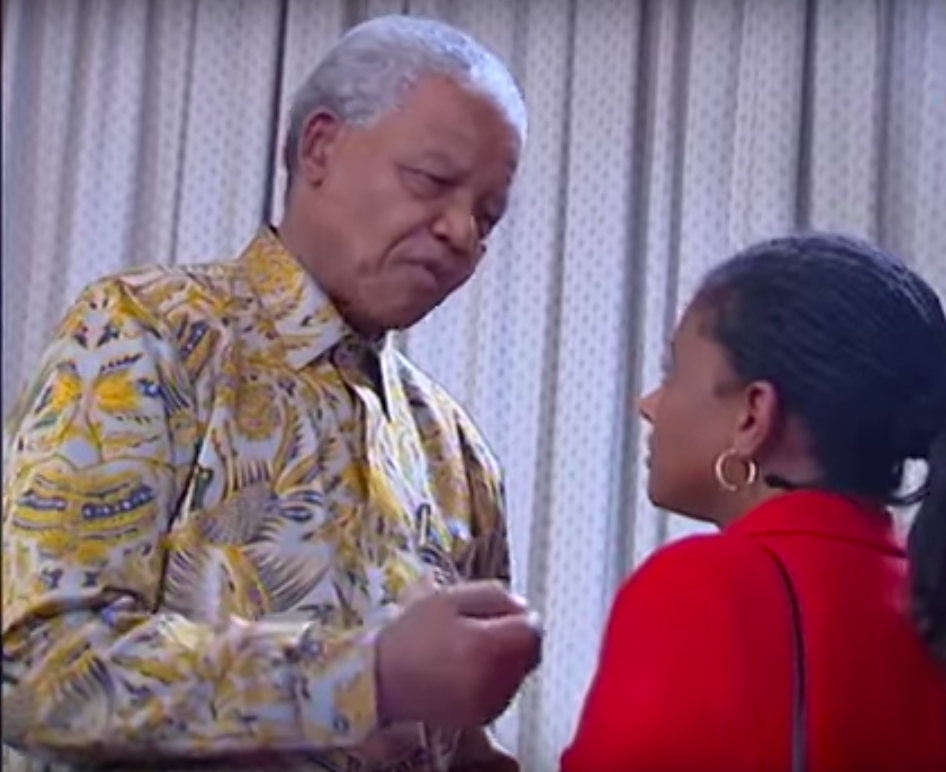 I was born a few months after Stephen Lawrence’s murder. I came of age in the “post-apartheid” era, with Nelson Mandela as the archetypal figure of morality, and Stephen Lawrence’s murder as the ultimate injustice. I knew, like most people, that Mandela had met the Lawrence family shortly after Stephen’s murder in May 1993, and was aware of the speculation around the impact of his visit on the case. However, when I met Baroness Doreen Lawrence to speak about Mandela and the centenary of his birth in 2018, on a sunny afternoon in her office in Westminster, I was unprepared for just how profound an impact Mandela had had on her life.

Growing up first generation Ugandan-British, books about Mandela lined the walls of my dad’s office, and Doreen Lawrence’s battle for justice was ever-present on our television screen. Their parallel struggles came to be the lens through which I, and many of my peers, understood race, power, dignity, and justice.

Nelson Mandela met the Lawrence family on 6 May 1993 in South London, two weeks after the murder of Doreen and Neville’s son, Stephen Lawrence, a hate crime which triggered one of the most controversial and long-running murder cases in British history. The day after the meeting, five suspects were arrested.

“Stephen, as far as they were concerned was just another black boy so meeting Mandela was where the headlines came from”

Doreen Lawrence is adamant that meeting Mandela, an international figurehead, was the trigger for the police’s actions.  “Without that speech, and without us meeting him, the arrests would never have been made”, Lawrence tells me early on in our meeting. “The government of the day wasn’t interested. Stephen, as far as they were concerned was just another black boy so meeting [Mandela] was where the headlines came from”.

Doreen recalls the immediate aftermath of Stephen’s death as a whirlwind. “There were so many things happening,” she tells me. “We were trying to give the police as much information as we could […]But we were being treated as if we were criminals ourselves, and the ones who murdered Stephen were being protected by the police.”

When asked about first impressions of Mandela, Baroness Lawrence describes meeting a gentle “giant of a man” who towered over her before they sat and began the conversation about Stephen. There is a tenderness in her voice as she remembers the way he spoke, “constantly on your level”, and in the years since she has sought to say thank you in a number of ways.

“Like Mandela, Lawrence sees education as a means to challenge structural disadvantage”

South Africa is one location where the Stephen Lawrence Charitable Trust set up bursaries for students from disadvantaged backgrounds to attend university. Like Mandela, Lawrence sees education as a means to challenge structural disadvantage. Although regrettably, the Trust has now had to suspend its programme in South Africa due to lack of funding, the connection has been maintained and they hope to reinstate the scheme in the future.

In 2003 Lawrence had the chance to say thank you in person when the former South African President unveiled a blue plaque in Camden for anti-apartheid activists, Ruth First and Joe Slovo. She describes meeting Mandela in the community centre after the ceremony as a “treasured moment”. Alone with him by chance, she was able to share a few words of gratitude for his speech following Stephen’s death before crowds descended and security began to move in around them.

We move on from talking about the man himself to the parallels between Mandela’s battle against a racist and oppressive regime and the Lawrence’s struggle for justice in the face of systemic racism. It is not a comparison Doreen makes herself but when I ask whether she feels Stephen’s legacy has transcended his death, much as Mandela has come to represent far more than the man himself, she agrees, acknowledging that of all the young people murdered over the years Stephen’s name is perhaps the most recognisable to youth today.

“Stephen’s name has done so much for this country, he’s changed laws, had an inquiry. He’s brought out into the open institutional racism; not just within the police but within [other] institutions itself – universities, colleges, workplaces.” It is for this reason that the recent announcement on the 25th anniversary of Stephen’s murder, of Stephen Lawrence Day (which will be marked annually on 22 April), was of such great significance.

Yet, despite this victory,  just as Mandela’s rainbow nation has come under question from the post-apartheid generation, like many people of colour, I’m disillusioned by claims that the UK is moving towards race equality. Lawrence, a vocal critic of the authorities’ handling of the Windrush scandal and Grenfell, is similarly realistic about how far there is to go in addressing racism in the UK. “Institutional racism is still alive and kicking. And, until we accept and see it for what it is, and keep working on it [it won’t].”

Nonetheless, Doreen remains future focussed; it is this quality she admired so greatly in Mandela and his comrades, who despite appalling treatment whilst imprisoned came out to work, not for themselves but the whole of South Africa. “You know you find very few leaders that don’t put themselves first”, she comments.  I sense a hint of irony in her voice given the timing of the interview just days after a wave of resignations in the British government.

As we close the interview, it is clear that Doreen Lawrence’s admiration for Nelson Mandela extends far beyond gratitude for his involvement in Stephen’s case, or the general respect he has come to garner as a moral and political figure. Her appreciation is palpable; there is admiration for him as a freedom fighter, a leader, a politician, and as a person. Having worked on South Africa in several roles now, I had come to expect this kind of respect for Madiba. Yet it still never ceases to amaze me, how much individuals with such highly commendable achievements of their own hold Mandela in such reverence.

Baroness Lawrence closes: “He doesn’t just ask for respect, he gained that respect.” I can’t help but feel that if Mandela were here, he may say a similar thing about her.