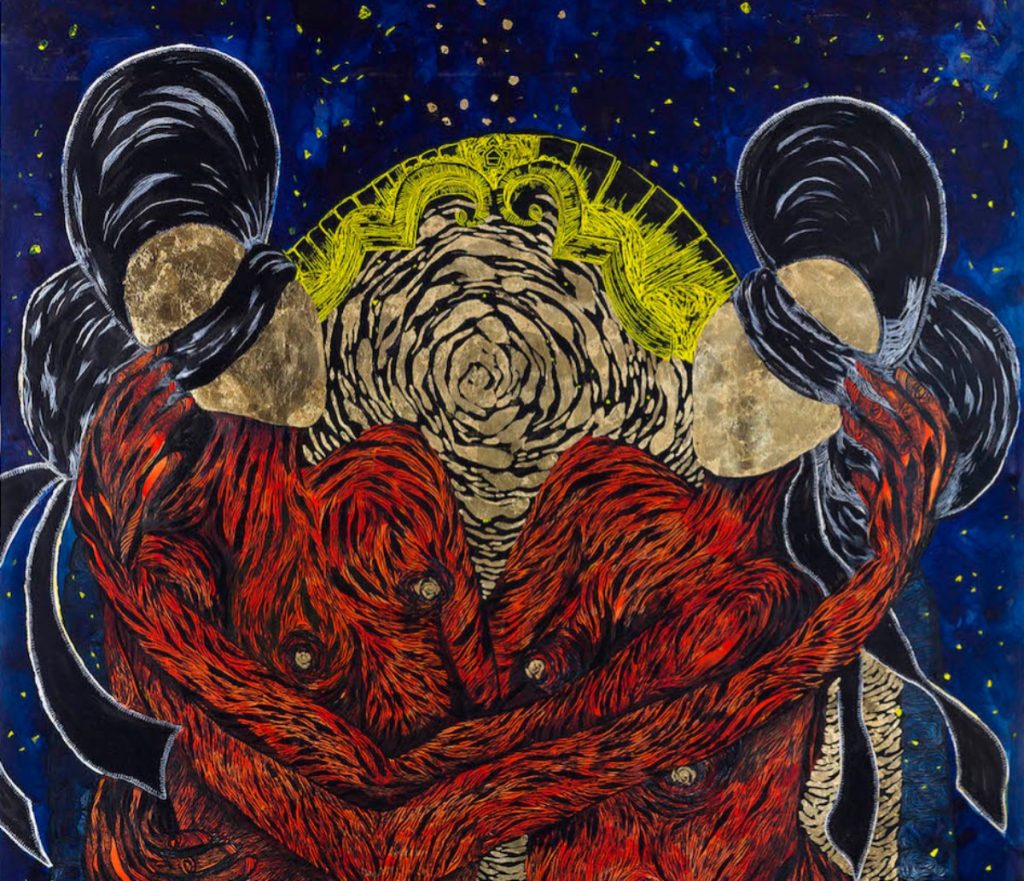 It sure has been one hot girl summer. But already the sun is already starting to creep back under the clouds and the leaves are beginning to fall. As we wind down to the final days of the season we’re looking to raise our brows slightly higher as our great prophet Megan Thee Stallion told us to get ready to transition towards hot nerd fall.

So hello September, what do you have in store for us? From London down to St. Ives, Birmingham over to Sheffield, this month promises to enlighten, entertain, and challenge your worldview with a varied cultural offering. From film to ballet, tapestries to paintings we’ve compiled a mix of free and paid events to ease you into autumn.

London: BL CK B X: Rabz Lansiquot ‘Where Did We Land’

Rabz Lansiquot is a leading member of the arts collective sorryyoufeeluncomfortable, whose audio-visual work is informed by black libertary thought and black queer studies. Where did we land is an ongoing experiment that probes into the impact that images of anti-black violence have, especially as they’re constantly produced and reproduced in film and media. The free event centres around the problems of making a spectacle out of black pain. Incorporating screenings, study days and talks, this exhibition is a space to trail and test ideas for an upcoming Black Film Anti-school format.

In collaboration with Women in Film, Burnt Roti (one of our favourite magazines) is screening a classic romantic drama from the 90s. Starring Denzel Washington (Demetrius) and Sarita Choudhury (Mina) the original tagline included “Passion. Tradition. Mix it up.” as the tale follows an interracial romance that uncovers the tensions between Indians and African Americans. Both Mina’s father and Demetrius must learn to “bury their pasts and their prejudices”. The screening will be followed with a panel with Sharan Dhaliwal, Bilal Harry Khan and Taylor-Dior Rumble.

Who doesn’t love free poetry? Suhaiymah Manzoor-Khan is launching her debut poetry collection this month in which she muses on the her rage and devastation against the world we live in. The book is described as “a disruption of comfort, a call to action, a redistribution of knowledge and an outpouring of dissent” and to celebrate the release she’s hosting a riotous event at Free Word. There will be performances from Suhaiymah and a curated mix of local poets and visitors can also hear from grassroots organisations doing bits around the UK.

Cornwall: Otobong Nkanga – From Where I Stand

From Where I Stand is the debut UK show of the Nigerian artist Otobong Nkanga. Using tapestry, drawing, photography, installation video and performances, Nkanga digs deep into the complex and fraught colonial histories of land acquisition and ownership. Creating landscaped pieces like the large scale woven photographic textile, The Weight of the Scars (2015), she explores the heritage of scarred, fractured lands and the ongoing process of post-colonial reconstruction. Alongside this piece will also be new site-specific pieces and performances. The show is set to be a formidable exploration of the abuse of land and the way land is used by a modern Nigerian economy lacquered by a booming oil industry.

History repeats itself and Imran Perretta zones in on this with his film and solo exhibit. He juxtaposes his experiences as a young man of Bangladeshi heritage in London with Graham Greene’s 1954 short story The Destructors, which follows a gang of youths who plot to tear down an old man’s house. In doing so Perretta draws parallels with Greene’s era of desolation and austerity, and the boys perceived capacity for destruction in a postwar era of disaffection with contemporary issues. Using a split screen format, Perretta lays bear how renewed austerity measures, and the post 9/11 state sponsored Islamophobia impacts the realities of British Muslim men.

One of the most beguiling moments of Stormzy’s iconic Glastonbury headline this summer was the powerful ballet performance as the screen behind told viewers how Ballet Black had created the UK’s first pointe shoes for dark skin tones, all in the name of diversifying the view of what a ballerina looks like. Now, the professional ballet company made up of international dancers of black and Asian descent are pirouetting into acollaboration with the Birmingham Royal Ballet. Highlights of this triple bill include a re-staging of the critically acclaimed ballet The Suit, and a dazzling tribute to Old Blue Eyes, in Twyla Tharp’s dazzling Nine Sinatra Songs. The best thing is that admission starts from just £9.

This mixed bill will be on 19 September – 30 October, visit the Birmingham Hippodrome for more information.

East Side Projects Gallery, have pulled it out with two stellar solo exhibitions. Artist and illustrator, Sofia Niazi’s show will explore the visual culture and production of the housing market. Through a series of drawings Niazi creates a fictional new housing estate called ‘Derby’. The setup of this fantastical world is what homeowning could be like, if it was brought into a more attainable spaces, and what methods are used to create our desire to purchase.

Up next Lady Skollie, a South African visual artist and painter reimagines the history of “so-called coloured descent” through her bright, zesty paintings of a utopia free of hate and filled with self-love. Marking Skollie’s first solo exhibition in Europe, the show will feature large scale paintings and performances, that will expand on her recent Papsak Propaganda series of works around the Dop system – the official system of paying coloured farm workers in alcohol.

Spaces to probe the potentials of new futures have always been crafted in the spheres of speculative and science fiction. This is also an area where women, trans and queer perspecitves are overlooked. So bringing together artists Sophia Al Maria, Sonya Dyer, Ursula Mayer and Victoria Sin this exhibition calls on multiple feminist perspectives to critique current systems of partriarchal power. From film to writing, painting and performances, the show will seek to create new insights and angles on gender, power, ecology and community. Hopefully it brings us one step closer to finding novel solutions to our present throes of turmoil.

Rainbow Noir is a volunteer led community celebrating, and connecting the LGBTQI people of colour based in the Manchester area. The Here exhibition is an assembly of portraits shot by Tom Quaye, of some of the members that currently make up the Rainbow Noir Family. The core message of the work is to underline the ethos of the Rainbow Noir group and celebrate the adversity of queerness: “We are black. We are brown. We are Queer. We are here. We have always been here and we will always be here”.

Manchester Home is hosting this event now until 14 October

Founded in 1988 by a group of community-minded Chinese women, the Wai Yin Society is one of the largest BME community centres in the UK. The community group have created a series of tablets with the artist Julie Mosely, which reclaim their own narratives and depict their stories of migration, hope, loss and joy. The tablets form part of an ongoing oral history project, which captures the first hand accounts of people whose lives are linked to the recent history of China and Britain. Pop down to Crossing the Borders, an insightful interconnected exploration of human storiesvia Britain, China, Hong Kong, Vietnam, Macau and Malaysia.

Manchester Art Gallery is hosting the event until 27 October