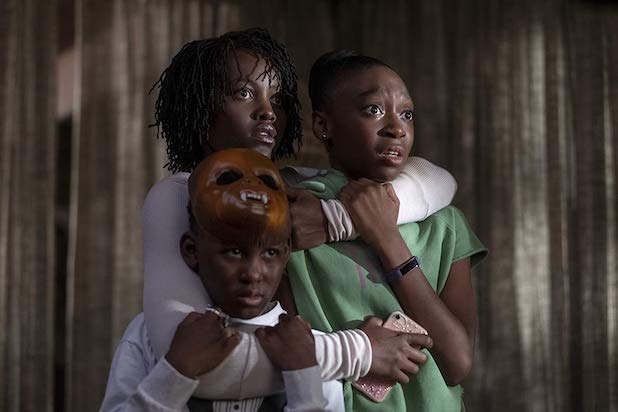 via Universal Pictures / Us

It was only last year that Jordan Peele won an Oscar for the redefining horror story that was Get Out. He returns from his success with another sensational film, Us, a multi-layered and surrealist film which is very different from his debut. Us is murkier, far less black-and-white, and plays on many different fears. One thing is for certain: Peele is helping to reshape the genre once more.

The trailer was launched on Christmas morning, and has caused much speculation of how this film will follow Get Out. Due to Peele’s debut having a huge commentary on the social issues surrounding race, it was not irrational to think Us might also do the same. When watching the trailer, I had a shocking realisation that despite it being 2019, I had never seen a black family in a horror film before. Simply by having a predominantly black cast, Peele has reshaped what we as an audience are used to seeing. Not only this, but their race is not a subject within the movie. It was genuinely refreshing to see a film led by black actors and featuring black musicians without having to make race or racism a driving force behind the story.

Us follows the Wilsons, a middle-class American family: Adelaide (Lupita Nyong’o), her husband Gabe (Winston Duke), daughter Zora (Shahadi Wright Joseph) and son Jason (Evan Alex) as they go for a beach holiday, despite Adelaide’s reluctance. After a series of unsettling consequences leads to the family coming face to face with their disturbing doppelgangers and the horrific events that follow. Peele makes people uncomfortable, not just scared. He challenges their senses and the musical score, like Get Out, builds the suspense and sinister atmosphere of the film.

The acting of the cast is spectacular as they manage the challenge of playing two very different characters each. This Nyong’o’s biggest role yet, as she takes up the space of the main protagonist, her performance and the musical score holds the unconventional final act of the film together. It was refreshing to see Lupita play a character who was not racially oppressed or defined by her warrior-like seriousness. Us brings her to life and shows her skill as she takes charge. In an interview Nyong’o said: “there’s been an expectation that [Peele’s] films would continue to investigate the paradigm…The remarkable thing is having a black family at the centre of a film in the horror genre but as far as the story goes their blackness is not in question.”

Last month, the documentary Horror Noire: A History of Black Horror was released, and it is an eye-opening reflection on the evolution of blackness within the genre. Jordan Peele, William Crain, Keith David and more were interviewed and relay their thoughts on black representation throughout the history of horror. In the beginning, there were not even black actors, the characters would be played by people in blackface – then there was the atomic age, where black characters disappeared altogether and were replaced by monsters and aliens. This was followed by the Blaxploitation era which people took in very different ways, and then came the well-known trope of “the sacrificial negro” aka the first to die in a movie, often saving the white protagonist in the process. In Us, the white people are the first to die and when they do, it is easy.

Horror is a genre that often holds up a mirror to the fears of society and therefore grows with the zeitgeist and evolves faster than other genres. A common fear presented is that of the “other”. In an interview Peele said: “We all have our own personal ‘us’ versus ‘them’…in its core, this movie is about the fact that ‘them’ is our enemy. As people we blame the other…and perhaps the true enemy, the true villain, is us.” And that is true, there is something very disturbing about our own inner demons and not being able to outrun them internally or externally.

Both Nyong’o and Duke starred in the predominantly black cast of Black Panther – it is great to see actors and directors getting deserved recognition for their craft and I for one, am excited to see what is around the corner. Nonetheless, there is still a long way to go.

Get Out was made during the shift of Obama and Trump-era America. The ending was meant to be a lot bleaker, but due to the rise of the Black Lives Matter Movement, Peele changed this to something lighter. Get Out was a film that was needed for the time, it was a film that cracked open the gate and now Tales from the Hood 2 is being released. Peele wrote Get Out for a black audience: white people could empathise with the characters but the fear of racism would not truly resonate with them. Us portrays a horrific nightmare that can relate to a universal audience. It seems that horror is evolving, and I hope that the other genres will be quick to follow. There are so many untold stories that are just waiting to be seen and felt.