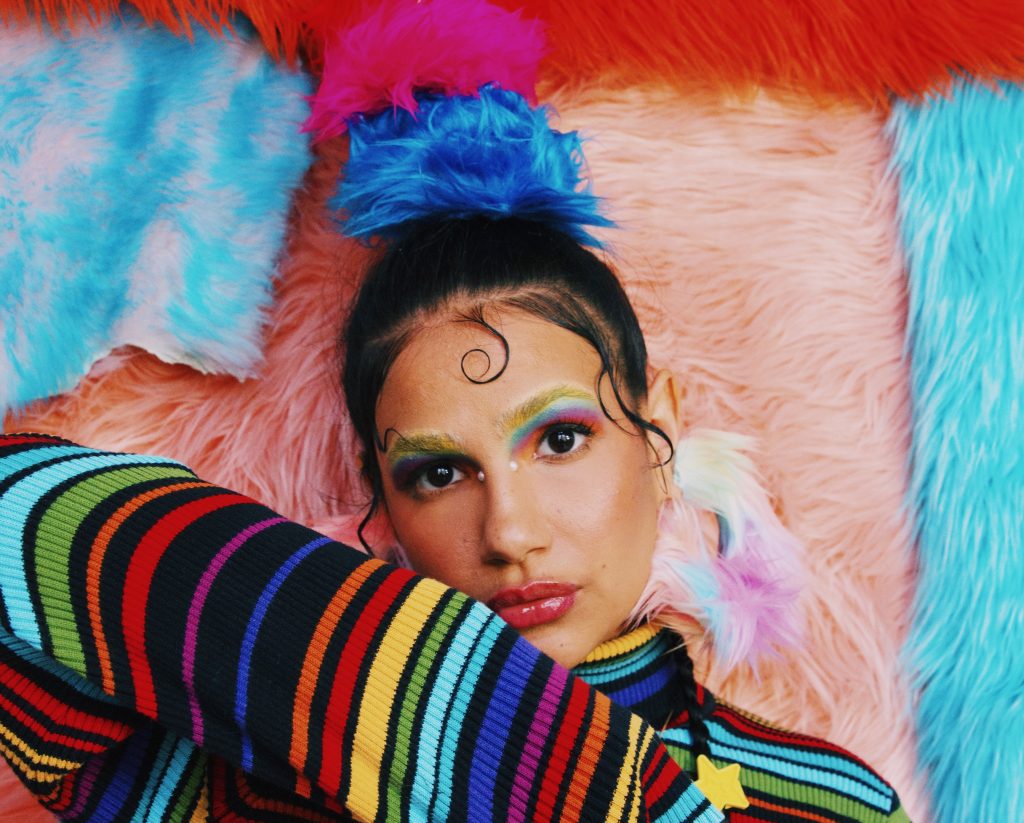 Dominican-American artist Uzumaki Cepeda has made a name for herself on the New York art circuit due to her faux fur installations. From rooms covered in plush pink fur containing men lifting weights to a blue-electric fur swimming pool, Uzumaki transforms complex topics like masculinity, racism, and immigration into soft, immersive pieces viewers are welcome to touch. Bold and playful, Uzumaki’s work has captured the attention of social media stars and mega-corporations alike, leading her to amass a following of over 117k Instagram followers and commissions from A$AP Rocky for Complex-Con, Refinery 29 for 29 Rooms, Instagram and Google Pixel, Ugg for campaigns and more.

Now, she’s taking cues from these outlandish creations for a new line of clothing named the Uzumaki Couture Collection. With a lookbook that includes LA’s most innovative creators (Jay Versace and Tanrelle, to name a few) the line marks the beginning of a new chapter for the Bronx-native – the culmination of years spent fine-tuning her craft, finding success as a model and scoring deals with apparel giants like Nike, all while fighting to make black and brown people feel safer in the world. “When people wear my clothes I want them to feel like they’re that bitch!” she says over the phone from LA.

Uzumaki’s most electric pieces are reimagined as fuzzy bikini sets, bags, shorts and hats that are equal parts teen dream and female empowerment. Her signature spiral logo (Uzumaki means spiral in Japanese, a moniker she adopted from an anime called Naruto) appears on sweat separates in a dizzying pattern. The only non-fur items, the logo-donning sweats nod to the designer’s love of streetwear unflinching self-confidence.

Don’t be fooled by the range’s otherworldly feel. It’s rooted in the artist’s earliest encounters with reality, including her father’s deportation and constant moving and instability. The punchy colours reference the vibrancy of her childhood neighbourhood – bright nails, pink roller sets, and flashy jewellery. The textures aim to provide comfort to bodies who are rarely afforded any in politically tumultuous America.

gal-dem sat down with Uzumaki to discuss her line, love and her new life in LA

gal-dem: What led you to create the Uzumaki Couture Collection?

Uzumaki Cepeda: My daydreams. I always wanted to make wearable art but it had to be cool, out of this world and iconic. I’m inspired by Alexander McQueen and his spontaneity, and my favourite anime characters.

Are your clothes for everyone?

Not everyone is going to wear my shit. These are real-life Polly Pocket clothes, this is the stuff you’d put on a Bratz doll.

Why was it important to include couture in the name?

From the way I thought about the bra being tied to the fuzzy hearts on your fucking boobs – it’s all so whimsical. You could wear it as cosplay if you really want to just use it in a crazy edgy fashion way. I take pride in being different and everything is handcrafted. So, yeah, couture.

There’s a big debate in the US about the validity of safe spaces and experiences for people of colour. How do you respond to that?

I say fuck them. Especially the ones in the art world, I’m surrounded by white gatekeepers so I try to create things that champion accessibility and diversity. I’m not a pessimist, that just what it is.

When is the last time you felt unsafe in the world?

Shit, yesterday walking down the block. In downtown LA there is such a big gap between the people doing well and the people living below the poverty line. It’s a reflection of our country’s system of corruption. Tell me, how do you have people paying $2,000 for lofts and someone outside throwing human shit at people?

You’re somewhat new to LA, how do the cities compare in your opinion?

I’d pick New York. There’s more diversity in everything and it really is a melting pot with everybody packed into a tight box.  I feel like that chaos it what breeds its beauty.

You got your big break in 2016, a tumultuous year for the country. Do you feel like the demands of artists changed after the 2016 election?

This is a time when a lot of things are coming to light that we already knew. But, it’s also a time to practice your truth and stand in what you believe in because we are being met with a hateful agenda.

“Not everyone is going to wear my shit. These are real-life Polly Pocket clothes, this is the stuff you’d put on a Bratz doll”

Another big debate is over immigration. How has America’s immigration policies affected your family?

My life was changed forever when my dad got deported. I’m never going to be able to be in the same country as my father – that tore my family apart. After all of these years, it’s something we’re still trying to work through.

How has that agenda played out in your everyday life?

I hate to use this word, but what they’re calling like the border crisis or the situation at the border right now is just history repeating itself. I don’t see any difference between the conditions people there are being held in and the concentration camps – white imperialism at its best. It’s time for us black and brown people and our white allies to team up and stand tall.

How does the line compliment your activism?

It’s reflected in the materials I use. Everything is designed to feel nice when it rubs against your skin. The sweatsuit is extra soft with custom printed fabric, the bra has polyester lining – all part of my efforts to make black and brown people feel safe through my work.