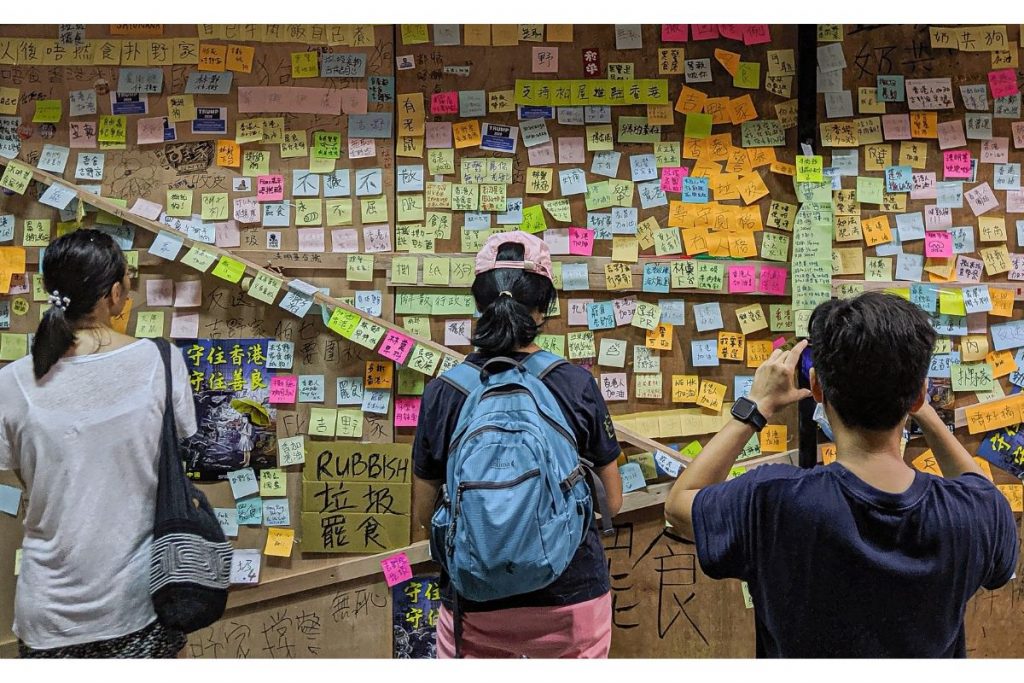 TW: This article contains mentions of suicide and violence

With the Hong Kong protests entering their 13th week, the harrowing reports of police violence are ever present in the minds of protestors and supporters alike. However, amid this unprecedented political turmoil, creative calls for democracy through art have captured some of the most defining moments of the movement. Despite the common practice of self-censorship due to fears of persecution by the government, a number of outspoken Chinese artists have risen up in Hong Kong’s art scene, making work which contributes to the growing resistance.

The Extradition Bill is proposed

The initial protests in Hong Kong were catalysed by the proposal of the Extradition Bill by Hong Kong Chief Executive Carrie Lam on 3 April. The bill would enable the extradition of critics of China, such as artists, journalists and NGO workers to mainland China for trial in the country’s controversial legal system, a prospect feared by many.

Outraged critics took to the streets in their masses to express their worries. Turnout for the protest on 1 July was estimated at 2 million people, according to its organisers – almost a third of Hong Kong’s population.

Badiucao, an artist-provocateur and long-standing critic of the Chinese government, spoke to gal-dem about the important role art has played in spreading awareness of the resistance movement. Born in mainland China, he fled to Australia in 2009 due to persecution. A recent break-in at his home – not a “random coincidence”, he tells me – reminds him that he is still in danger. “[Art] has the magic to engage with its audience, both emotionally and rationally,” he tells me. “Hong Kong has its own distinctive language and culture which is beautiful […] sometimes this could possibly be a barrier for people outside to understand it. So a visual language like art can be used to overcome this and can activate emotion and empathy”.

Despite the serious tone of the protests, Badiucao’s satirical work uses an additional source of inspiration. He explains the important use of humour, remarking “I guess political satire can work as a sort of comfort, where they can find a little bit of joy within all the pain”. Badiucao is encouraged by Hong Kongers, who tell him: “your image [made] my day, because I haven’t smiled for a long time, […]  thanks for creating interesting images that support Hong Kong but are also kind of funny”.

As protests continued, deeper questions surrounding Hong Kongers’ democratic rights and the Chinese government’s interventions emerged. Beijing-backed executive Carrie Lam’s initial response to the protests sparked further outrage as she re-asserted her position, asserting that Hong Kong was “duty-bound” to introduce the bill. After appearing teary at a press conference, protestors took to social media, dismissing her response as insincere and a complete facade.

Bowing to international pressure, Lam announced the suspension of the bill on 18 July. However, critics remain sceptical as the bill has not formally been withdrawn and Lam refuses to resign.

First recorded fatality of a protestor

With little movement from the government, demonstrators resorted to ever more daring lengths to express their desperation. On 15 June, Marco Leung, a 35-year-old protester, fell from 20-meter-high scaffolding whilst standing next to anti-extradition banners in Pacific Place, a shopping centre in the Central and Western district. This marked the first recorded fatality of the movement; the police treated it as a suicide. He was nicknamed “raincoat man” for the jacket he wore and was hailed a martyr of the movement by protestors.

Badicao tells me: “I was pretty shocked when I heard [about the death]. I got up and did the drawing immediately, because I knew I couldn’t sleep anymore. I had to honour him but also know we lost a life. Nothing is more horrible and heavy than that”.

News reports have continuously revealed the extreme use of force by Hong Kong police against protestors and bystanders. The use of UK-manufactured tear gas, rubber bullets and water cannons are among a few methods deployed to subdue crowds. Over 1,800 rounds of tear gas have been used by police, which experts in crowd dispersal methods have called “indiscriminate” at times.

On 11 August, a young female medic, was shot in the eye by police during the protests in Tsim Sha Tsui in Kowloon. A statement released by the alleged victim’s sister claimed that she had received emergency surgery after the bones around her eye socket were shattered by a suspected beanbag projectile, and faced potential permanent blindness. Despite numerous cases of blatant violence, an investigation into police misconduct is yet to be launched.

The shutdown of Hong Kong International Airport began on 12 August, when protestors jammed the terminal and forced the cancellation of multiple flights. Hong Kong-based airline Cathay Pacific fired staff including two pilots for their involvement in the protests, whilst its CEO Rupert Hogg resigned under pressure. The airline faced increased strain after China’s state-run press fuelled an online attack using #BoycottCathayPacific. The airport reopened on 14 August after riot police entered with pepper spray to clear protestors.

As the world watches Hong Kong, we asked Badiucao what people outside of Hong Kong can do to help. “I do think Western countries are responsible for what’s happening in Hong Kong now,” he replied. “The UK is especially obligated to help. Hong Kongers are waving the UK flag, that’s how they feel! Without a proper push from international society, Beijing could do whatever they want. I would say that to restrain China’s power is necessary, including economic sanctions which are important.” Considering the state violence already enforced on protestors, it is clear that international powers must now act quickly to defend freedom and justice for Hong Kongers.