Warwick student a victim of racism in halls of residence 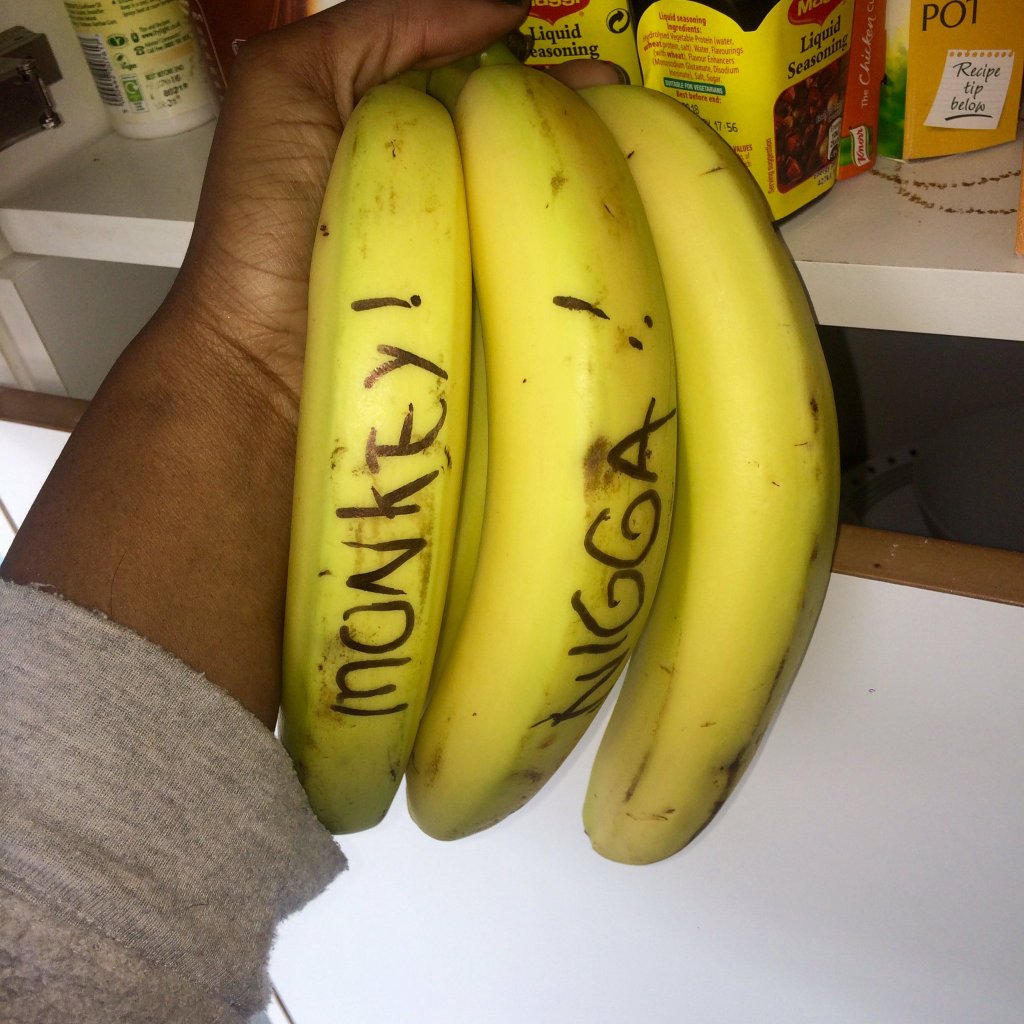 A student found racial slurs graffitied on bananas in her halls of residence yesterday, at the University of Warwick.

Faramade Ifaturoti, a first-year Biomedical Science student and black woman at Warwick, walked into her kitchen yesterday morning to find her bananas with racial slurs written on them in marker. She posted a tweet with a picture (below), stating: “Just entered the kitchen and look at what one of my flatmates has done. I am extremely disgusted.” 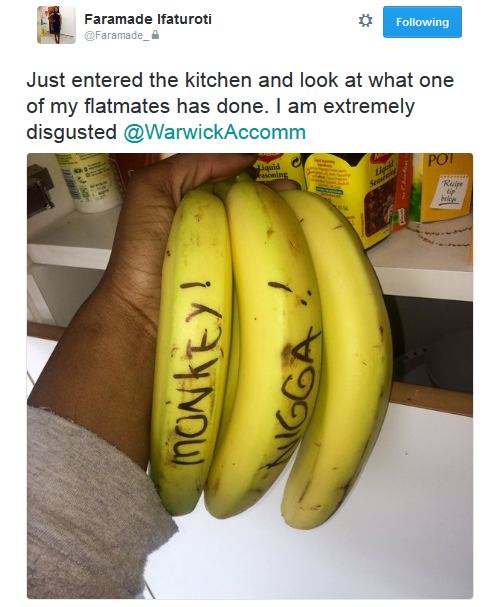 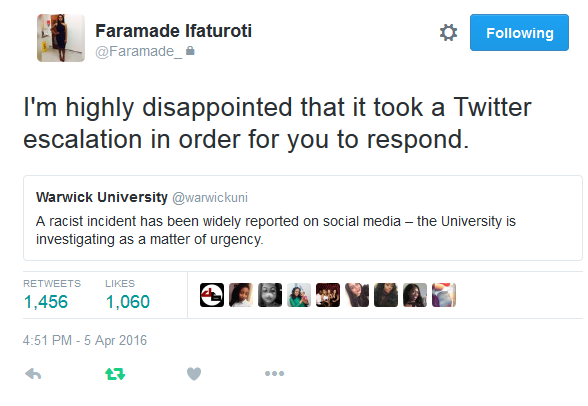 When asked to confirm when the university was made aware of this incident, spokesperson, Peter Dunn, ignored the question. Instead, he repeated what he had already told Warwick University’s student newspaper, the Boar: “We are aware that a racist incident has been widely reported on social media. The University is investigating this as a matter of urgency and began to do so the moment it became aware of it.”

According to Buzzfeed, however, they were only alerted to the incident through Twitter.

At the time of writing, Faramade has been offered alternative accommodation but it is not clear whether she has been relocated. Warwick Anti-Racism Society’s (WARSoc) current co-president, Mems Ayinla, explained that “they are asking her to pay more for her to be moved.” Should she wish to ensure protection and her safety against further incidents, it appears she will have to pay for it.

gal-dem are waiting for further comment from Faramade on this incident.

Much of the response from Warwick students has been supportive, with WARSoc and the SU, in particular, releasing statements as well as the Boar’s call for testimonies of racist incidents.

WARSoc’s initial statement read: “So disgusted to see in our very own university halls such rampant and abusive racism.”

They added: “We deserve zero tolerance to racism on our campus. THIS IS NOT AN ISOLATED INCIDENT.” The last part was repeated by many gal-dem spoke to about the incident.

However, many others saw fit to question the authenticity of her claim, including those reporting referring to it as a “racist” incident, in quotation marks, displaying further racism. WARSoc were also forced to defend Faramade against ignorant comments on their Facebook page yesterday. Instead of showing compassion for her, the victim, they saw fit to question her, enacting further violence. From the images, there is no question that the slurs were racist.

Indeed, much of the media response has focused on clearing the university’s name and testifying to a “quick” response, rather than Faramade and the context of further instances of racism on campus. BBC News even misgendered Fara in their reporting, exposing their lack of regard for her.

While such an overt display of racism came as a shock, this is not the first incident of its kind. In 2014, “Warwick Best Snapchat”, a Facebook page, was shut down after posting a picture captioned with a racial slur. But less overt incidents have continued to occur.

“This disgusting act of racial abuse was ultimately meant to humiliate and denigrate a black student. As much as what the person/persons did was disgusting, we have to be careful in not isolating this incident to something that has occurred in a vacuum.” First-year Law student Ivié Itoje told gal-dem, reinforcing that Faramade’s horrifying story is just one of many.

“Many students have received outright racism from flatmates, however, Fara was brave enough to put her story out there and garner attention to the matter at hand.” Ivié finished with a demand for universities to implement a proper system to deal with racism on campus, adding that she believed the student responsible “should face expulsion” as part of the university’s stand against this behaviour.

Jessica Agboola, co-director of The Black Women’s Project (BWP), explained: “I, for one am not surprised that this has happened but I am very, very concerned for her safety and wellbeing in the halls.

“I have heard from so many of my Little [Sisters], involved in The BWP mentorship programme, about a whole host of racist incidents they’ve experienced at Warwick.  It is unacceptable that after working so hard to get into university, let alone a top 10 university, that they have to deal with such attacks on top of their studies. These incidents prove more and more why The Black Women’s Project needs to exist in Higher Education institutions, to defend and support our girls.

“It also indicates on an institutional level that there is still a lot of work to be done in terms of the universities following through with [their] ‘core values’ that promise to protect all students.” Jessica also commented that “my team and I will never stop working and fighting for Black women on campus but ultimately, we shouldn’t have to fight for what should be our right.”

“It is a massive shame that the institutions that promise to protect us are failing to fulfil those promises and these incidents are directly affecting our chances and our rights to be educated – as Fara would have been revising for her exams if this incident had not happened today.

“We will always aim to ensure that our girls’ value is protected and we look to produce a long-lasting change for all of our Black girls and ethnic minorities in higher education.”

Though Jessica pointed out that work needs to be done at universities to protect all students, it became clear yesterday that this would only happen after details of the incident were spread across social media. WARSoc’s Mems Ayinla explained, in a statement to gal-dem, that such work came from liberation societies:

“It is unfair that many students in liberation societies are being forced to put their degree on the back burner to deal with issues such as this. The university does not have useful procedures in place to protect students of colour, hence the reason why projects such as Warwick Anti-Racism Society, Black Women’s Project and Let’s Talk Black were created.

“It is not our job to deal with the mess created by bigoted students, nor is it our job to be continually pacified by this university. There are more black men in prisons than in Russell group Universities. Students of colour are still less likely to get a grad job compared to their white counterparts. If the university is so committed to dismantling racism why are these issues not prioritised?

“We want a liberated curriculum, better representation and a zero tolerance policy when it comes to discrimination. After the events of today, we implore you to sign our petition in solidarity.”

This petition demands that the university review their policies on racism and discrimination, impose a zero-tolerance policy for racism, ensure a liberated curriculum and equal representation. You do not have to be a University of Warwick student to sign it.

When asked for comment, Isaac Leigh, president of the SU, emphasised that “issues of bullying and harassment” should be reported through the University’s Dignity at Warwick policy. This is for students who ever “feel threatened or unsafe on or off campus”. He added that formal complaints can be raised with the SU here.

Despite this, in WARSoc’s initial statement, they pointed out that “the Warwick Accommodation handbook has absolutely nothing regarding racism” in it. Though Dignity at Warwick exists, then, this suggests that it is not being advertised in the most important of places and it is not clear how many are aware it exists, or of its successful application.

They added: “yet the institution will happily shout about diversity and champion signing the Race Equality Charter.”

In this case, perhaps the Dignity at Warwick policy is less effective than the SU suggested.

If you have experienced racism on your campus, gal-dem want to hear about it! Send your testimonies to [email protected]