We were raised on blackface TV, but there’s no excuse for Chris Lilley’s new show 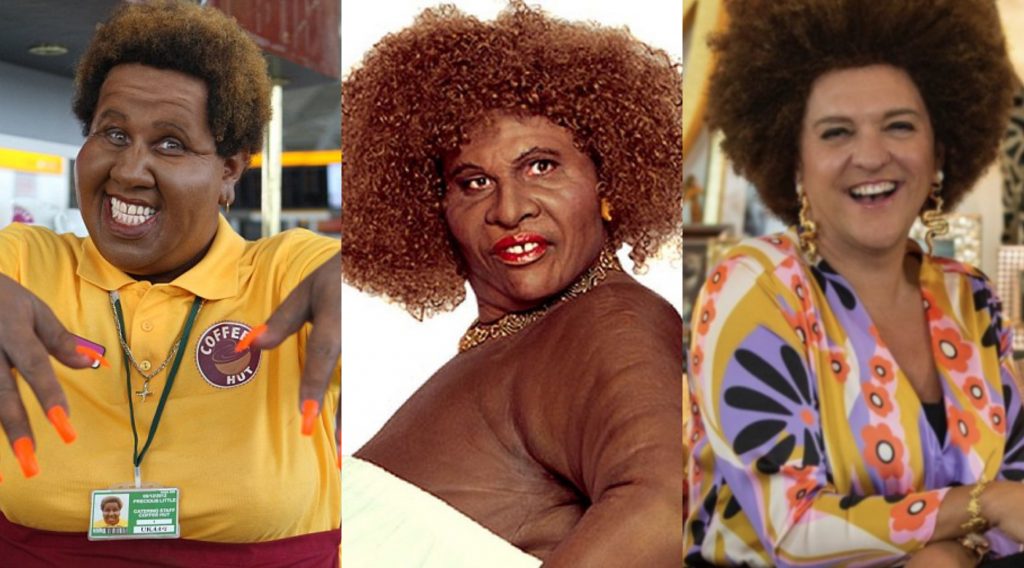 Everyone loves a laugh – but at whose expense? Last week, the fuckery emerged that Chris Lilley is back, and in blackface at that. Yes, the Summer Heights High comedian, who featured in many of our childhoods, has announced the drop of a new 10-part Netflix series called Lunatics that features a character that…well…see for yourself.

My first question has to be: Netflix, what were you thinking? Chris is no stranger to racism – he dressed in blackface for both Angry Boys and Summer Heights High, and released a parody video in which he uses the N-word 15 times. Now this character, Jana, described by the series as a “South African lesbian and a pet psychic”, sports an afro wig and a South African accent, and it took about ten seconds for Twitter to call it out as an example of blackface.

Sometimes dismissed as just a bit of fun and fancy dress, blackface has a long history of serving as an instrumental, cultural means of subordinating black people. Minstrel shows originated in the early 19th century, and entailed white entertainers painting on brown skin and big red lips as a crude impersonation of black people – often slaves, mammies, and “mulattos”. Minstrel shows weren’t only about grotesque optics, but also served to mock “black” behaviours and traits, like perceived laziness and dim-wittedness. And the trend of blackface persists to this day – with Lunatics simply serving as the most recent mainstream incarnation.

“The early 00s was a truly cursed era of TV that not only mocked blackness, but dabbled in transphobia, fatphobia, misogyny, classism and ableism”

This kind of post-watershed blackface, that operates under the guise of the comedy sketch show, found its own, horrid golden age in the early 00s. For many marginalised people, it was a truly cursed era of TV that not only mocked blackness, but dabbled in transphobia, fatphobia, misogyny, classism and ableism. Just a cursory look through the characters that graced our screens throughout those years looks like a tick-box list of offenses.

Andy Pipkin was the butt-of-the-joke wheelchair user in Little Britain; Desiree was played by David Walliams in a fatsuit and blackface; Vicky Pollard which Chavs author Owen Jones described as classic demonisation of the working class; Precious Little was Come Fly With Me’s resident Jamaican and Ali G was Sacha Baron Cohen’s chain-wearing slang-speaking rude boy. Similarly to blackface of times gone by, these characters aren’t just about mocking physical appearances, but about attributing stereotypical behaviour to certain groups.

This is tied into wider ideas that white men comedians can serve as blank slates – able to seamlessly try on (and dispose of) different identities for comic effect. Catherine Tate was one of the only women active on the scene at the time – and while some of her characters punched up (for example the comically middle-class Montgomery family), notably Lauren Cooper, aka “Am I bovvered?”, was inherently classist.

And it’s not as simple as times having changed – so many marginalised people have called these shows out as trash in the past. It’s often made out that there was a time that similar sketch shows were viewed as unequivocally hilarious – it’s only these days that everyone’s become “sensitive”. But when Sacha’s film Ali G in Da House premiered in 2002, there were protests by people of colour outside the theatre. The NAACP also protested “traditional” Mardi Gras blackface as early as 1956. Those who find it both tasteless and harmful have always been here, but with the help of social media our voices are now given a signal blast.

It’s also often framed that (overwhelmingly white men) comedians who still push this style of comedy are daring to go where no others are brave enough to. Comedians like Ricky Gervais, who’s said that freedom of speech is the “hill [he] will die on”, have often criticised what they see as “outrage culture”. Ricky told LBC’s James O’Brien last month that “just because you’re offended doesn’t mean you’re right”. But this misses the point of why our objection to this sort of comedy is important. It’s not about hurt feelings or being “offended” (whatever that means anyway) it’s about the damage that is done to certain communities by consistent trash representation in the media. The effects of comedians seeing our identity as a game add up – and have tangible, real world effects that comedians like Ricky and Chris will likely never understand.

Chris Lilley has issued no comment on the controversy, a tactic that worked for Sacha in the wake of Ali G. After all, if you don’t weigh in or engage in the debate, you can attempt to float above it and avoid getting dragged into a complicated conversation you might not be able to actually critically engage in.

The most devoted fans will also always come to comedians’ defence. In Chris’s case, tweeters who support him have argued that Jana is based on a Rachel Dolezal-style caricature – a parody of a white woman who tries to pass as black. If you’re on Lilley’s side, this might operate as a trump card – as if to say he’s actually poking fun at racism, not participating in it. Sacha also used this technique of a “false alibi” as a loophole for the legitimacy of Ali G’s character; with the backstory of him being a white, well-off suburban teenager who appropriates black culture, you can argue that Sacha is poking fun at cultural appropriation, not appropriating himself.

But this argument fails for two reasons – firstly, when black people are actively calling you out, that’s time to listen, not plough on full-steam ahead. And secondly, if you’re wearing an afro wig, or speaking in patois while wearing gold chains and trackies, does motivation matter at the end of the day? If it looks like a duck and quacks like a duck…you get the picture – it’s probably blackface.

While I thought this era of comedy was long dead and buried and keen to be forgotten, it seems Chris Lilley is having a hell of a time at the wake. Maybe history really does repeat itself. But just as was the case in the 00s, identity isn’t a joke, and it’s not “edgy” to do comedy that uses marginalised people as a cheap punchline. While Chris might attempt to palm off outrage using satire as a shield – rest assured: we’ve seen this all before.