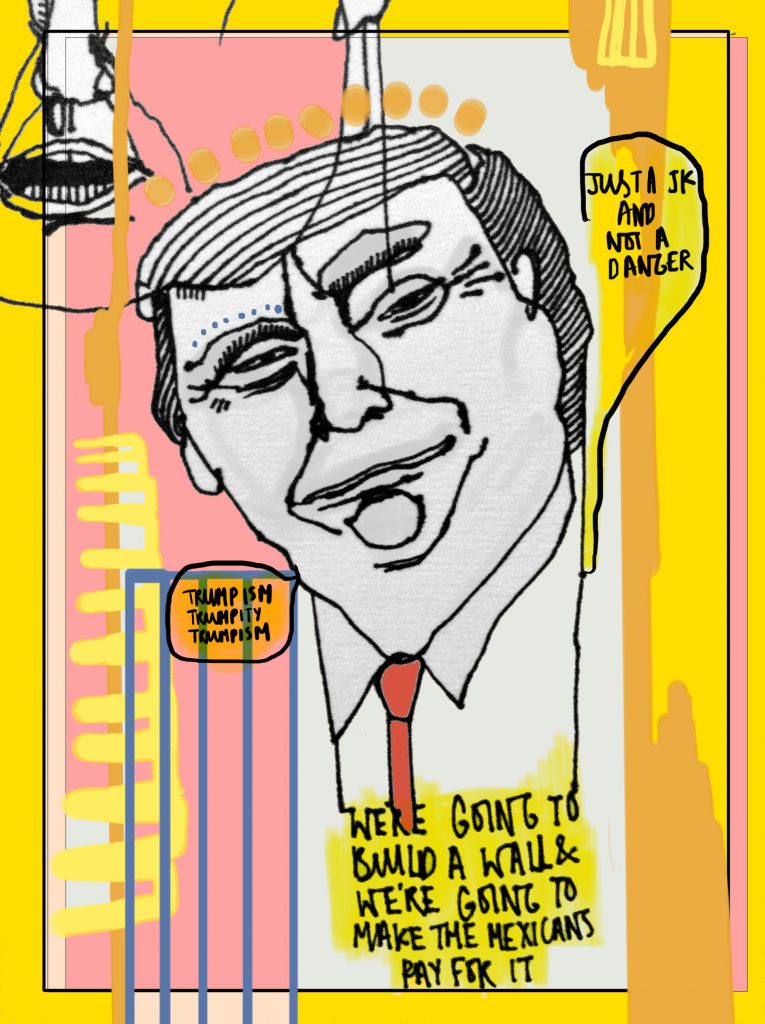 The election result that nobody expected – or dared to expect – is in, and Donald J. Trump (reality TV star) is now president of the United States of America. There is nothing to soften the blow. Republicans have control over the House of Representatives and the Senate so Trump may well have a carte blanche to grab as many people by the pussy as he would like.

Tonight is a night when words don’t come easily. It is the kind of night when you go to bed genuinely fearful of what lies ahead tomorrow. If the experiences of Britain after Brexit are anything to go by, we can expect outbreaks of xenophobic attacks around every corner. In the week following the vote to leave the EU the number of hate crimes rose by almost 60 percent. The reality may well be worse in the United States, where gun enthusiasts often gush in commercials between the six o’clock news. So if you are a minority, stay careful, and if you aren’t, stay vigilant.

Also, if you aren’t – for God’s sake, please don’t joke about moving to Canada. Yes, yes, we know that an “immigrate to Canada” webpage crashed some time before the election results were announced. As a Canadian I did chuckle once (though I chuckled twice at the tweet warning us that Niagara Falls would soon become Niagara Walls). But it isn’t funny. Middle class white people are not really the group in danger in Trump’s America. Undocumented migrants are in danger. Black people – those who Trump did not consider good enough to live in the properties he built across America – are in danger. Muslims are in danger.

In other words, the people in true danger are those that do not have the luxury of posting tongue-in-cheek statuses about moving up north. For genuinely disenfranchised people – those whose lives and futures will be tangibly affected (and potentially endangered) by this election result – the right to flit freely from Western country to Western country is a freedom too far-fetched to be spoken about ironically. If the people posting these sentiments have any regard for the people that Trump has openly come out against, they should use their platforms and voices to align themselves with them. Not to advertise their ability to go away if they so desire.

Whomever these people are, we know at least one thing – for one reason or another, they didn’t support Donald Trump. At a time like this, people that theoretically stand against division, xenophobia and hatred need to band together. The United States is facing some very real problems now, and to leave its vulnerable people to their own devices would be a terrible moral error.

Everybody still retains the right to joke about it, of course (that is, until Trump decides in January what we are and aren’t allowed to joke about). But we would do well to remember the serious plight of refugees, undocumented migrants, and working-class people of colour in our world today. If the United States you are waking up in, or near, suddenly feels like a hostile place, it’s because it is. But not to everyone.

The hostility is going to affect different groups in different ways. We need to ensure that we direct as much empathy as we can to people whose situations have suddenly become precarious in ways most of us can scarcely imagine. We all have something to fear. But we need to be as constructive as we can about this, going forward.

I was inspired by what Laurie Penny said after the disappointing May 2015 election in the UK: that the opposite of depression is not happiness, it’s action. Things going forward will likely not be rosy. But let’s do our best, even though the other team just dealt us a trump card. Everyone that can needs to rally now. Because other people’s lives depend on it.