What the F*** is up with Facebook’s policing policies?

So, Facebook has continuously flagged up our posts as inappropriate, discriminatory or promoting a certain ideal body type and therefore not eligible for boosting. Boosting is advertising which (for a couple of quid) enables your articles to reach a wider audience. This seems pretty bizarre considering that the ethos behind gal-dem is that of peace, love and good vibes.

Every time a new post is rejected for boosting, through an annoying little pop up message saying ‘your ad has not been approved’, and Facebook fails to respond to our defense, myself and the rest of the team sprout a few more grey hairs. I mean, what on earth is going on? If anyone can shed some light on Facebook’s bizarre policing policies please do let me know. I’m unsure as to whether there is a little man behind the computer screen picking and choosing which feminist organisations (particularly those run by BME women) to take down or whether they use algorithms which flag up any articles which contain certain words.

Either way it is really, really annoying and as one of our contributors, Esha pointed out: ‪ “What the fuck facebook! They always approve disgusting, traumatic, and hateful content but they don’t approve this?!‬”

It all started with Joanna Sing’s wonderful piece about body positivism and her interview with the CEO of Neon Moon, ‘a fully feminist lingerie brand’. Facebook didn’t like that because “it promotes a health product by focusing on an ideal body image.”

Hmm, really? Did the little man behind the screen not click on her article because, if he had – he might have seen that in the third paragraph she explains how she has “been equally enamoured with [how] Neon Moon is an ‘unapologetically body positive’ lingerie brand”.

I’ve definitely had adverts for diet pills and diet packages appear on my news feed, all of which contain images of the stereotypical ‘beach body ready’ girl with toned abs, white teeth and a spray tan, but when an article is published, which contains images of women who most can identify with, in lingerie, Facebook is suddenly super offended. I mean, god forbid we should have to look at a brown woman with a bit of meat on her bones. 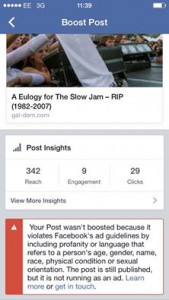 The next article to be rejected for boosting was April Brown’s piece: ‘A Eulogy for the Slow Jam: RIP 1982-2007’, in which she discussed why R&B would never be the same again. I find it hard to believe that the mention of Marvin Gaye’s ‘Sexual Healing’ is really so offensive. Facebook stated that including profanity or language which refers to a person’s age, gender, sexual orientation etc. cannot be boosted.

The article does contain the word sex and vagina but should these words in themselves be considered explicit? I’m not so sure.

We then come to  Jaye Akousa’s beautifully eloquent piece about hierarchies in marginalised groups and how to be an ally. This was rejected for boosting on the basis that Facebook isn’t allowed to promote material which insults or demeans people on the basis of race, gender, age etc.

In it, she writes: “I do not have to paint on an illusion of perceived disadvantage to show that I can empathise with those who do not benefit from the same privileges that I do. But I can lend an ear. I can seek guidance on ways that I can help. I can, not celebrate, but acknowledge the privileges with which I was endowed at birth in order to have the ability to say honestly, ‘I have no idea how you’re dealing with this shit, sister.’ Her word’s are quite possibly the antithesis of that which should breach the rules of Facebook.

The straw which broke the camel’s back – and lead me to write this was a few hours ago when Niellah Arboine’s vegan chilli was flagged for being vulgar and potentially threatening. Chilli goddamit! Chilli without meat, surely this is the most PC type of chilli you can get.

I would really appreciate if you could share this article, because Facebook will probably prevent me from doing so. If you happen to understand the algorithms behind Facebook or know any other reason why our posts are being blocked please (because the man behind the screen won’t reply to my messages) do holla!