Whose streets?: organising against neoliberalism in the wake of Charlottesville 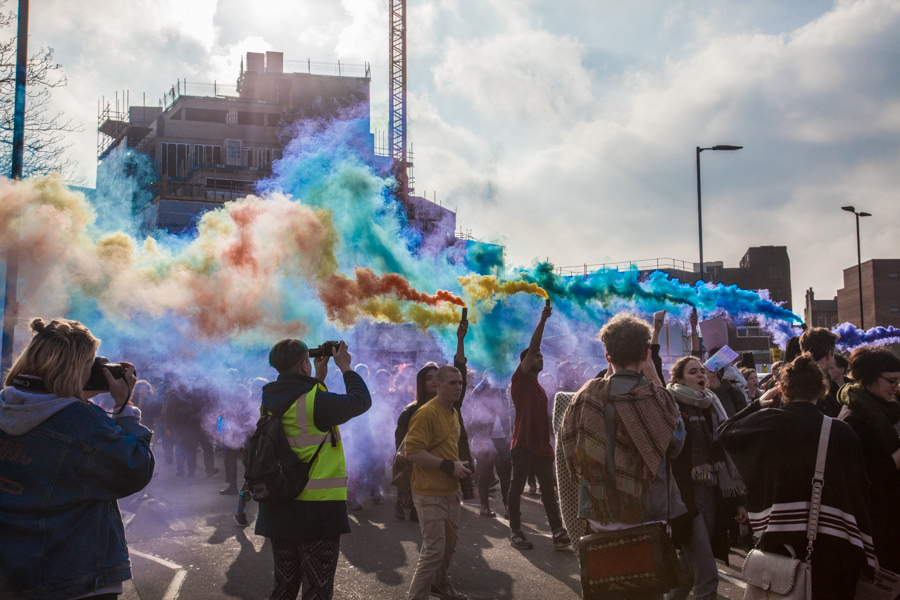 In a recent VICE documentary on the Charlottesville riots, Christopher Cantwell, white nationalist and self-elected speaker for US-based hate group Unite the Right, is asked to talk about “the right adopting the political style of the left”. He responds: “we don’t have the camaraderie, we don’t have the trust level that our rivals do, and that’s built up through activism, and that is one of the tactics that we’re adopting.” Later in the film, a feature writer for the Daily Stormer, tells us: “we are showing this parasitic class of anti-white vermin that this is our country, and it will remain our country. We are stepping off the internet in a big way…people realise they are not atomised individuals, they are part of a whole.”

What Cantwell and his fellow white supremacists are alluding to in these statements and others, is the alarming emergence of a new psychology of the alt-right. Elle Reeve, maker of the documentary said in an interview with Pod Save America that the “alt-right” as an organised group is different from its predecessors because it signifies an intentional “shift in demographics and tactics”. These groups have begun to adopt more “PR- friendly” modes of operation, such as ditching the swastikas in favour of polo shirts and chinos, and sharing white supremacist memes rather than burning crosses on their neighbour’s lawns. And as we see in the soundbites salaciously delivered by Cantwell and others in the Charlottesville interviews, they’ve realised that it’s “camaraderie and trust”, rather than simply the rallying cry of ethnonationalism that will enable white supremacists to build the kind of borderless movement they need to win.

And of course as UKIP, Alternative für Deutschland and Front National (to name a few) have reminded us, this terrifying lurch rightwards in mainstream politics is by no means specific to the USA. We only need to look back at Farage and Trump laughing maniacally in a lift made of gold to unburden us of that fantasy. Those of us on the other side of the pond are quickly arriving at the stark realisation that the devastating impact of neoliberalism on our social, economic and political lives will no longer be overlooked.

Neoliberalism is a strategically crafted political project that deliberately shifts the focus from the mechanisms of the market  (i.e. the means by which the forces of demand and supply determine prices and quantities of goods and services) to the ways in which we as individuals choose to allocate our resources to competing ends. Every choice we make, from which uni to attend to which job to go for, even whether or not to get a gym membership, becomes an investment in our “personal machine” and every outcome has to be examined as a success or failure according to the income it produces.

In light of this shift, the aim of neoliberalism as a mode of government is not forcing us to act in a certain way, but creating the conditions within which we will want to act in that way, believing that we’re making a free choice in our own interest. As Margaret Thatcher succinctly articulated: “Economics are the method. The object is to change the soul”.

And it worked. As Paul Verhaeghe documents in his book What About Me?, epidemics of self-harm, eating disorders, depression, loneliness, performance anxiety and social phobia are at an all time high here on rainy fascist island, and a recent study from the Happiness Index labelled Britain, one of neoliberalism’s most fertile testing grounds, as the loneliness capital of Europe. Great stuff.

Of course, it is no coincidence that the aggressive redefinition of the social realm would have dramatic consequences on the cultures within it. It is the emergence of this new narrative that paves the way for “benefit scroungers” and “welfare queens”, the pervasive perception of the economy as a bucket with finite resources, and the lack of organised resistance to the destruction of the NHS, equitable access to higher education and the welfare state. The urgency of perpetual re-evaluation of our own market value keeps us too busy, and too afraid to take to the streets in solidarity of our neighbours as they are violently gentrified out of their homes, or worse, burnt in their beds in order to save the council £5000.

But as activists left and right are coming to realise, our collective need for genuine emotion, connection, and for real community cannot be smothered forever. These desires are fighting to the surface in the form of million strong, global marches and uprisings, and in the unprecedented success of hatemongers, racists and bigots in democratic processes across the world.

The very idea of Unite the Right, the group that coordinated the Charlottesville riots in response to calls to take down a confederate monument, is predicated on this unifying, “broadchurch” thinking. They are a coalition of hate groups with different tactics and objectives coming together strategically across their differences to “reclaim the land” and call for an “ethnostate”. Emboldened by the scraps of meat thrown from the White House briefing table, what were once fractured groups of basement bigots now congregate in city squares, arms raised in Nazi salutes, chanting “Jews will not replace us”. If there is any hope of the left building resilient and effective social movements capable of driving this revolution back into the shadows, we have to begin by asking what a counterculture capable of speaking directly to the pain and isolation of neoliberalism might look like.

Speaking of the Reclaim the Streets (RTS) movement of the late 1990’s, American author and activist Rebecca Solnit writes: “The premise behind RTS’s street parties seemed to be that if what they were protesting against was isolation, privatisation and alienation, then a free-for-all party out in public was not just a protest but a solution.” And as Solnit reminds us earlier in the same piece, the term “politics of prefiguration” has long been used to describe the idea that if you embody what you aspire to, you have already succeeded.

The beauty of our organising and activism spaces, realised all too soon by the alt-right, is their ability to provide a microcosmic version of the world we wish to create. It is not only our opportunity but our obligation to step into the divisive chasms of loneliness, fear and alienation created by neoliberalism, creating spaces organised around joy, solidarity and community, around healing deep wounds and reasserting our own humanity.

Having spent the bulk of this year working with activists, organisers and thinkers here in the UK, and in the US exploring what the formula for a successful, systemic social movement worthy of challenging neoliberalism might look like, I’ve arrived not at a conclusion but a starting point. In the face of the cultural and political assault that neoliberalism presents, simply coming together to organise for something different around these values is in itself a radical political act.

The powerful movements that will lead us out of this darkness will not be solely defined by what they are against but what they are for. They will invite us in all our wholeness and complexity and contradictions, and in doing so will speak in many languages to many people. Charlottesville and the wave of fascist organising surrounding it serve as a stark reminder that the millions of “moveable middles” logging into Facebook and Twitter every day, or picking up a newspaper on the tube to work can and will be mobilised into resistance, one way or another. What their banners will say when they take to the streets, is all to play for.

Ayeisha Thomas-Smith is an organiser with the New Economy Organisers Network and lead trainer on their Movement Builders training course – applications are open until 3rd September 2017.