The new laws are despicable, but protesting as a black person means acknowledging that white supremacists might harm you. 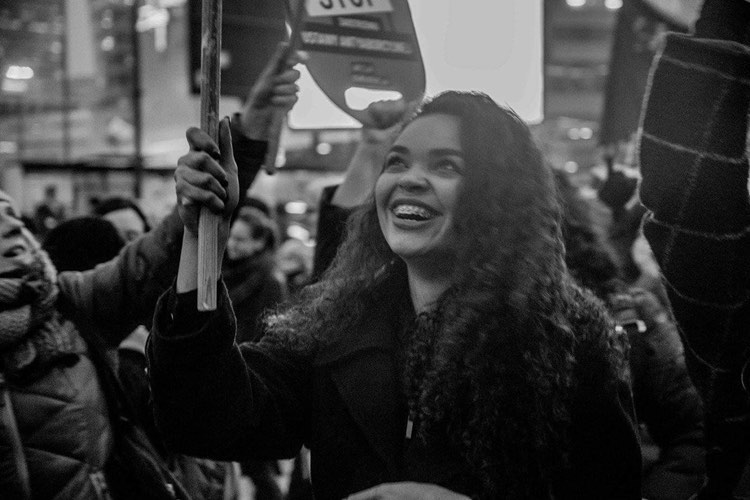 It’s no secret that since 1993, Poland’s abortion laws have been among the strictest in Europe. If you become pregnant in Poland, you can only have an abortion in cases of rape, incest, abnormalities of the fetus or if your life was at risk. And in October 2020, things got even worse. Poland’s top court passed a cruel law banning the abortion of fetuses with congenital defects, claiming it violated the country’s constitution and thus condemning thousands of Polish women to give birth to terminally ill children. So we decided to take to the streets.

As a Polish woman, the question wasn’t whether to protest or not. How could it be? Our reproductive rights, dignity and freedom of choice are in danger. We already have limited access to birth control, little to no financial, psychological or prenatal support and sex education is banned from schools. At present, about 96% of all legal abortions in Poland are of fetuses with congenital defects, which really puts into perspective how damning this law could be. It was no surprise that nationwide protests started immediately.

There are a few things you should know about my country. The majority of people who live in Poland are white and over 90% are Catholic. I wish I could speak more positively about Poland, but thanks to systematic discrimination against minorities, an openly anti-LGBTQIA+ agenda which manifests itself with more than 100 Polish regions declaring themselves as “LGBT-ideology-free zones” and the newly established anti-abortion law, I can’t. These pre-existing factors, coupled with the fact I am a black Polish woman, make the current situation that much more difficult.

“Being different from the ‘typical’ Polish person taught me about discrimination”

My mother, her family and the majority of my friends are white. Growing up my Angolan father was one of the few dark-skinned role models in my life. Being raised in a mostly white country, all of my experiences and years of seeking my true identity – feeling stuck between being too dark to be considered Polish but too light to feel like a true Angolan – have shaped my personality. Being different from the “typical” Polish person taught me about discrimination and empowered me to speak out and always support minorities.

When protests in Poland started, participating in them felt natural. Each day I received more and more information about other protests taking place all over the country; from the streets of small villages to the centres of main cities. A red bolt sign worn by protestors became the main symbol of the pro-choice movement. As a final-year dentistry student, I couldn’t participate in protests every day, so I treated patients wearing a facemask with the symbol drawn on. At first, I was worried that my professors would ask me to take it off but no one said anything as the majority of universities joined the protests as well.

After a whole week of protests I felt overwhelmed, outraged and sad that in the middle of a global pandemic, the Polish government forced us outdoors. I decided to join the biggest protest in Warsaw, “the greatest large scale movement” in the fight of this atrocious law. The estimated number of protestors set to attend was around 150,000. Unfortunately, not everyone who was coming had good intentions. As far-right wing white supremacists grow in power with the support of the Polish government, there were frightening whispers that the police, army and white nationalists would try to suppress and fight the protestors.

While the protests have been overwhelmingly peaceful, I knew I would be one of few darker-skinned protestors, and to be honest, it made me very anxious. I am completely used to being the only black person in the room. I am used to people staring at me or trying to touch my hair on public transport. But while it doesn’t happen often, sometimes I wish the colour of my skin was less visible. Before the protest, I read the list of things I should take with me just in case I would be stopped by the police, beaten up or pepper-sprayed.

When I arrived in Warsaw, walking to meet my friends, I received a text from my mother saying that men from a far-right group would be hidden among protestors and that when they got a signal from their leader, they would don a white armband and start attacking protestors. The whole atmosphere was tense. Even though we were all walking together you could just feel the level of frustration and helplessness growing. In some parts of Warsaw, nationalists started attacking people and throwing flares. During the demonstrations, I was anxiously looking around my shoulder to check if there were nationalists on the prowl. I was scared and more aware of my blackness than ever.

Fortunately, everything ended up okay for me and friends that night, but protesting is just the beginning. We don’t want to live in a country where basic human rights are questioned. The deputy prime minister, Jaroslaw Kaczynski, and other influential politicians call our protests “an attack” and us women fighting for our own rights “criminals”. But no revolution was ever won by just sitting quietly. We will keep shouting because it’s not only the right to abortion we are fighting for.

When I think about my future I really hope that Poland changes. I don’t want to be forced to leave this beautiful country. I was lucky enough to be born in a family where fighting for what’s important was always encouraged, especially by my mother – who has joined me protesting. But in order to create change, we need more young and open-minded people who are ready to take matters into their own hands.

If you read this, please tell somebody about what’s going on in Poland. We really need all the support we can get in this unequal and unjust fight, especially those of us with dark skin.

Sara Alexandre is one of the co-creators of the #DontCallMeMurzyn campaign, which condemned the racial epithet used widely to describe and address black Polish people and ignited a conversation about race in Poland in Summer 2020

From being a fitness influencer to living with an invisible disability