Writer and organiser Lola Olufemi on why creative thinking is crucial in the path towards a radical feminist future. 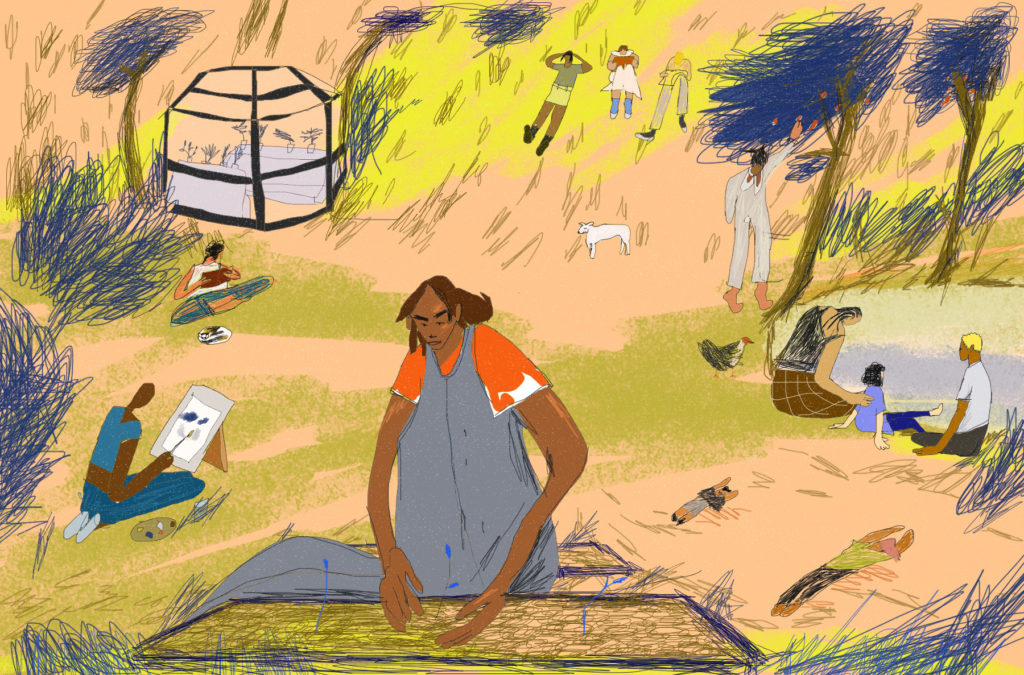 The following is an extract from Lola’s new book, Feminism, Interrupted, published by Pluto Press.

Feminism is a political project about what could be. It’s always looking forward, invested in futures we can’t quite grasp yet. It’s a way of wishing, hoping, aiming at everything that has been deemed impossible. It’s a task that has to be approached seriously – we must think about the limits of this world and the possibilities contained in the ones we could craft together.

Everybody has a story about how they arrived and keep arriving at radical politics. Some of us are politicised by the trauma of our own experiences, by wars waged in our names, by our parents and lovers, by the internet. It’s useful to share the ways we become politicised if only because it helps politicise others.

Growing up as a young black woman, I felt the oppressive way the world was organised with my body and through interpersonal relations long before I could articulate what those feelings meant. Revelling in the discovery of the word “feminism” and its history as a political practice in my early teenage years at school, I found a form of personal freedom. I read ferociously. Black feminism, liberal feminism, Marxist feminism, anarcha-feminism, eco-feminism. Feminism opened up my world. In it, I saw conflicting theorists and activists, all giving their ideas about the way the world should be. Perhaps most memorably, it released me from the desire to comply with the world as it is. This meant many things for me as an individual; feminism allowed me to be wayward, the wrong kind of woman, deviant. It took me longer to realise that true liberation meant extending this newfound freedom beyond myself. Just because I felt freer in some respects, did not mean I was free.

The material conditions of my life were still determined by the same systems; poverty and racism still trapped the women around me. Disparities in healthcare, education, public services and access to resources limited the possibility for any kind of expansive existence. I saw how black women were locked out of womanhood as defined by white supremacy and how anyone outside of those accepted boundaries simply did not exist in the eyes of mainstream feminism. I began to understand how my own rebellion, the defiance instilled in me by the feminists I admired, was raced and classed. I read about how freedom requires upheaval and must be fought for, not romanticised.

“Feminism opened up my world. In it, I saw conflicting theorists and activists, all giving their ideas about the way the world should be”

It was during this period that I realised that feminism was not simple. There were no pre-given solutions. The “answer”, if there was one, required us to place different feminisms in conversation and necessitated a radical flexibility in our organising. Feminism was complicated and messy in ways that made me reconsider my foundational political beliefs: equality versus liberation, reform versus abolition. Feminism meant hard work, the kind done without reward or recognition, the kind that requires an unshakeable belief in its importance, the kind that is long and tiresome, but that creates a sense of purpose. It proposed a new way of being that transformed the way I looked at the world.

The feminists I admired argued that the abolition of all prevailing systems of violence was crucial to any feminist future. They called for a revolution in the way we think about ourselves and others. Their critiques of the state, capitalism, the family, white supremacy, sex and education encouraged in me a rejection of what was expected. They provided a place to say the unsayable. bell hooks writes about how she came to theory “desperate, wanting to comprehend – to grasp what was happening around and within me”. The same can be said for many young women who come to theory to be given a blueprint for a better world; who come to theory looking for a way to be changed.

I knew I had to choose what kind of feminism would form the basis of my understanding. My experiences had taught me that nothing should be taken for granted; there was no coherence or consensus on accepted principles in the feminist movement. If anything, it was defined by conflict.

Imagine this: A world where the quality of your life is not determined by how much money you have. You do not have to sell your labour to survive. Labour is not tied to capitalism, profit or wage. Borders do not exist; we are free to move without consequence. The nuclear family does not exist; children are raised collectively; reproduction takes on new meanings. In this world, the way we carry out dull domestic labour is transformed and nobody is forced to rely on their partner economically to survive. The principles of transformative justice are used to rectify harm. Critical and comprehensive sex education exists for all from an early age. We are liberated from the gender binary’s strangling grip and the demands it places on our bodies.

“Imagine this vision not as utopian, but as something well within our reach”

Sex work does not exist because work does not exist. Education and transport are free, from cradle to grave. We are forced to reckon with and rectify histories of imperialism, colonial exploitation, and warfare collectively. We have freedom to, not just freedom from. Specialist mental health services and community care are integral to our societies. There is no “state” as we know it; nobody dies in “suspicious circumstances” at its hands; no person has to navigate sexism, racism, ableism or homophobia to survive. Detention centres do not exist. Prisons do not exist, nor do the police. The military and their weapons are disbanded across nations. Resources are reorganised to adequately address climate catastrophe. No person is without a home or loving community. We love one another, without possession or exploitation or extraction. We all have enough to eat well due to redistribution of wealth and resource. We all have the means and the environment to make art, if we so wish. All cultural gatekeepers are destroyed.

Now imagine this vision not as utopian, but as something well within our reach.

The vision I have presented has its limitations. There are gaps, contradictions and things that have been omitted. But without the capacity to imagine in this way, feminism is purposeless. Let us fight over a vision because our demands must spring from somewhere. This is the task handed down to us and we must approach it with the urgency it demands. We must rise to the challenge with a revolutionary and collective sense of determination; knowing that if we do not see this world, someone else will.

You can buy Feminism, Interrupted here.

Naya Rivera gave hope to a generation of black, Latinx and queer people