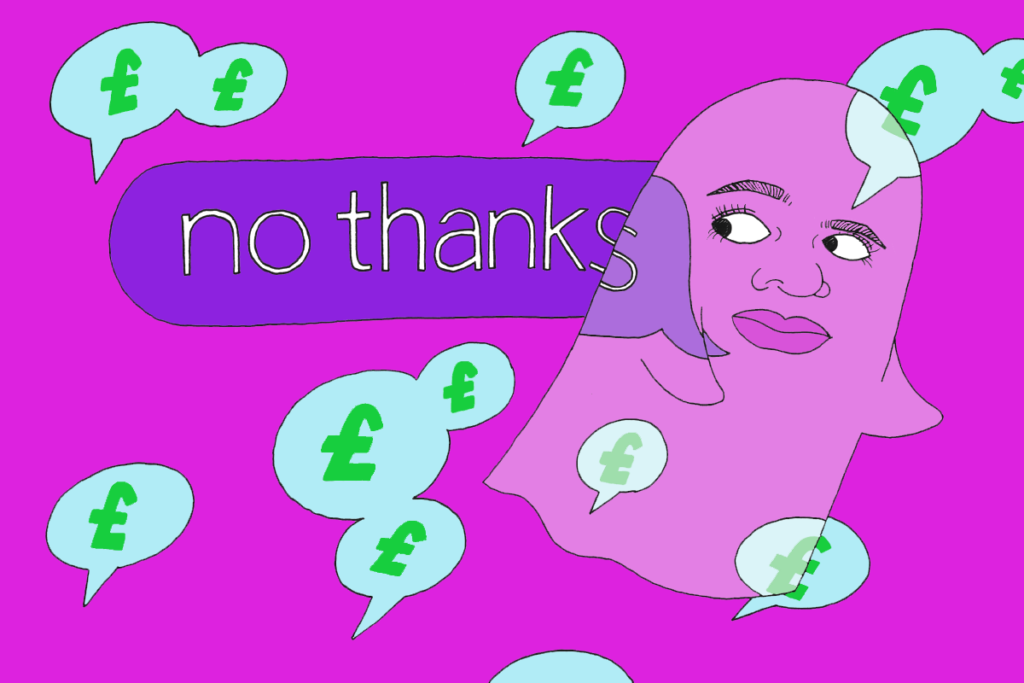 After meeting a man at a sex club and going on a bad date, gal-dem‘s love, sex and dating columnist explores the ethics of a casual ghost.

I haven’t written this column for some time. So long has passed that I’ve had two birthdays, two prime ministers and, tragically, only had sex six times (pray for me). A lot has changed in my life and it’s a struggle to keep track. So to make it make sense, I’ll start with a list which brings me back in time to shortly after I’d written my last column, pledging to banish bad sex in 2019. I am a lover of lists. I’ve been known to draft detailed New Year’s resolutions, complete with sub-headings and time-bound targets.

In December 2018, my resolutions were as follows:

In November, I’d bought a ticket for sex club in a flurry of flash in the pan self-confidence (under the guise of trying new things and being sexually adventurous). By December, this now seemed distant and ludicrous. At the very least, I was getting ahead on two of my New Year commitments before the year was out. It was also expensive but non-refundable. I went with a friend who had spent time in Berlin. She was staying in her sister’s place in Brixton while she was away. It had the signs of middle-class adulthood: pictures in frames, in the wall bookshelves and homely minimalism. We could get ready and play Robyn’s greatest hits without interruption. I had previously been at a vision board party and in the haste of switching my vision board supply bag with the sex attire bag I’d only packed one suspender – disaster.

Graciously, she sacrificed a pair of pristine tights to cause.

1) Tights cut to knee length for makeshift suspenders? Check
2) Vodka in a plastic bottle for the journey? Check
3) Adequate outerwear to cover up for the bus journey? Check

The venue was a well-known London nightclub where I had celebrated my 18th birthday but never returned to once I’d actually made the city my home. Then, I had been a virgin who gave guest lectures to my friends on the dangers of second-hand smoking and was oblivious to the fact that everyone else but us was on amphetamines.

Here I was, again, nine years later, as a new woman. Sexually liberated! Had smoked multiple cigarettes (and spliffs)! Had taken Class A’s!

Stripped of my outer layers and dappled in strobe lighting, I was suddenly alerted to my awkwardness. I was not as far off from the person I was nearly 10 years before as I’d thought, standing by the same bar buying a single spirit mixer that was inexplicably priced at £10.

Could everyone smell my discomfort, diffusing from me and poisoning the air like a teenage boy doused in too much Lynx Africa?

I thought about writing about my discomfort, which comforted me. There was nowhere to stand and just “be”, and no toilet to hide in. Maybe it’s that the event was too white. Maybe I was too awkward. What I wasn’t, was drunk – but that I could change.

Getting tanked worked like injecting Megan thee Stallion lyrics directly into my veins. Then some black men arrived and I didn’t feel as out of place. I could finally have a good time.

I had sex. And somehow, I left the club with a phone number.

In early January, he reached out but I reneged on his offer of casual sex. I was having a debilitating period and it was winter, so I couldn’t be bothered to leave my house or speak to anyone I hadn’t known for at least five years. He offered a PG-rated date – a Sunday afternoon coffee – as an alternative. He claimed it was so he could get to know me properly. He was persistent and polite, which was enough.

“I had sex. And somehow, I left the club with a phone number”

But then he was already drinking a cocktail when I arrived – coffee was off the table, I guess. I was “well-spoken” (whatever that meant) and not like the girls he normally dated, he told me.

“I got a scholarship to boarding school. It’s why I speak like this. My family doesn’t have money or anything. It is what it is,” I said.

“Hmm, did you get with the other girls?” He licked his lips.

“No. It was co-ed…boys and girls. And I didn’t live there anyway.”

“Did you listen to Oasis then?”

I do think the song ‘Don’t Look Back in Anger’ is white excellence, along with all whiny white boy indie circa 2009. I had been to indie haven Fifth Avenue in Manchester on many occasions. I’ve got the range.

Sex club guy was newly single. Now back on the market, he was very in-demand, he assured me. His ex was a model, supposedly. I had not asked about her or her profession.

He made sure our chat was punctuated with signifiers of his wealth. When he said he was spending the summer in Marbella, I knew we would not make it to the summer.

“When he kissed me, I recoiled and wondered how two people could have such divergent interpretations of the same event”

I offered to buy a round of (alcoholic) drinks. He had bought the first ones after all. “Get off that feminist shit. I’ve got half a Mill,” he muttered audibly with false humility. I acquiesced so I would not have to acknowledge the humblebrag.

When he kissed me at the train station and he brushed his thumb against my cheek, I recoiled and wondered how two people could have such divergent interpretations of the same event.

I hoped he would not message me. When he did, I used the tried and tested technique: reply with one line and no further questions or inquiries. When this didn’t work, I ghosted him.

Over a week later, the ghost of Christmas past was back – he had messaged again. I consulted an expert group chat, my old colleagues, for advice.

I sent the uncomfortable “no thanks” message to sex club guy. He responded with the monkey-holding-its-hands-over-its-eyes emoji. The ghost of Christmas past was extinguished.

But what did I owe this guy, a guy I met twice and barely knew? Was it wrong to ghost him in the first place? If we only met twice, one being casual sex, what did we owe to each other?

When courtship is commodified and dating is a market in which potential partners are in endless supply, how much are the feelings and time of others worth?