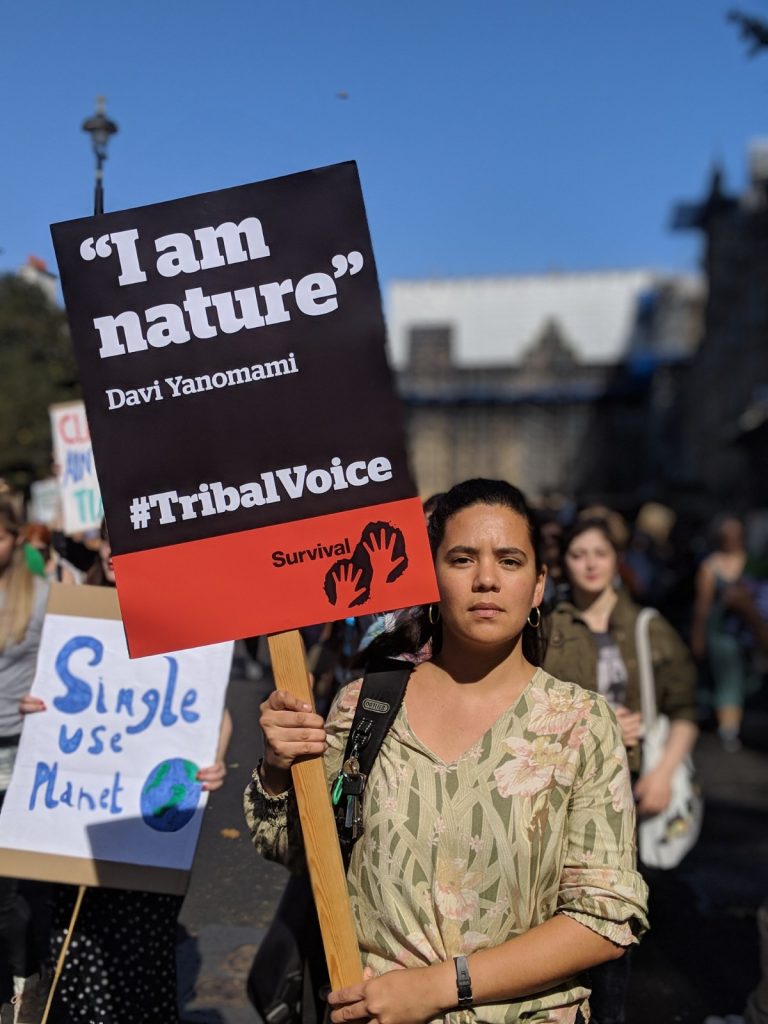 Today, millions of people across the world mobilised for the Global Climate Strike, calling on their governments to start enacting solutions to climate breakdown.

Here in the UK, the environmental movement has a whiteness problem. People of colour will be the first to be affected by climate change, but they’re the voices we seem to hear from the least on this matter. The face of the climate movement has seemingly become the white middle-class because they have the privilege of being able to take time off work for these protests, the money to significantly change their lifestyles to be more eco-friendly and the security of being able to trust the police.

With that in mind, I headed out to Westminster to join the protests and talk to women and non-binary people of colour about why they came out today and what organisers could be doing to better include people colour.

“I’m a researcher and campaigner with Survival International, the global movement for indigenous people’s rights. We’re out here today to get people talking about the real experts in climate justice and the people we should be talking to.”

“I’m here with Health Poverty Action because it’s getting a bit ridiculous now. We have all the information and we know what’s going on, so we need to start making a change. It’s pretty easy to make little changes, but it’s the systemic changes that are gonna make a difference.

I know it’s a strike and not everyone can afford to have time off work – I’m not getting paid today, which is problematic. But just making sure that we’re changing how we talk about these things is important. Saying things like, ‘We’re defending, we’re protecting the Global South’ – I don’t think it’s appropriate. It’s white saviorism. We can show them that we’re not going to hurt anyone else by stopping fracking and all these things. A lot of people of colour rebel against that charity narrative, so I think it’s about giving people the tools to help themselves and collaborating with people of colour.”

Valerie: “We tend to put the climate to the side, brush it under the carpet – but at this point we just can’t avoid it anymore. We have to face the crisis that’s going on and help to spread awareness. We’ve got to spread the message.

I do think there’s a lack of diversity. But I think that’s because it’s brought class into things as well. Middle-class and white people, they have more free time to be able to make it to these protests. The working-class are usually minorities, and they don’t have time to be taking off work. They fucking have to look after their families. So it’s understandable that there’s a lack of diversity, but there needs to be an effort to bring people of colour into the group”

Tyeler: “The time for talking is over and it’s time to start doing stuff and showing people we’re serious about the message we want to spread.

We do have to be more conscious of little things like changing the day even that could bring so many people to the meetings. I think also in the black community you don’t want to talk about social issues because you’ll be labelled as an angry black person. I think that’s a lot of stigma that makes people of colour stay away from these things.”

“I work in a university and we do research into climate change. I think when you realise that our governments are using our money – taxpayers’ money – to invest in fossil fuels. A huge amount of our money is used to prop up the industry, and if they invested that in green tech then we’d be in a better place already.”

“I’m here to bring attention to the fact that Borneo’s forests are burning. If we had a lot more information presented about the intersection between racism and environmentalism I think that would be attractive to people of colour who have been afraid of the histories of racism and racial tension that have been present in the environmental movement.”

“I think it’s really important that we as young people stand for what’s important, even if it means missing school. There won’t be a school for us to attend in the future if we don’t do something. I think companies need to show that they’re not doing it for profit, they’re doing it for the right reasons. In our school we have a diversity week and it really helps and makes us feel empowered.”

Yasmin: “All of my office are on strike, but my own reason is that I think just showing up and being a part of this is the first step, even if you’re not an activist.”

“I’ve been to every climate strike since March. A lot of the issue is with police. Their presence is intimidating for everyone – people of colour especially, who they discriminate a lot against.”

“I’ve been a climate change activist for five years. When you look at climate change, the people who are affected are the most disenfranchised through race, through class. People across the world who are the most vulnerable are being affected by our consumerism in the West. It’s important that we raise awareness that it is not just a Western issue.”