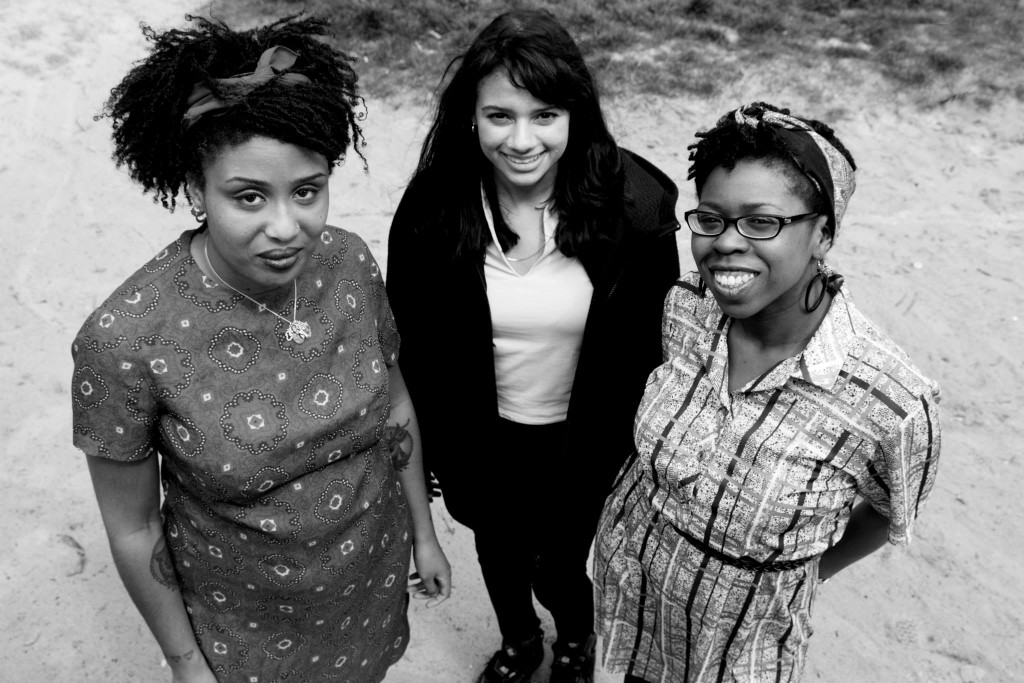 It’s been over two years since Big Joanie first formed as part of the First Timers project to boost diversity within the London DIY punk scene. As per the requirements, all three members of the band were new to playing their instruments and performing in a band for the first time. Chardine picked up the drums, Kiera plays bass while Steph sings and plays lead as well writing most of their original songs.

They’ve been always been active members of the DIY community, participating in live shows for festivals and fundraisers that focus on feminist issues and social justice movements close to their hearts. You may recognise Chardine’s name from various panel discussions around London, most notably a TedxTottenham lecture last month on black feminism in punk. Kiera volunteers most of her time organising with groups focusing on the housing crisis and Steph’s main job is with a non-profit dealing with LGBTQIA youth among other things. They are proudly black and proudly feminist punks.

I caught up with them at the STRIKE! magazine anthology launch party. The event was comprised of workshops, panel discussions and live performances from Big Joanie and other artists and spoken word poets. We found time to chat about their experience as a burgeoning punk band and the politics of race within the DIY scene.

Steph: Yes, in some ways it is. It is a very immediate way to harness your own culture and create your own ideas about what art is. I think it’s difficult, difficult to find time and space to be creative in a culture that in some ways doesn’t value that. But it is possible, definitely.

Kiera: I think music has always been a part of radical resistances. So it can be an inherently radical act to be in a band and perform in music events that align politically with your values, for example fundraisers.

How does your origin relate to who you are as a band today? Do you still feel like first-timers?

S: I don’t really. I do in terms of the fact that I’ve never sang before. But I don’t think I’ll ever get over that.

You’re often labelled as a black feminist punk band. Do you believe that those are terms that describe your songwriting in terms of subject matter or thought process?

S: It doesn’t necessarily describe our songwriting style. When we joined the band, when we started we were just so happy to have a space as black women where we could be our full selves – to be into punk and still, you know, be able to quote bell hooks, be a feminist and not have to split those identities up. We just wrote about whatever we wanted really. We just wanted to be creative in every which way. We labelled ourselves a black feminist punk band because there wasn’t a black feminist punk band. There were black women in bands, they very rarely identified as feminist and even after that they very rarely acknowledged their race. So, I guess we just wanted to make sure that in this scene, people were seeing black women on stage. So that they knew it wasn’t a hallucination and that our identity is out there in the forefront.

Embracing that isn’t always a bad thing. Some people see it as tokenism, but for me it echoes other moments in black history when saying “I’m black and I’m proud” and putting your identity at the front of it was a really political and radical act.

S: It all depends on context. It can seem tokenistic to a white man who doesn’t really think about it, doesn’t think there’s more than one of us. But I think for black women they don’t think it is tokenistic.

K: We have had issues in the past where we’ve felt that we’ve been singled out and given a platform because of the fact that we’ve explicitly said that we are what we are, and there are questions of tokenism. Are we just being put on bills to tick boxes? But I think the fact that we are out there at all is a positive thing, despite those small instances.

Do you ever long for a day when black women can be on stage and just be “a punk band’’, without being racialised? It’s kind of great to be able to put identity at the forefront and say we are this black feminist punk band.

That you’re just black women and you happen to be in a punk band?

S: Yeah, when we’re on stage we don’t think about it.

K: And it makes it easier for people to find us. For other black women who are into punk who thought there were no black punk bands.

Isn’t that part of this scene anyway? Most people you share a headline bill with are quite political anyway and they proudly put their politics first.

S: Yeah definitely, I guess we are following in the footsteps of bands who have done that before. People thought of riot grrrl and feminist punk as really radical back in the 90s but now everyone is kinda doing that; it’s all feminist punk. So maybe people who think now that recognising your blackness or recognising your queerness, they’ll think that that’s really radical or that’s going too far, but it’s the same thing.

Can you be women in punk and not be political really?

C: I remember I was interviewing a band, who I guess are getting quite popular. I’m not gonna say a name, but they’re fronted by a black girl and there’s a black guy in there. I mentioned Afropunk to them and they said “Oh, you know I don’t wanna identify as black people in a band”. But I was like, um, you’re from a major city and there’s not many black people there and you’re two black people in a band are you not gonna acknowledge that? There was like a fear there. They actually played at Afropunk so I was a bit like, um ok. Some people feel like they’ve been overcompensating for so long by not trying to put their race forward, so I guess they’re uncomfortable really. That’s the only way I can explain that. Whereas we don’t have that issue. I think a lot of black punk kids are eternally in that cycle of ‘it’s not an issue it’s not a problem because we’re all the same’, because they don’t have a safe space to talk about race.

Don’t you feel like, people are gonna call you a Black Punk Band anyway, so you might as well adopt it?

C: Well yeah! I mean that’s what I think.

S: I’ve never thought about that really. I just generally don’t think about what white men think of us. I never have done and probably never will do. It’s all about what we want to do and how we want to create. How we want to reach other black women and show there’s more ways to be black than what society kind of tells you to.

C: I think we’re really clear about what audience we’re speaking to really.

I often feel that it is obvious that there are so many multitudes of blackness and how to be black and what your interest are. For some people it’s not so obvious and it’s easy to forget that. For some people, seeing black women on stage, playing punk music is novel or radical to them.

S: Do you mean to other black people [that it is novel]?.

S: I guess, I think it is probably outside our little crew.

K: If you think about respectability, if I think about anyone in my mum’s generation… well obviously there were black punk bands back in the day, but the notion of having young black women in punk bands is still completely novel to a lot of people and strange and a quirk.

I know you get asked a lot about your influences, and people are surprised that you’re into riot grrl and TLC. And that you’re interested in Nirvana and Erykah Badu or whatever. I’m not sure if you agree with this: that especially in our generation, we grew up with Limewire and Youtube, music was so accessible. So why is it still interesting even? Of course if you’re a thirteen-year-old girl and a music geek you’re gonna go online and you’re gonna find all the music that you want.

S: Definitely, society wants to corner off blackness in to this one little area so they can have their say on what it is.

C: I think some of the punk interest in RnB or TLC is… I don’t wanna say appropriative but it’s definitely a novelty and there’s an ironic interest in it which I find problematic.

S: It’s like when that one RnB song comes on when you’re at a punk night and everyone just kind of drops down low… just doing whatever they think is ‘black dancing’. And then they go back to whatever.

C: There’s a safety in liking black music that a lot of black people don’t engage with. You don’t see them at a black gig. It’s like with grime, you go to a grime gig and its full of white kids who would have been too scared to be in those spaces – white middle class kids I mean – in the noughties.

[The opening to ‘Zealots’ plays in the background]

I can hear them playing Fugees now.

C: This is what I mean! This record is what 15-20 years old. 15 years ago people on the punk scene would have thought this was shit.

K: Because it’s canonised or whatever.

And I always wonder you know when people express interest for something canonical like that, I wonder do you actually like it, have you listened to it or is it just because black music is cool now.

C: Yeah but this album was massive as well. It wasn’t even some underground Black Sheep record or something, this was stuff my parents might have listened to. I grew up in the Midlands and this was stuff that kids at school would have listened to – mainstream stuff, Eminem and Fugees. TLC were massive, all those people were huge. I DJ and some RnB records that I play, I think oh, people were loving this back in the day, but actually I realise it’s not white people RnB. So if you play Mary J Blige – Real Love for example, they don’t know that song, even though that was a big song.

So one last question, I’m not gonna ask who your influences are, I just want to know who you are listening to now. Who would you like to champion?

Or someone old who wasn’t given as much credit as they should.

K: I’ve been listening to a lot of Nadia Rose; she’s a grime MC.

What’s your thoughts on Mykki Blanco as a black punk contemporary? Are you in to it?

C: I mean I like some of Mykkie Blanco’s stuff but I do feel that a lot of it can be overrated. I’ve always thought that, out of all of them, Cakes (Cakes da killa) was the most talented lyrically of that scene.

K: I think as a performer though, they’re incredible. At the show it’s like a hardcore show.