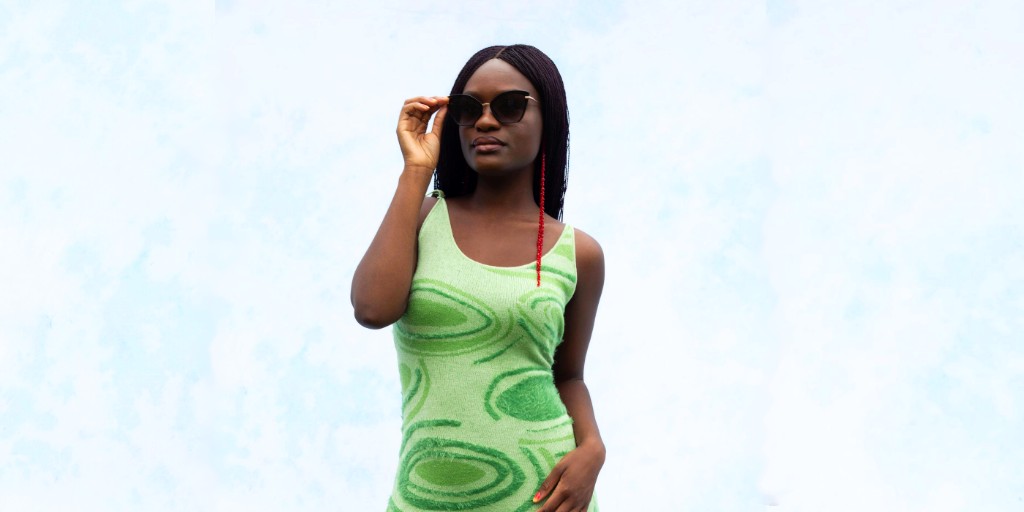 From Twitter to television, the Love in Colour author and rom-com connoisseur is laser-focused on telling stories about black girls living.

Once upon a time, there was a girl who lived a stone’s throw away from the river in the corner of London where the sun rises (East, obviously) with an enviable knack for storytelling. As her following continued to grow, more than 67,000 of them, they became increasingly zealous in their fandom, and to satiate their burning hunger for her words she presented them with a book. It was an ode to the motivating force that keeps her going, an emotion that for her represented endless possibilities, one that she had maintained an unshakable belief in: love.

This week marks the release of 29-year-old writer, tweeter and rom-com connoisseur Bolu Babalola’s authorial debut Love in Colour, an anthology that remixes ancient love stories from Asia, Greece, and around Africa for a new audience. When we meet face to face in her family home Bolu is in full glam, her face framed by microbraids, and her long eyelashes fluttering as she flashes a welcoming glossy smile. Throughout our encounters over the phone, on the internet, and IRL, she comes across as intelligent, funny, and manages to be open without actually revealing too much about the intimacies of her own life. It’s intentional.

“I’m not a celebrity so I find being asked intimate questions about my own love life quite weird. I can talk about the dating experience of black women in general but I can’t talk to strangers about too much,” she says, switching into a more formal and Nigerian cadence. “We don’t talk about the intimacy of our life in public like that. What’s your business there?”

As someone with a huge platform, people often incorrectly assume proximity and familiarity. You know what TV she’s watching (“I get through a lot because I don’t sleep, I work constantly and I don’t leave the house. It’s how I escape”), you know she has a crush on Michael B Jordan, who she actually met after pretending they were dating, and also you’re aware of how much she reveres her Nigerian heritage. She writes passionately about the things that bring her joy, which is what draws her fans back to her tweets, her stream of consciousness. Soon she will release another novel which she has been teasing online (a collegiate rom-com set in an Afro-Caribbean Society in a UK university, where enemies become friends and eventually lovers); she has been in the writer’s room for a BBC project and has her own show in development with Tiger Aspect, which we wait for with bated breath. Despite what we know mostly revolving around her online presence, over the course of our time together, I catch a sneak peek behind the curtain.

Bolu is excited at the prospect of doing a styled shoot. We’re draping her in Simone Rocha jewels, pearl-encrusted Shrimps bags and dresses from designers House of Sunny, and Ganni. The decadence is intentional. How often do we see young British black women in the creative scene adorned? As she acts out familiar romance tropes like “the girl next door” the strong-willed “boss bitch” (who she lovingly nicknames Blair Jollof, a riff on Blair Waldorf from Gossip Girl), the “arty free spirit” and “savvy media girl”, it only further drives home the rarity. Not only of seeing black women placed within the world of romance but just loved openly.

She says: “These are the archetypes you’re used to seeing white women play. They’re fun girls, independent, they have their own minds and they have access to their own iteration of romance. Why don’t we have that?” As her own star rises, and her fandom intensifies, Bolu represents a new archetype for young black British women. Media savvy, intelligent, and loved unapologetically for her ability to love.

“Love is universal so it’s accessible to anyone. But in my heart, I’m always working for black women. It’s nice to see us be cherished”

As it’s the week before her book release and she and her family are in very high spirits. There are photos hung proudly of a young Bolu in her school uniform. Her mother Olukemi is thrilled to learn we share the same name. After meeting Kemi I am introduced to Bolu’s little sister Demi but informed that her father, Femi, is not home. It was around this time I realised that she was Yoruba through and through because our culture’s penchant for “emi” names is unmatched.

Her mum is perhaps the most accommodating host you’ll ever encounter. Throughout the day she offers myself and the photographer jollof rice, chicken, perfectly cooked plantain or “dodo”, cake and custard accompanied by orange juice which came to us with a separate cup of ice and tongs to pluck the ice from the glass. Each time an item was placed on the table it was accompanied by squeals and respectful rounds of “thanks aunty”.

There’s always something grounding about being cooked your native dishes and keeping Bolu connected with her ancestral roots has clearly been high on her parents’ priority list.

It’s this love of connecting with cultures outside of Western dominance that helped her refine the book’s concept. “In the mainstream, we know Brothers Grimm but there are so many cultures in the world where you don’t know their early stories,” she explains. “People say the word ‘dehumanising’ a lot about physical violence, but if humans are defined by their stories, one effective tool is completely hiding their culture. What art did we create before?”

A keen learner, Bolu took time in her writing process to research tales from Yoruba communities that pre-date the arrival of European colonisers and then fell into a wormhole. She found intriguing and compelling narratives from around the globe. “The thing is there’s not a lot of love stories in any culture, even things like Romeo and Juliet are actually about war, it’s about conflict. So I had to dig into these tales and find the romance,” she says. Each chapter follows a new character from these archaic epics and places them in a new short story about finding or understanding love.

Bolu has tweeted about how research-intensive her writing process is. As she was writing about tribes other than her own she spent time in Nigeria, where she often hops back and forth from, to immerse herself. The trip reaffirmed her belief that even within the continent no country is monolithic, “yet it’s barely been tapped into as a lot of the narrative looks into the ramifications of colonialism and how that warped so much of its story”.

She drew on ancient Orisha religious text, and created a fantastical view of Africa before its subsequent invasion. “In one of the stories when I describe palm wine being drunk out of coconut cups it’s just like a fantasy world in my mind. You grow up in the West seeing these idealised versions of English history in these quaint village scenes, but when it comes to Africa we don’t get a glorified memory of rural ancient times,” she explains before laughing. “They would be drinking palm wine as that is local booze. I actually don’t like palm wine, I keep drinking it because it’s my roots and I have to pretend that I like the drink but I really don’t. Maybe I will grow into the taste.”

Of course, to modernise these tales meant giving the women a lot more agency than they were originally afforded. “I was thinking, how do I refine these stories from very patriarchal contexts that are often very violent and very unfair to the women and empower these women, while also paying homage to the roots, and to the themes of the story?”. In her mind, the key was to make sure each woman was fully formed so love is something they choose rather than need.

Every short story is named after its empowered character. Siya, a leading woman from a tale adapted from Ancient Soninke legend (a group found in modern Mali and Senegal), has a “whole ass war” going on and has to save her nation. Naleli is learning to become comfortable in her own skin, and in the original story from Lesotho, South Africa, her beauty is hidden by crocodile skin to protect her from “roving eyes”. “I had to pick out traits that I admired from the story, find the mulch I wanted to work with,” says Bolu. Afterwards she built each woman a partner that would compliment rather than control her, and avoided leaning on hetereonormative standards – including LGBTQI+ tales along the way.

Creating with intention and using storytelling as affirmation for her community is Bolu’s modus operandi. It’s these little flourishes that really set her apart. “Love is universal so it’s accessible to anyone,” she says. “But in my heart I’m always working for black women. 98% of the stories center black women and I really want them to feel like this is a love letter to them. It’s nice to see us be cherished for being soft and strong at the same time.”

Woefully it’s still such a rarity to see, and even somebody with an encyclopedic knowledge of the genre struggles to think of many examples. “I go to these TV meetings where they’re like what rom-coms can you point to that have the representation that you want to see and I legit can’t think of anything other than Insecure,” she says. “It’s a real portrayal, it’s not trying to sanctify dark-skinned women or correct it. We are messy like everybody else is but we can be tender and imperfect.” She also notes one of her favourite rom-coms is Brown Sugar, starring indisputable hottie and black romance icon Sanaa Lathan alongside Taye Diggs. But that came out two decades ago in 2002. “We make progress and then it’s stagnant for a time,” she adds.

Historically, whenever we do appear, dark-skinned girls are the sassy or messy side-kick who are merely an accessory to the story. We’ve been robbed of the chance to see ourselves as the objects of desire, or as multi-dimensional protagonists. “In the [black] sitcoms we grew up with, the matriarch was always a light-skinned woman. So I grew up loving Ashley Banks and Moesha because there were very few characters in those shows that were just dark skin black girls living,” she says. It’s worth noting that among black Brits, a lot of the positive reference points for blackness in pop culture tend to be American, but Bolu still found ways to be comfortable within her own context. “I always knew dark skin women were beautiful. I never tried to change myself into who the world says deserves love.”

Last year, the New York Times interviewed black storytellers from the 90s gold rush of black cinema who explained the damage of treating their ideas and narratives as if they were solely trends. It’s important that in a year with an appetite for African narratives like Beyoncé’s Black is King and Lionheart and the rise of afrobeats (which was recently given an official chart), that we don’t risk presenting blackness as the genre du jour.

“Even right now doing the press for this book an interviewer will say ‘this book is very of the moment’. And I’m like what does that mean? I’m actually writing about romance and love, which are the most timeless topics ever,” Bolu explains. “Are dark skin women in love hot right now? Because if that’s what you are saying then it’s sick. And you may mean it in the most benevolent way but it is insidious because you see me being loved or in love as a rarity or a novelty.”

Love in Colour is available in stores now.