Chidera Ihejirika explores the untold story of how alien ideas of rigid gender constructs were introduced to Nigeria – and why they persist today. 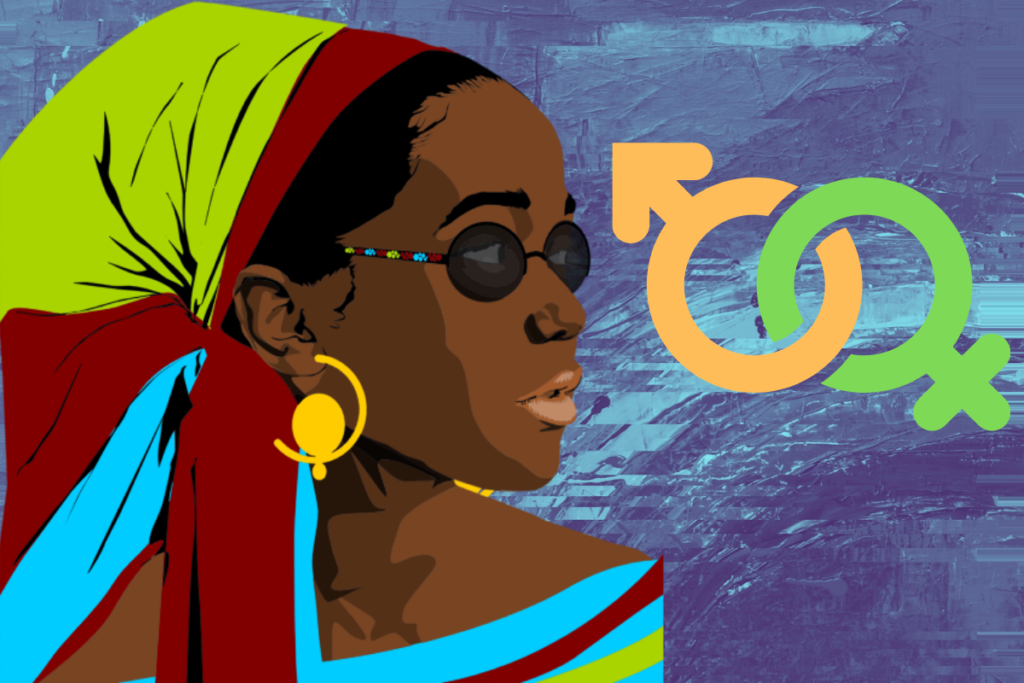 “Go call your sister, tell him it’s time to eat,” my mommy crooned.

I remember feeling so angry at the inherent contradiction in her statement. Some days we were she/her and others, he/him. I felt frustration and anger because I knew that she knew that we were girls. I was her first daughter, the “ada” of our family which, in Igbo, is a big deal. Finally, I had had enough.

“Mommy, why do you call me he sometimes?” I asked with genuine curiosity and frustration. She chuckled with knowing, as if there was some grown-up secret I had yet to be let in on.

“You know back home – we don’t have ‘he’ or ‘she’. Igbo pronouns are gender neutral. This he/she thing, it holds no meaning where we come from,” she explained.

At the time, I did not understand the depth of her statement. I did not know about the rich history of gender and sex in Igbo culture. That is, until I was introduced to the scholar Ifi Amadiume in my Intro to African Studies class. She was the first black woman I had ever encountered in my class reading materials after a decade plus of Canadian schooling.

A professor of religion at Dartmouth College, a private Ivy League university in the US, her research interests include African goddesses and matriarchy, gender ideology/philosophy in indigenous African religions and more. Most importantly, her work spoke of women like me; African women – Igbo women. Her eloquent analysis helped me truly understand my mother’s grown-up secret which frustrated me all those years. When I first read her work, Male Daughters, Female Husbands: Gender and Sex in an African Society, it all clicked.

“My grandfather was the only son and had two sisters. As a result, his sister became a ‘male daughter’ in their father’s compound. She bore children by her husband who would take her father’s name and thus safeguard the lineage. My auntie became a son in her father’s house, dealing with traditionally male affairs like land and property”

I discovered a pre-colonial society where strict sexual dualism did exist in a form. However, this was weakened by the flexible gender system of traditional Igbo culture and language. As Ifi explained, a major component of this gender framework was that “male roles were open to certain categories of women through such practices as “nhanye”- “male daughters” and “igba ohu” – “female husbands”. She laid out how this allowed “certain women [to] occupy roles and positions usually monopolised by men, and thereby exercise considerable power and authority over both men and women”.

In the case of “male daughters”, a father who does not have many sons may request that his daughter remain in his compound as a son to ensure that her father’s lineage remains protected. My paternal grandfather was the only son and had two sisters. As a result, his sister became a “male daughter” in their father’s compound. She bore children by her husband who would take her father’s name and thus safeguard the lineage. My auntie became a son in her father’s house, dealing with traditionally male affairs like land and property.

After the Nigerian civil war ended in 1970, the Igbos were heavily massacred. A lot of sons did not come home. My auntie became a “female husband”, marrying a wife for her late brother, who she brought to her compound. Her wife bore children by other men to continue her father’s lineage. She was a wife in her husband’s house and a husband in their father’s house.

Through this flexible gender system, women had access to economic resources and power. During the pre-colonial era, women were mostly the producers of food staples. A strong indigenous belief is that women provide for their children. In the Western context, these women would be considered breadwinners. They worked tirelessly as farmers and traders in order to provide for their children and this role of provider and principal food supplier gave women freedom to create their own financial independence.

In addition to being a “male daughter”, my grandfather’s sister was a farmer and a trader from Isunjaba, a village in Igboland. She had farmlands and sold tobacco, gin and food from her farm. In many cases, women took advantage of this cultural latitude and became wealthy merchants. Some of these wealthy, entrepreneurial women held the “Ekwe” title which, at times, allowed them to make the final decision in town affairs.

“The concept of women as market sellers, political leaders and successful entrepreneurs was foreign to the British colonisers. With their arrival, they brought a rigid gender binary which was deeply embedded into the fabric of the colonial empire”

Women ran their own political societies which held decision making powers in certain women-dominated spheres such as the marketplace, as well as broader social affairs relating to the village. In Ifi Amadiume’s village, Nnobi, “Inyom Nnobi” meaning “Women of Nnobi” was the women’s council who oversaw the welfare of all women in Nnobi. One of their specific duties was “to see that rules to safeguard or protect women against physical abuse were obeyed, for example, the ban on sexual intercourse with a nursing mother, and the two-year spacing of children” explained Ifi.

But all of this began to be eroded, with the arrival of the British in Nigeria in the late 1800s. The idea of women as market sellers, political leaders and successful entrepreneurs in those days was incredibly foreign to the colonisers. With their arrival, they brought a rigid binary and patriarchal concept of gender which were deeply embedded into the fabric of the colonial empire.

Slowly but surely, the colonisers marginalised Igbo women. While the previous framework had been no utopia, the changes that came with colonisation saw further reductions in the authority women had been able to wield. The title system, which once allowed women to hold power, wealth and freedom, was severely diminished. With the implementation of the warrant chief system, political institutions became increasingly dominated by men.

This system was positioned as an attempt by the British to get Igbo people to govern themselves. But in reality, it was a surveillance operation: Igbo hinterlands were not a convenient place for the British to settle. Colonial masters wanted someone to report to them directly that they could efficiently exploit and take advantage of as they saw fit. In the indigenous society, Igbos had councils of elders as well as chieftaincy titles but there was no centralised monarch. But the British used the chief system to enlist Igbo allies to implement the colonial structure across many villages.

“My ancestors were forces of nature, women who did not take no for an answer, who fought to free themselves and their descendants from a colonial structure where a woman’s place was in the house, subservient to a man. But within their own society, their power was being inexorably diminished by imposed gender norms”

My great-grandfather was a court clerk working in translation at the time of colonialism. Upon the arrival of the British, he became an ally to the colonisers, acting as the first warrant chief in Achalla, a capital in south-central Nigeria. He was known as the “Igwe” or “Eze”, which means king.

In my experience, this is where the story would often end.Anti-colonial resistance was not prized when I learned about colonisation in grade school, but I found the stories of fathers of independence like Nnamdi Azikiwe, Kwame Nkrumah and Senghor in the African Studies classes I took at university. I learned that Igbo women also held protests of colonialism and patriarchy during this period, although their action is conveniently left out of anti-colonial resistance histories. Ifi Amadiume wrote about how rioting by Igbo women from 1928 to 1930 eventually led to the collapse of the warrant chief system of local government. There was also the Nwaobiala: the  dancing women’s movement of 1925 which demanded a “rejection of Christianity and return to traditional customs”.

There is a quote from Nigerian Education – a series of essays examining Nigerian education and published in 1964 – systems which shows the drastic way in which colonisation completely brainwashed many into genuinely believing in the dichotomous Western understanding of gender.

“A Nigerian woman who cannot bake a light loaf of bread or prepare a good Nigerian dish or soup that is tasty, or happily employ her odd moments with a needle, or darn the stockings of her husband […] may be a very charming lady; she may keep her husband and friends posted about the new novels and new articles in the Sunday Times, Sunday Express or Sunday Post; she may try to make up her serious shortcomings by teaching in a school or being a nursing-sister [nurse] or secretary-typist; she may be a good writer in the columns of our papers and participate actively in many of the social and political courses of today, but she is an inefficient housewife and home-maker, and today in Nigeria, it is not given to many to make up for that.”

The writer goes on to compare the lack of “efficient housewives,” in the country to the “dearth of efficient mechanics,” and implore schools to waste less time teaching young women “literary education”.

Before colonisation, there was no such thing as a “housewife”. Women worked incredibly hard as providers, entrepreneurs and political actors. While nowhere near perfect, indigenous Igbo tradition gives women more freedom than the rigid Western gender construction. Yet, men in the post-independence era comfortably adopted the Western system which placed them far above women. Even sadder, there are Igbo men who continue to accept this as a fundamental cultural belief. Many remain oblivious to the fact that it is actually a major departure from the flexible Igbo gender system.

“In 2010, my grandmother was granted a chieftaincy title – ‘Ochi Ora’ meaning acclaimed leader in Igbo language. These titles are symbols of respect and regard, much like the pre-colonial era. Unfortunately, they lack the substantive power and influence that they once carried before colonialism”

Today in Igboland, the colonially constructed “Igwe” continues to be held by men only, serving a patriarchal function. Although there are Igwes across Igboland who have appointed women to certain positions or awarded them certain titles, these gestures are often symbolic in nature. In 2010, my grandmother was granted a chieftaincy title – “Ochi Ora” meaning acclaimed leader in Igbo language. The title acknowledged the many years she spent as a leader in Umuoba, a village in Anam.

My mother is considered “Ndi Ada” – a daughter of the compound yet, the power she wields is more as a result of her socioeconomic status and position as a professor abroad. These titles are symbols of respect and regard, much like the pre-colonial era. Unfortunately, they lack the substantive power and influence that they once carried before colonialism. Pre-colonial pockets of political influence have disappeared and become mainly symbolic in nature.

The dominant narrative surrounding colonisation today is that it was a historical event. Colonisation happened and then it ended on 1 October 1960, when Nigeria gained ‘independence’ from the British. As if healing simply requires that the traumatic event be over.

In examining sex and gender in Igbo society today, it is evident that colonisation was not just an event. Colonisation is a structure, an unhealed wound that remains open to this day, in the form of Western gender norms among multiple other manifestations. In examining this structure, we must not forget about the indigenous system, the values and the agency that came before. There are many lessons to be learned in the rich history of gender and sex in African society. Notably, the value of considering human beings for their true authentic selves and not the labels society ascribes to them.