How the far-right infected UK politics during the last decade 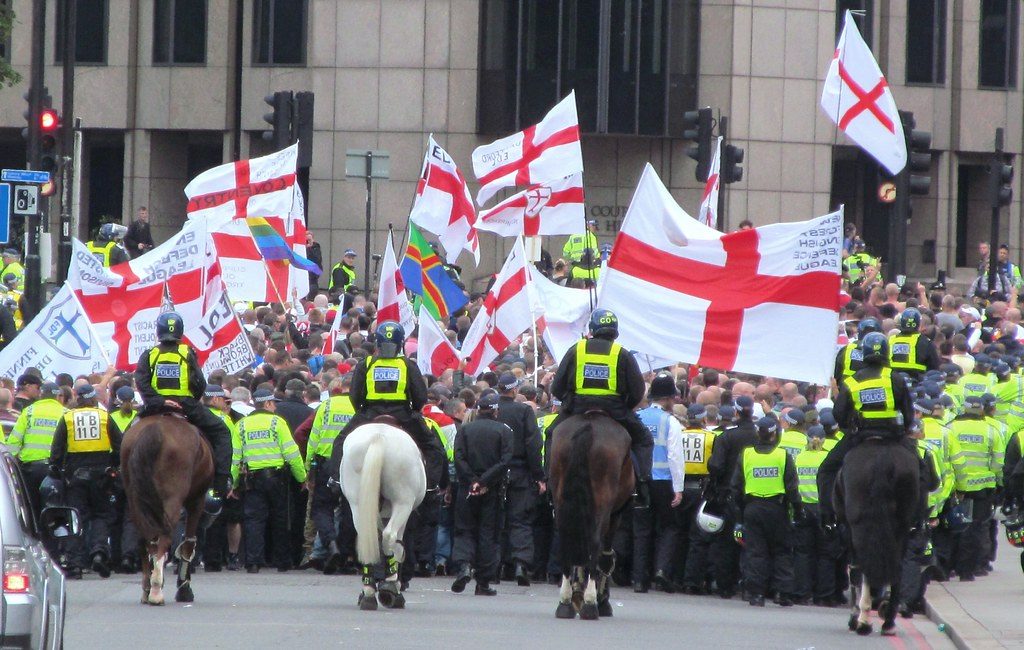 There’s a moment in vlogger Niko Omilana’s 2018 viral video ‘UNDERCOVER AS A RACIST FOR 24 HOURS’ that lays bare how baseless fascism is. Niko, a YouTube comedian known for prank videos, sneaks into an English Defence League (EDL) march and interviews a member, Hannah. She claims that immigrants are “taking our jobs” as part of her rant. Niko fires back “And they took your teeth too,” shutting down her groundless argument. It’s a funny moment – at first. But then you remember that Hannah’s views are real and dangerous, and the clip becomes a crucial insight into the deeply-rooted mindset of the far-right during the 2010s.

Far-right movements and parties in this past decade gained popularity around the mid-2010s by weaponising a rhetoric that promotes homogenous nationalism and excludes minorities. Dr Joe Mulhall, Senior Researcher at anti-fascist organisation HOPE Not Hate, points out that the far-right are always seeking out an “Other” they can stoke fear against in order to legitimise their existence in mainstream politics.

While this isn’t a new phenomenon – persecution of minorities has occurred in the UK since humans first settled here – the rise of the far-right in the 2010s saw what Rosie Carter, Senior Policy Officer of HOPE Not Hate, calls a “shift from biological racism”. Instead, groups like the EDL focus on creating an “anti-PC culture,” she says, with a particular focus on “an anti-Muslim sentiment”.

UK far-right groups in the 2010s have aggressively utilised the idea of the “Other” through condemning immigration and multiculturalism. They combined these with a potent strain of Islamophobia. This proved a marked departure from previous far-right groups of the 20th century, like the anti-Semitic British Union of Fascists that rose to prominence in the 1930s, and the National Front which adovcated for white separatism in the 1960s and 1970s.

The EDL and their “struggle against global Islamification” demonstrates this trend. Founded by Kevin Carroll and Stephen Yaxley-Lennon (aka Tommy Robinson), they emerged during 2009 as a counter-response to an extremist Muslim protest at an army parade. Britain First, another far-right group with a predominant anti-Muslim agenda, also leveraged their profile over the last decade by attacking Islam and immigration as “a danger to the British people”. Their tactics are physically intrusive, as showcased by their 2014 mosque invasions in which they would storm inside to hand out Bibles to worshippers. But it was social media that played a far bigger part in amplifying the voice and presence of these hate groups that would have been confined to the fringes in eras where the power of the internet couldn’t be harnessed.

The 2010s also saw a number of short-lived right-wing political parties who were briefly loud players in UK politics, despite not actually achieving any ground in traditional political sites. The British National Party gained two seats in the 2008 European Parliament elections but were removed from the political party register in 2016.

Meanwhile, the UK Independence Party (UKIP) flourished under Nigel Farage from 2015 to 2016 but won no seats in the 2017 general election, while Farage’s next project, The Brexit Party, also failed to send any MPs to Parliament in the 2019 election – despite “getting Brexit done” being the number one reason voters said they voted for the ultimately victorious Conservative party. And yet the pressure from parties like UKIP pushed the Tories into embracing unbridled nationalist populism under Boris Johnson – which won him a huge majority.

Far-right populist parties are also gradually rising to power across the rest of Europe by establishing immigrants and minorities as “a scapegoat for economic hardship” in the wake of the 2008 recession, and “detrimental to European culture.” A recent example is Vox in Spain, who used the increase in African migrants as a xenophobic political tool to achieve electoral success.

Journalist Owen Jones has accused mainstream media of helping to fuel the rise of the far-right which has been backed-up by Neil Basu, Assistant Commissioner at Metropolitan Police. Far-right terror attacks have increased in frequency, with arrests linked to right-wing terrorism in Europe in 2019 increasing for the third year in a row. We also cannot forget the tragic death of MP Jo Cox where her murderer screamed “Britain first!” as he attacked. A UNHCR report analysing press coverage of the 2015 EU migrant crisis found that the “right-wing press”, like the Daily Mail and The Sun, “in the United Kingdom expressed a hostility towards refugees and migrants which was unique”.

“The general election results have emboldened the far-right further; Britain First leaders say over 5,000 of their members have joined the Conservatives since 12 December”

The 2010s have seen the UK’s most-read newspaper publish columnists who liken migrants to “cockroaches,”. The run-up to the 2016 EU Referendum was another period where news coverage seemed to blame migrants for “putting unsustainable pressure on public services”. The influence of this xenophobic scrutiny is apparent; when the UK voted to leave the EU, “taking control of UK borders” was the second most popular reason cited by those who voted for Brexit. After the vote, 94,000 hate crimes were recorded by the police in 2017/2018, an increase of 17%.

The 2019 UK general election results have emboldened the far-right further, with Britain First leaders saying over 5,000 of their members joined the Conservatives since 12 December. HOPE Not Hate interpret these endorsements as “desperate attention-seeking and a rather pathetic attempt at glory hunting” and Conservative MPs like James Cleverly have stated that the party will reject such members. But Kimberly McIntosh, Senior Policy Officer for Runnymede Trust (and a gal-dem columnist), told me it is “worrying that the campaign rhetoric, and past comments made by Prime Minister Boris Johnson about minorities, have resonated with far-right leaders enough to secure their endorsement”.

Occasionally, there has been minor justice. Tommy Robinson is banned from most social media. Britain First’s leaders were jailed in March 2018 for hate crimes. Katie Hopkins lost a libel case against writer Jack Monroe and was forced to sell her £1 million home. But those are individuals and the sentiments they’ve helped fuel are a much bigger monster to vanquish.

Though some believe that far-right parties are already on the decline, the outlook post-election is bleak. Following their victory, the Conservatives have already dropped a promised inquiry into Islamophobia within the party and their legacy from the last decade includes “Go Home” vans, the Grenfell deaths, the Windrush scandal, or the support for Viktor Orbán. Hate crimes are occuring more frequently; the last days of 2019 were marked by anti-semitic graffiti daubed across north London, while New Year’s Day saw a Brixton mosque being spray painted with anti-Islamic slogans.

“Look to history as well, to the movements that have successfully opposed and quelled the far-right in the past”

What comes next for those who want to resist? With parliamentary opposition to this new right wing government wiped out, we must look to the grassroots, to examples like the Stop Trump movement and Miqdaad Versi’s polite mission since 2015 to confront the Islamophobia of the British press by lodging complaints, to more tongue-in-cheek instances of dousing fascist personalities in milkshakes. Look to history as well, to the movements that have successfully opposed and quelled the far-right in the past, like the 1977 Battle of Lewisham, when National Front marchers were faced with nearly 4,000 protestors.

Equally, don’t put yourself in danger. Resistance is not always active or physical – it can be writing for anti-fascist publications, volunteering with anti-hate groups or simply challenging poisonous ideas if you hear them expressed around you. If you also possess privilege which helps you escape abuse then use it to protect your more marginalised peers.

Form a strong sense of togetherness in communities to look out for each other, especially when divide and fear is spreading rapidly. The far-right strengthen their position by pitting the marginalised against each other – the recent election saw them attempt to stoke division between Jewish and Muslim communities. But we must stand together to overcome. The 2010s may have marked the rise of a new, poisonous breed of far-right ideology – but we can make the 2020s the story of its fall.