Following the election, we need to find solidarity, not more division 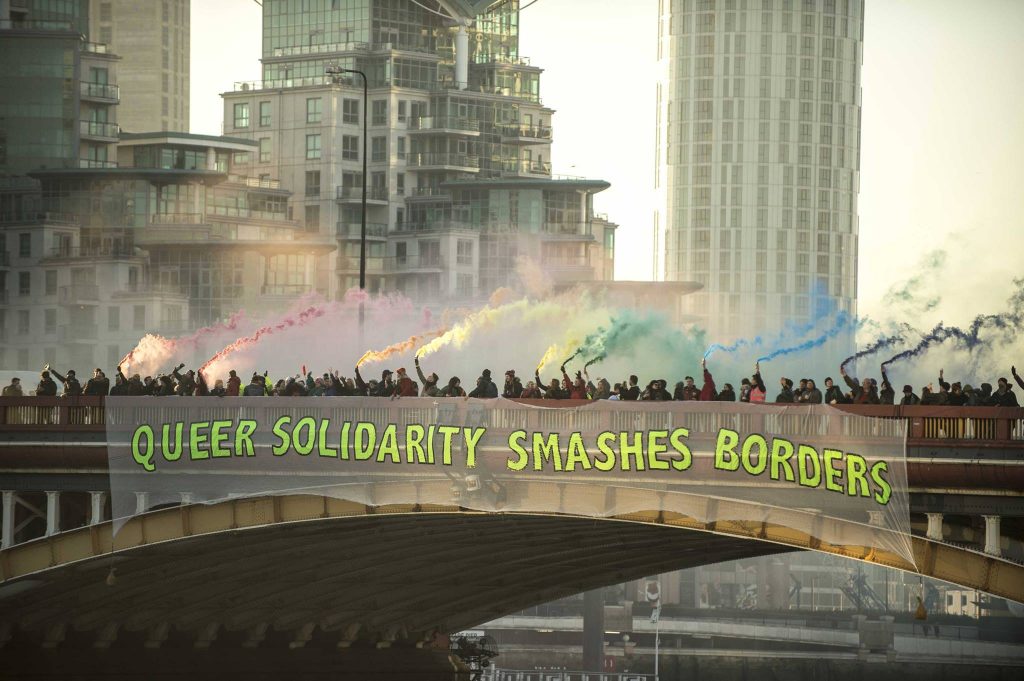 Photography via Lesbians and Gays Support the Migrants

Two days after the UK general election on 12 December, in which Labour suffered a heavy defeat at the hands of Boris Johnson’s Conservative party, a fringe group called “Blue Labour” reported a spike in Twitter followers. Anti-racist activists were quick to point out that the “cultural conservatism” promoted by Blue Labour is a thinly veiled euphemism for anti-migrant, anti-queer and anti-trans politics: Blue Labour’s website celebrates “the family” as “a fundamental social institution”, calls for restrictions on all but “skilled” immigration, and makes it clear that they have a binary conception of gender. David Goodhart, ex-Etonian pseudo-intellectual and prominent Blue Labour advocate, has been central in shaping media depictions of the UK as divided between a progressive, liberal and London-based “metropolitan elite”, whose fixation with issues like gay marriage, multiculturalism and open borders has “left behind” those “ordinary” (read “white”) people living in the UK’s smaller cities, towns and villages. The loss of long-held Labour seats in the North of England, North Wales and the Midlands has been positioned by many as proof of this hypothesis, that Labour must be racist to win seats with the working class.

To those of us working against racism and anti-migrant politics, attempting to pit working class people against and black, brown and queer people is an indefensible response to the election of Britain’s foremost bigot. The assumption that racism is the only way that Labour can win back these votes is overly simplistic and classist. It overlooks that it is possible to fall into more than one of these categories; and it also betrays the people of colour who not only consistently vote for Labour but who are directly affected by racist media rhetoric. Besides the fact that nobody does “cultural conservatism” better than, well, the Conservatives, in times of political crisis the left needs solidarity, not chauvinism, if we are to challenge the structures that oppress us.

“Attempting to pit working class people against and black, brown and queer people is an indefensible response to the election of Britain’s foremost bigot”

I know this as a part of Lesbians and Gays Support the Migrants (LGSMigrants), where we build on histories of solidarity within the labour movement. Our name is a reference to Lesbians and Gays Support the Miners, a group of queer activists who came together in 1984 to raise awareness and funds for striking miners and their communities, recognising that the struggle for gay and lesbian rights in a capitalist society is linked to the rights of workers. People of colour suffer much of the brunt of capitalist exploitation. People made outsiders by racialisation and xenophobia, like black, brown and Irish activists, have been leaders in the English labour movement since its beginnings two hundred years ago. Historically, but also under the current Conservative government, migrants are also othered, struggling against punitive border regimes, racist violence, and the worst excesses of austerity.

Queer liberation means liberation for everyone. LGSMigrants challenges homonationalism, which is this idea that queer liberation is incompatible with the rights of black and brown people. We use governments’ and companies’ attempts to “pinkwash”, or claim that they are LGBTQ-friendly, to demand rights for migrants. Queer identities intersect with all marginalised identities, including race, class, migration status and ability. We may each face different struggles in society, but those struggles are linked under structural oppressions, and are exacerbated by attempts to turn us against each other. It is only through solidarity that we can resist our oppression.

“We may each face different struggles in society, but those struggles are linked under structural oppressions, and are exacerbated by attempts to turn us against each other”

We know from the last 10 years that life for oppressed groups under this Tory government will be difficult; for many, it will be brutal. Whatever its cause, the loss of a strong left wing presence in parliament is devastating to those most affected by welfare cuts, hardening borders and the rise of the far right. We need to take the time to understand why we failed, and why voters in England and Wales elected a leader and a party whose main concern is with preserving power and privilege for the richest members of our society. However, if we give up on allyship between oppressed groups, then we only consolidate the Conservative victory: the right will not be threatened by a left that favours white people over people of colour, traditional families over queers, those with citizenship over migrants. Instead, we must build on the wave of activism that we have seen in the run-up to the election. Corbyn may have lost the election, but his vision of a Britain that is “diverse and united” must remain at the heart of a politics of the left that presents a substantive challenge to the white nationalism of the right. Resistance through solidarity is the only option we have.