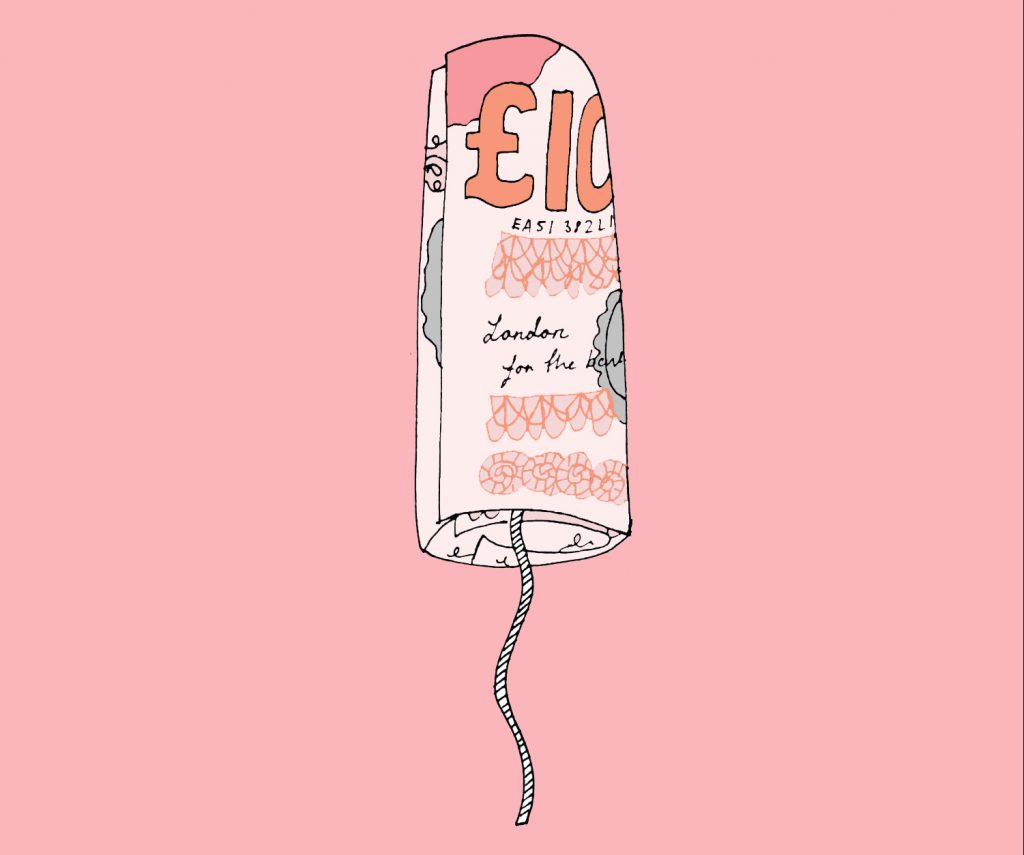 It was in April this year that I first heard the word “period poverty”. An article in a newspaper that described how children in the UK couldn’t afford to have a period caught my eye. Children were risking their health by making improvised sanitary products, such as taping socks stuffed with wads of tissue to their underwear, or tearing up old clothes. I was shocked.

Many young girls living in poverty avoid school when they have their period, missing up to a week at a time. As anyone who’s ever had a period will know, the embarrassment of being confronted with a giant, blood-soaked splotch on your uniform is not just beyond humiliating, it’s pretty much soul-destroying. I’ve sat in class on the months where my period is exceptionally heavy, wondering if my bleed has gone rogue, but imagine if you had to make a pad or tampon last all day, maybe even two? Imagine if all you had to absorb your flow was stolen tissue roll fashioned into a homemade pad. Now imagine how splintered your mind would feel as you struggle to concentrate on lessons, stressed, anxious, and perpetually plotting how you can be that last person to leave the classroom.

This is a reality for many girls whose families live in levels of acute poverty, and for whom menstrual protection is simply a luxury they can’t afford. The Joseph Rowntree Foundation revealed earlier this year that child poverty has not just reached a record high, it is set to soar. Equally alarmingly, food bank usage is rising year on year. The Trussell Trust has recorded a sharp spike in the number of emergency food parcels distributed in the past few months. When families are confronted with daily battles to feed their children and rely on the generosity of donations, one thing is clear: menstrual care falls to the bottom of the list of priorities.

Children who have their period have told me that they don’t even ask their parents for money to buy pads or tampons. They don’t want to add to their parents’ stress and feelings of inadequacy because they know there may not even be food for that night’s dinner. This is the bleak picture of Britain today, and the children I speak about are sometimes as young as ten.

Menstruation is not a choice, and menstrual care is definitely not a luxury. It’s a fundamental human right to have safe menstrual management. I’ve started a campaign called “#FreePeriods” to call on the government to provide free menstrual products to all children on free school meals in the UK. These children are from the lowest socioeconomic backgrounds, whose families are means-tested and already identified as financially-challenged.

Scotland is leading the way in providing universal access to menstrual products, and in countries such as Kenya and in Kerala, a state in Southern India, period protection is handed out to schoolgirls in a bid to keep them in school when they menstruate. The cost of funding similar schemes in the UK would be trivial, especially when compared to the monumental £35bn price tag on Trident (the UK’s nuclear warheads). Free access to period products is an investment in the future of young people, and provides an escape from the clutches of poverty and deprivation that can thwart the lives of future generations.

Over 84k people have added their name to the petition, and the cries for a change in policy are ringing louder and louder as the days pass.

This Wednesday 20 December, we will be gathering together in Richmond Terrace, opposite Downing Street, in a peaceful protest to let Theresa May’s government know that the time for action is now. We have a diverse range of accomplished and inspirational women lined up to speak, including Adwoa Aboah, Jess Phillips MP, Ayesha Hazarika, Suki Waterhouse and more. It’s going to be a powerful day, as we stand together, no matter what our race, age or gender, in our collective message that no child should miss school because they are menstruating.

So join us on Wednesday. Wear red, and bring a banner. We need to be a force that challenges this injustice and shakes the government into taking action, to give these children back what they’re entitled to; dignity, education and as far as possible, a carefree childhood. Please come and be a part of it.