Junglepussy on her acting debut as a no-nonsense breastaurant waitress 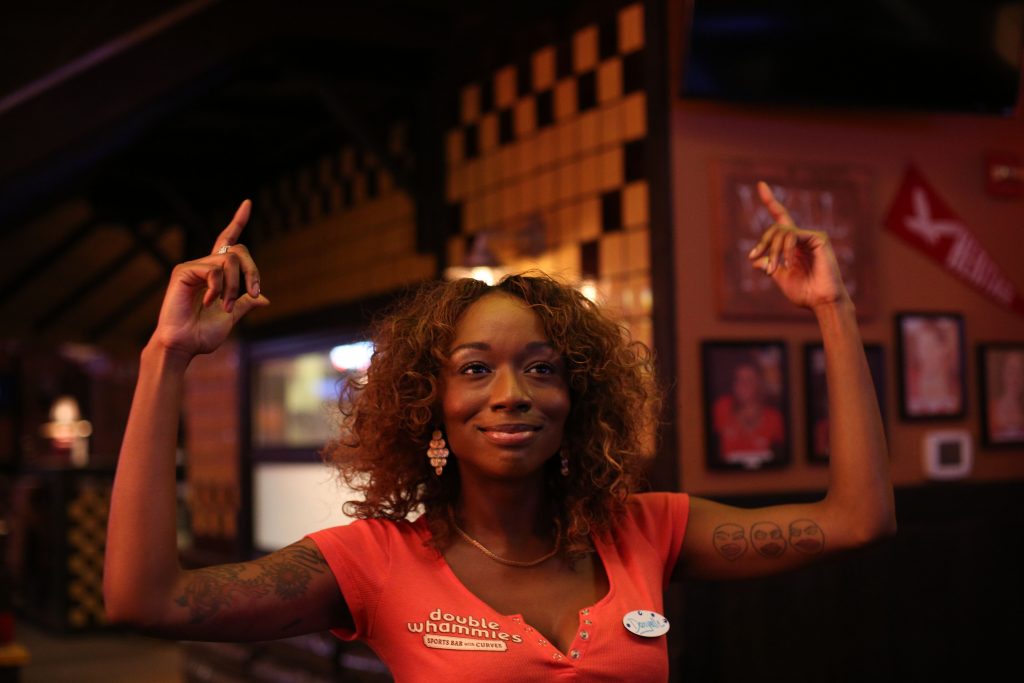 Support the Girls, the latest comedy from the godfather of mumblecore Andrew Bujalski, was already hailed as one of Barack Obama’s favourite films of the year back in 2018. The hyperreal, feminist indie flick follows Lisa, an optimistic general manager of Double Whammies, a rip off of popular breastaurant Hooters. Played by Regina Hall, she’s loved and respected by her employees for her can-do attitude, but this sunny disposition is tested on a hellish day that just keeps getting worse. Despite her own personal turmoil, throughout the film she looks out for the other young employees, meaning the film is not only a realistic portrayal of women’s pressures at work and at home, but a warming tale of the power of solidarity.

The film is also the acting debut for Shayna McHayle, better known as Junglepussy, one of America’s hottest on-the-rise rappers. We spoke about her transition into acting, what it was like working with a legend like Regina Hall, and how the music industry in many ways isn’t too dissimilar to the service industry.

When I speak with her over the phone, she’s refuelling with a snack. Multitasking is crucial when you have a busy schedule. “I just heated it up when you called and you know you can’t reheat it, or it gets too crusty,” she tells me while softly chewing on some bread. If you know anything about Junglepussy you’ll know she’s a say-it-how-it-is feminist, unafraid to talk about sexual pleasure, her blackness, and unapologetically screaming from the rooftops about self-love.

Music from the Junglepussy discography appears in the film, playing in a car in one of the opening scenes, something she said was “unbeknownst” to her. “I didn’t beg them to use my songs,” she explains. “They hit me up and ask to license a song, I was like ‘oh my gosh when will the blessings end?’ When Obama said it was his favourite movie of the year,” she pauses, “you heard Bling Bling?” And now I can’t help but think of the 44th president listening to no-nonsense lyrics like ‘fuck a wedding ring that ding a ling was just a fling bitch’’.

It’s these surreal moments that mean her current career trajectory is a far cry from Danyelle’s waitressing at the “sports bar with curves”. The closest she’s come is working in retail in New York, including H&M, Diesel and Patricia Field, the latter of which she was fired from before becoming a musician. “I worked at many jobs, I never worked at a restaurant, I’m not built for that – I can’t, I be forgetting people’s orders!”

“People don’t really care about artists, they just care about their music. It’s just like fuck your existence, people are so fickle, that’s some service industry shit to me if I’ve ever seen it”

But outside of being Junglepussy, Shayna has wanted to pursue a career in acting for some time. Now, she takes on the role of Danyelle, a mum providing for her son by working in the sports bar. It’s not always easy taking on your first acting role, however, in this case, her character was true to life. She isn’t afraid to call people out at work where only one black waitress is allowed to be on shift at a time.

“I wanted to take on the role because I felt like I, related to Danyelle,” she tells me. “My music is very outspoken. And she is very outspoken at her workplace, racial, social – I get it.” Danyelle is furious that there is only one black waitress is allowed to be on shift at a time. “Despite her working somewhere where she didn’t really care for the culture, she was still there because she had to be a responsible adult for her child. I’m always making sacrifices like that,” she adds. But unlike her character, who ends getting a promotion before sabotaging her own job, Shayna has stepped away from self-sabotage.

Although Support the Girls is her acting debut, the New Yorker has already dabbled in acting previously through her successful career as a musician. Junglepussy’s live shows are like watching theatre. I caught her at Primavera Festival, with no backing dancers and no band. She still had the undeniable presence that took the audience by the scruff of their neck and commanded their attention. “In a lot of my music videos, I’ve always acted to some extent,” she says.

She’s been known to take on other identities like Sean, Junglepussy’s boyfriend, in which Shayna gets in drag, with a do-rag and painted facial hair to match. But it was still a career path Junglepussy didn’t feel comfortable publicising. “I just said out loud among my friends, I didn’t even say it on the internet. I was just like, I can act, I’m about to be an actor. Just talking shit,” she says before correcting herself. Quickly she remembers her obvious capability which allowed her to be a part of such a highly acclaimed film. “It’s not shit.”

There were some stark differences though. Unlike her other creative pursuits, she wasn’t in the driving seat for Support the Girls. “It’s somebody else’s vision so I feel a little less pressure, when it’s my vision, I’m like ‘no!’” She screams then laughs. “I guess with the music industry, I don’t know why I always feel so much more responsible. For some reason, when you’re a musician it’s so godlike.” Junglepussy is well aware that there are some “real hardcore actors” aren’t fans of the musicians who act. “But, it’s a new day! We finessing!”

“When Obama said it was his favourite movie of the year, I couldn’t help but think of the 44th president listening to no-nonsense lyrics like “fuck a wedding ring that ding a ling was just a fling bitch”

Undoubtedly, one of the aspects that makes Support the Girls so convincing is Regina Hall’s performance, a role that’s different from her usual work and awarded her best actress in the New York Film Critics Circle – the first African American to receive the award. The two characters bounce off each other beautifully, with Lisa being a work-mum figure to Danyelle. “I feel like I grew up with her, grew up watching her,” Junglepussy’s pure admiration of Regina is palpable. “It feels unreal to me, I don’t know I try to not be too stunned by it.”

Despite her tremendous success, Junglepussy still has an air of humility as she has her “pinch me” moments. “I always feel like damn why me? The universe is like ‘no, no I have other plans for you.”

As she establishes herself as an inimitable voice in entertainment it’s clear that this is by no means a one-off.  She wants to be in animations, star in “sexual, provocative roles” as well as in horror films, and if her role as Danyelle is anything to go by, a long-acting career awaits. And, she’s not waiting for permission.

“I’m just not about to have the world or the industry make me feel like I have to wait … I might die, I gotta do it now.”