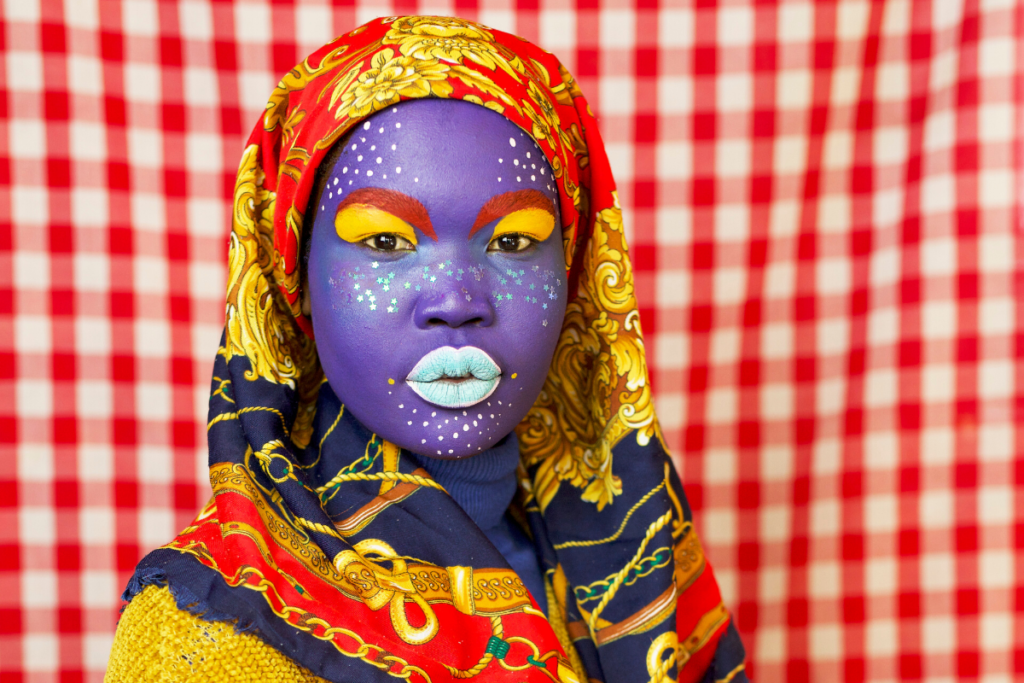 The Melbourne-based afro-futurist’s visual motto is that when you feel like an “alien” because you’ve been othered, you have the right to imagine yourself as an intergalactic pageant winner.

While Atong Atem is always serving sci-fi otherworldly realness in her regal self-portraits, in a personal sense she’s just looking for ways to feel at home. In fact, when we eventually speak to each other over the phone it’s the middle of the night and the 29-year-old is resting by enjoying a puzzle – a relaxing reward after moving house. She’d made the decision to move to a new spot in Melbourne after her therapist advised that with global upheaval, anxiety and uncertainty now was probably the best time to get more drastic life changes out the way.

Ever since pursuing her craft via an art school course, she’s been finding ways to get comfortable in the uncomfortable. “I had idealised art school,” she explains. “It sounded like a hippy utopia but the reality is that like any institution will reflect the place in which it exists, and Australia is a presently colonised place.” Atong was no stranger to creative circles. She grew up in an expressive family alongside other photographers, her mother “an incredible artist” and her journalist father who writes “beautifully”. But as a South Sudanese refugee, she didn’t identify with constant reflections of either contemporary white Australia or the European masters in the curriculum.

“It was a double-edged sword because that meant I could define my own outlook. The country is so young and the history of art here and black African migration is so recent that I could make a new curriculum [and create a more] personal relationship to art because I felt so excluded,” she explains. “It was freeing in its own way.” She spent time devising her own path, looking at the pre-existing history of black and African art rather than trying to fit into a world that she didn’t relate to.

Hers was one where Octavia Butler, Malick Sidibe and London-based photographer Ibrahim Kamara were her teachers as they too created work uninterested by the white expectations of black expression. That’s why Atong’s ‘studio series‘, showing black women adorned with jewellery and traditional clothing, and a lot of her other works tackle this dynamic head-on. Each of them commenting in some way on the history of colonialism or the subverting the colonial gaze entirely. Her work has since been shown at MUMA Monash, Gertrude Contemporary, Australian Centre for Contemporary Art and Internationally at Red Hook Labs in New York, Vogue Fashion Fair in Milan and Unseen Amsterdam art fair.

Escaping the colonial gaze which has dominated planet earth takes intergalactic ambition and playful innovation. “Afrofuturism resonates because black people are constantly searching for space to just be, and that happens to be the future,” she explains. Artistically it’s easier to present blackness as free in a fictionalised future unburdened by all the complications of the past. “Black science fiction is an interesting lens to approach my work because by virtue of being fiction it sits outside of the history of colonialism. It’s a free space to do whatever and that’s really inspiring.”

That’s why her shoots feel more like playing dress-up than a planned protest. Atong says her best work always happens off-the-cuff as it’s lacking in self-awareness. She often starts by experimenting with clothes from her wardrobes, beautiful backdrops and intricate face paint when she’s got time on her hands at home. She likes to reference space, sci-fi and scenes from films made in the 1960s (“anything Barbara Streisand has been in”) as well as finding ways to pay homage to random black characters in old Hollywood films like Welcome to the Dollhouse. Then comes the paint which she describes as “a security blanket” so she can feel less self-conscious about the “hectic” and politically-charged captions about anti-blackness that sometimes accompany the images on Instagram.

“Afrofuturism resonates because black people are constantly searching for space to just be, and that happens to be the future”

Despite the fact she’s consciously diverting from what people expect from dark-skinned portraiture, she doesn’t feel like it’s her job to right all the wrongs of the past with her portfolio (“That’s a heck of a lot of pressure. I’m not Neo and this is not the Matrix”). Taking her brush she mindfully responds to her own facial features, looking at the way the lights hit her cheekbones and therapeutically covering herself in a bright colour palette until she feels placated. And if she’s happy with the end result? “I’m a young person in the year 2020 so I put it on Instagram.”

Despite the fact she often works alone, Atong is keen to lift up the black art community that inspires her in Melbourne, groups like Still Nomads who pushed her creatively and made her feel part of a movement. In the Australian art scene, there is a tendency (similar to London) for gatekeepers to tokenise minority voices. “When they project uniqueness onto me it’s symptomatic of this dissociation from reality when people experience someone other than themselves,” Atong says, critiquing the one-in-one-out policy for prominent black women creatives. “If I’m an activist in any capacity, it’s trying to convince the wider population that there is space for more than one of A, B, C or D.”

Back in gal-dem’s early days, Atong penned a personal essay that dissected what it was like to inhabit “the very black body”. In it, she talks about how tiresome it is to be subjected to reductive views about what type of woman you are based on your skin, or what type of person her lovers were by proxy of being romantically connected to her black body. I ask whether, given how we’ve been mistreated and misrepresented historically, it was intentional to create a reality where dark skin women are depicted alone, dripping in opulence.

“I think I was creating a visual archive for people who relate to my image. When people see the image of a black, dark skinned woman there is a visual language that already exists to assign meaning to that image. You know like Naomi Campbell the sexy supermodel was made to be animalistic in a lot of imagery, or it’s the motherly black woman, or kind of hotep stuff,” she explains. But in taking control of all aspects of her image as both the photographer and the subject she can use the portraits to illustrate the more alienating aspects of being “super dark skinned”.

“I wanted to look like a really sexy goddess alien from Venus who just won Miss Universe. I wanted to take a little bit of power away from the image that the world has projected onto me for looking away what I do by fucking with that pre-existing language,” she continues before laughing. “More than anything I just really enjoy painting my face and putting gems on my face,” she laughs.

Me, Myself and I is a week-long celebration of self-portrait photography focusing on the power of creating art alone.

How to shoot your own thirst traps