Oscar winner Regina King: ‘One day Beale Street will be studied in colleges’ 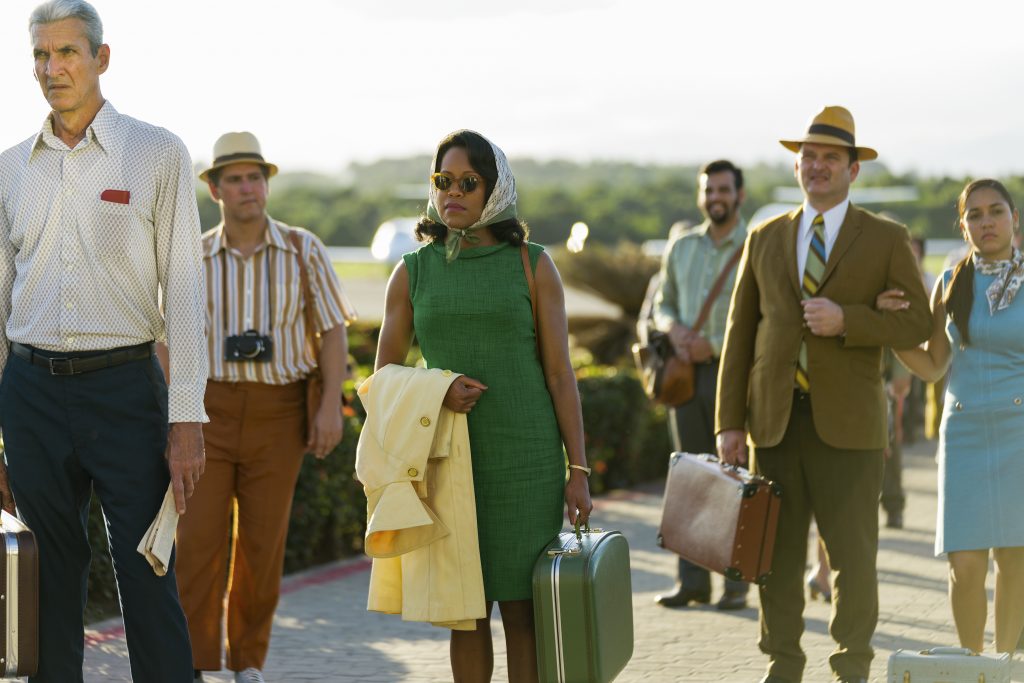 It’s glaringly obvious why Regina King won the Oscar for best supporting actress for her portrayal of Sharon Rivers, the mother of protagonist Tish Rivers in If Beale Street Could Talk. Sharon is a force – both strong and nurturing.

As Regina describes, she is a woman “motivated by love” who many of us can relate to. “When I read the book, and when I read the script, I was totally seeing my mother and my grandmother in Sharon,” Regina tells me with a smile. “They were those type of women that people always want to be around. It’s tapping into childhood feelings that still exist even as an adult that my mother and grandmother have been a part of.” It’s that sense of nostalgia and relatability that makes Regina’s depiction of Sharon so memorable.

In 2016, we fell deeply in love with Moonlight and director Barry Jenkins’ delicate approach to storytelling. Now Jenkins is back with his new film If Beale Street Could Talk, based on the book by the father of modern black American literature, James Baldwin. The story centres on a young black couple in Harlem in the 70s – falling in love whilst navigating systematic racism and an unjust prison system. Beale Street is somehow both heartbreaking and wonderfully heartwarming – Jenkins depicts blackness in an enchanting manner. Through the rich cinematography, superb cast and a powerful score, If Beale Street Could Talk is nothing short of a classic.

Astonishingly, despite a huge amount of recognition, Beale Street was snubbed for a nomination for best picture at this year’s Oscars. “I try not to get in my feelings about that,” Regina laughs. She is well known for her roles in Poetic Justice, Netflix drama Seven Seconds and has won three Emmys. “But sometimes I just can’t help it – I do.” I ask her if she can see any real change happening in the film industry. “Hollywood is trying,” she replies. “I think we see it more in television than we do in film. The stories on television are more reflective of the world than the film by the numbers.” She clarifies: “Not saying that film doesn’t, but not as often and it’s always a smaller film like a Beale Street.”

Regina is also just one of 23 black women to ever have been nominated for best supporting actress. To put that into perspective, five people have been nominated in this category every year for 91 years. “I did not know that number… It’s unfortunate,” she says. “It’s one of those bittersweet things. You definitely accept the honour and recognise being recognised for something that you are so proud of – this film is a true piece of art.” She understands her nomination is bigger than her and something she believes symbolises Beale Street’s greatness. “I am representative for this lovely piece of art that was birthed by James Baldwin and parented by Barry Jenkins.”

Along with Sharon Rivers, one of the most rewarding aspects of Beale Street is the varied and multifaceted portrayals of blackness. The Rivers family, for example, are happy, united and full of love. As Regina puts it, they “represent what so many of us know but we don’t get to see”. Like me, Regina also comes from a loving black home. “You know that that exists. Look at us here,” she says.

There is a specific scene where young Tish Rivers tells her mother she’s pregnant. Naturally, the audience expects her to receive a gargantuan scolding. Sadly, if Hollywood has taught us anything it is that black teen pregnancies are never good. But they don’t get angry. “That was the thing that I felt was so fantastic about Joe and Sharon Rivers,” Regina says. “They created a space where there was no shame. So their daughters can thrive and speak their mind and be thinkers.”

The nuances in the characters created by Baldwin and delivered by these meticulous actors make the film sing. “I just thought it was great that Baldwin was so smart with painting these little pictures within the big picture,” Regina says. She also tells me some of the believability of the characters on screen is down to real bonding offset as well as giving their characters backstories. “Column [Domingo] and I would talk about who we thought Sharon and Joe were before they met, how young they were when they had Tish or Ernestine. We were the Tish and Fonny before Tish and Fonny were,” she says. “Just little things like that.”

Although Beale Street is an epic love story on a Grecian scale, the film simultaneously addresses systematic racism and the prison system in America during the 70s. Sadly, Regina, who was born in 1971, doesn’t believe much has changed since then. “It’s more in your face and it’s still happening,” she says. She explains how her co-star Stephen James (who plays Fonny) drew inspiration from the heart-wrenching case of Kalief Browder, which happened less than a decade ago.

“Although Beale Street is an epic love story on a Grecian scale, the film simultaneously addresses systematic racism and the prison system in America”

“He was a young man in New York that was wrongfully accused and spent 33 months in Rikers Island, and he was finally exonerated. He ended up killing himself with all that he experienced in that system.” Whilst Jenkins hazy hue’s and orchestral soundscape feel like we’re watching a fairytale, the racism happening in the story is very much real and it’s still occurring today.

“We hear little snippets of Kalief Browder, or whoever that young man is on the news, and he’s just looked at as a criminal. And the beautiful thing that Barry was able to do was show humanity,” she explains. “Put an actual real face, someone’s son, someone’s father, someone’s fiancé – someone with dreams.” Jenkins delivers a humanising portrayal of the real-life effects of a rigged prison system.

Whilst Beale Street specifically explores the black American experience, Regina believes it’s a film for everyone. “It is an American story,” she says, “but love is universal.” At its crux, Beale Street is indeed a story about love and family: themes we can all relate to. “I do believe eventually it will be one of those films that will be studied in colleges and it will always have a life, it will be like Boyz N The Hood.” She says. “I feel like Beale Street will live on.”

If Beale Street Could Talk is a masterpiece, it’s a journey, and the pure haunting beauty of the story combined with the cinematography will stay with you long after you leave the cinema. And Regina deserves every ounce of recognition for her role as Sharon King: a true highlight in her spectacular career.