Screw you, pay me: young & struggling in gentrified London 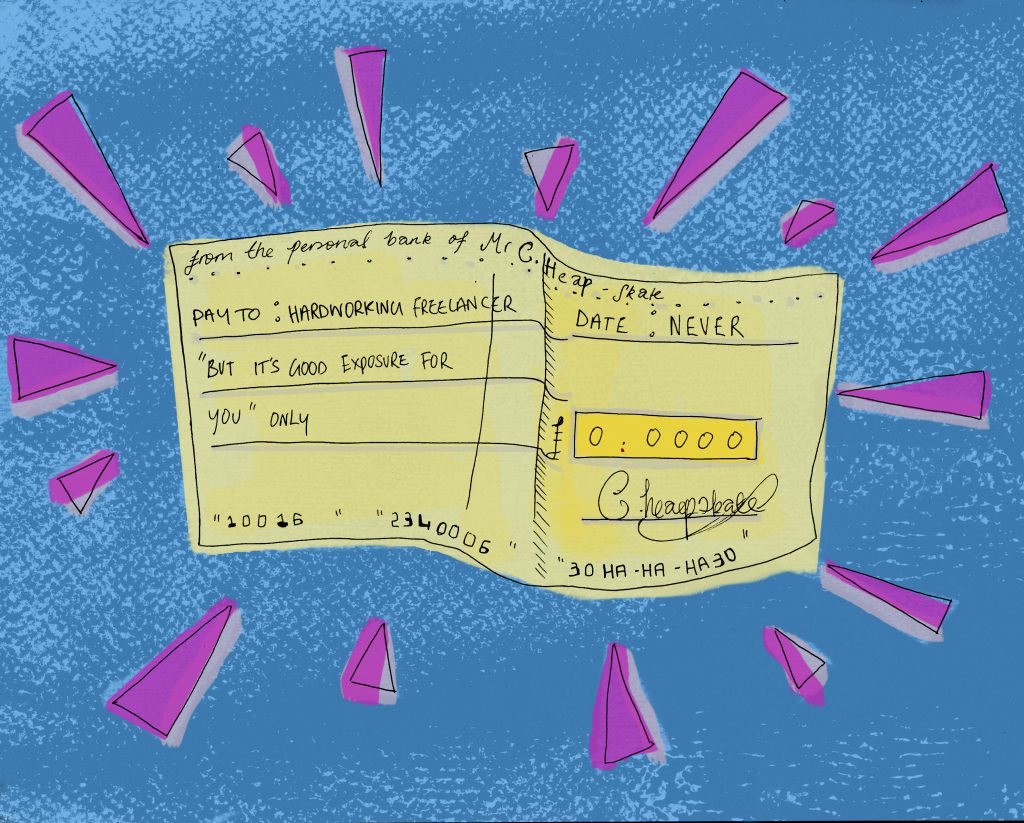 It’s not exactly breaking news that there are thousands of young people in London working for little or no money. At the time of writing this I’m almost 25 and have been in and out of work since the age of 17. My CV currently states that I’ve had 13 jobs. Out of those, five were minimum wage (or a few pence above), two were cash in hand & below minimum wage, in another two I was pretty much on a freelance wage getting money here and there, and four were unpaid.

These do not include the numerous hours of completely independent freelance work I have done over the years, mostly again, unpaid – people need to take note that the “free” in “freelance” is not literal! I should probably mention that in this time frame I have also claimed benefits, paid taxes and national insurance, completed a degree, and begun working on my masters, so I got a little bit of money out of the system, but mostly I’m horrifically in debt to it. When I add the durations of all of my unpaid roles together, I have worked unpaid for 18 months.

As you might be able to guess, I’m pretty sick of it. Even though I am grateful for the experience I have gained, I still believe that myself and many other young people are taken advantage of and mistreated. Thinking back to why I agreed to do the jobs that I have done, I’ve either been desperate for money or desperate for experience, and in some unpaid cases I genuinely believed that I was contributing by volunteering.

“I wonder why “money” and “experience” in terms of work for young people are somehow irreconcilable.”

I wonder why “money” and “experience” in terms of work for young people are somehow irreconcilable. Why is it so absurd to imagine a world where we could get both of these things from one role? I know that apprenticeships exist, but it’s as if employers don’t, or at least, they pretend that they’re some kind of myth in order to rinse people for free. Additionally, many young people from London simply cannot afford to take unpaid work. They need money to cover their expenses and even support their families, leading them to either take up a second paid job, or miss out on gaining relevant experience, which I believe contributes to the entire employment system in this country being based on privilege.

Secondly, what the fuck am I contributing to? I’ve never worked for a charity in my life, so how is my volunteering helping anybody except my employer save money? And what do they need to save money for? Need I remind you that this is the first world? We belong to the 20 per cent of earth’s population that holds 80 per cent of its wealth (Held & McGrew 2002), literally because western society has – to put it nicely – profited hugely from completely taking advantage of other people and their resources. Maybe I’ve missed something here, maybe it’s some unspoken part of western tradition to take everything for yourself and leave nothing for the majority of people who actually build, run and make things what they are. Oh yeah, hold up – that’s called capitalism, and its been going on for generations.

I can tell you now that most of the people I’ve worked for, for free, have plenty of money. They can pay bills, rent or own property, eat fancy food, buy themselves expensive clothes and even, spoiler alert; start their own businesses where they pay staff little or nothing, under the guise of gaining valuable experience and also possibly a few perks here and there which provide a taste of their unnecessary, usually unattainable lifestyles. They somehow manage to keep you keen and loyal even though they will never respect or value you enough to put you on the damn payroll or give you a secure London-standard living wage because, why on earth would they give you the money they could spend on themselves when other people will work for nothing?

“This is especially prominent in the creative and media industries, where people of colour fight every day for equal rights and humane representation”

And let’s just be real for a second here, these people are mostly gentrifiers. You only have to look at east London, and now also parts of south for proof of the fact that a lot of these people aren’t even from the ends. Which is funny because most of the time their start-ups are somehow related to or inspired by culture that originates from people like us, that is, people of colour who come from London, who have brought our family heritages to the west and embraced one another’s differences, creating our own new forms of identity and expression. This is especially prominent in the creative and media industries, where people of colour fight every day for equal rights and humane representation in order to make a precious and constructive difference to society.

Our cultures are appropriated into the mainstream without recognition, with a continued belittling of origins, and with total denial of the very serious realities that come with having identities like ours. The companies that do this present themselves as allies to our causes but when you look a little closer it’s not hard to realise that they’re basically only here to get involved with the fun stuff so that they can profit off it. The hard part of being like us isn’t accessible or universal enough for them, so instead of acknowledging or attempting to assist it in any real, tangible way, they ignore and silence it, which is ultimately much more damaging than if they would have just left us alone in the first place. What’s funny is, our culture and heritage existed years before any of these people had a clue. There wasn’t a point where we needed them to be able to create, yet here they are taking advantage. If they really wanted to support us as human beings, they would contribute, not the other way around.

“Every day I worry about what will happen in my future, because I feel like there is absolutely no security for people like me.”

And this, in fact, is what gets me the most. Every day I worry about what will happen in my future, because I feel like there is absolutely no security for people like me. Rents increase all the time and estate agents in my area are celebrating because they sold a house on my road for a record-breaking price, while locals are being thrown out of their homes and forced to move away from the areas they grew up in because they are simply not privileged enough to be there anymore. Between that, the disgusting amount of student debt my generation has been forced to take on by the government, and the fact that nobody wants to pay us to do purposeful work, it is hardly surprising that so many of us are feeling negative, hopeless, run-down and even have problems with our mental health. While we’re here, I may as well also mention the added struggles of being a person of colour, a woman, LGBTQ+, muslim or any other marginalised identity in the modern workplace.

One unpaid role is supposed to supply you with the training, knowledge and experience for eventual secure employment and, most importantly, a future. We do not want another unpaid role at another start up by another gentrifier, who wants to take advantage of your desperation and never take you seriously enough to pay you in actual real money that you might be able to save. Even after gaining all of this experience, there’s still a sense of that anxiety we might never be good enough to simply live our lives in a meaningful way under capitalism. Young people are still treated as interchangeable and worthless by these kinds of employers who, despite making out that they are our saviours because they give us opportunities, do not seem to genuinely appreciate how much potential and love we really have for what we do, or how much more they could get out of us if we were offered a real chance.

This is why I have made the decision to never accept this kind of work again, so unless it’s for a charity or a 100 percent legitimate unfunded DIY cause, all I have to say is: screw you, pay me.