The cast of Noughts + Crosses on reimagining Africa as a coloniser

Malorie Blackman’s classic is rebooted to show a vision of Britain as the underdog rather than the aggressor. But are audiences set to split over whether its subversive or antagonistic? 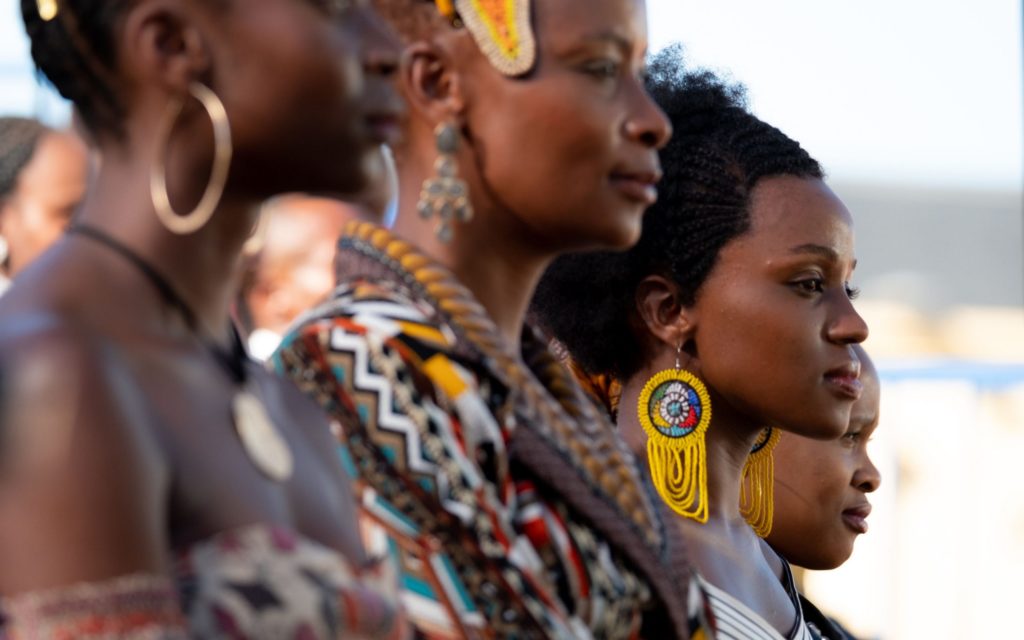 The BBC’s TV adaptation of Malorie Blackman’s Noughts + Crosses differs from other dystopian modern classics. Rather than leave issues of race unaccounted for, the acknowledgement of racism underpins the entire show. Noughts + Crosses depicts how the world would look if Africa (named Aprica to throw you off the scent) colonised Britain (named Albion). Modern Albion is a deeply hierarchical society governed by a structure in which Crosses (black people) are the ruling elite, with Noughts (white people) under their control. Dubbed as a story of “race reversal”, this alternative universe explores how the world would look if black people held power and privilege.

Unsurprisingly, the initial response amongst critics has been divided, with some calling Malorie an “anti-white racist”, while others laud the series as necessary as it sparks critical thought around racism and the lingering impact of imperialism. Newcomer Masali Baduza from East London, South Africa, plays Sephy, the protagonist of the series. I manage to pin her down after a busy day full of press events. She giggles as I meet her, exclaiming, “today has been a lot!”

We meet in an East London (England) cafe where she tells me she feels blessed to star in Noughts + Crosses as her TV debut. With a big smile on her face, she speaks about what drew her to the role, “I have never read a script where the lead was a young black, privileged, educated girl, and the world was for her, and made to work around her.” Midway through our conversation, we hear a bellowing “Masali!” and standing by the entrance is Koby Adom, who directed the final three episodes of season one, repping his London Film School fleece. After a friendly embrace, the two sit down, and we proceed to chat about how Noughts + Crosses makes history by creating a vision of distorted depiction of ours.

The series opens with a backstory that details the role colonialism played in constructing the current relations between the Noughts and the Crosses. In Albion, this overrepresentation of African culture serves a tool for the supremacy of the Crosses; the oppression of Noughts and the privileging of African culture go hand in hand. The same way in which whiteness is so invisible that it is treated as the norm in our society, “Africanness” is constructed in Noughts + Crosses in order to position Nought culture as the “Other”. Although Noughts + Crosses provides the representation that the black community needs on TV, is it worth it if it’s shown within the context of oppression?

Koby tells me that developing the concept of Africa (albeit a fictionalised version) as a coloniser was a continuous and self-reflexive process. “It was a case of us taking our lived reality and turning it on its head. It was like therapy.” When watching the series, we are confronted with the reality that the social relations that permeate throughout British civilisation are built with the same colonial logic present in Albion. Issues of police brutality, the right-wing Cross-controlled press, and lack of Noughts in power all echo similar issues experienced in the West. Through this “race reversal”, the audience witnesses how colonial legacies continue to shape society. This is why Masali says: “It’s the perfect time to make a show like this. Black people have always known these issues, but after watching this show, you can’t really say you don’t know anymore.”

“As a black woman watching the show, I thought African culture being the standard of beauty was wonderful, but it is important to remember that it is still an image of supremacy rather than equality”

Few British TV series centre African music, style and vernacular. Various elements of African society are normalised in Noughts + Crosses, from the African patterns present on most of the character’s outfits to the statue of an African woman that sits along the River Thames. Masali says this representation was important to her as an actress. “Walking on set every day did not feel normal, because everything was so unapologetically African. The attention to detail meant that I felt like I was stepping into a different world every day”.

Seeing the African way of life upgraded to a privileged status on Noughts + Crosses initially felt empowering. It was heartwarming seeing the Afro put on a pedestal, a sentiment shared by Masali. “Making Sephy, the protagonist of the show, wear an afro wig rather than a straight wig, that was huge! ” she says. “There was no straight hair in the world that Malorie created, because in this world, African culture is the standard of beauty”. As a black woman watching the show, I thought that this was beautiful. However, it is important to remember that it is still an image of supremacy rather than equality.

Actually throughout I struggled to remind myself that the black characters in the Noughts + Crosses universe are indeed the oppressors. I naturally rooted for Sephy, despite knowing that her family upholds a despotic system. “Getting to tap into the mind of the oppressor was a learning, albeit a conflicting, experience. It helped me understand why these privileged folk don’t help someone they see struggling. If the world is for you, and everything is working for you, why would you venture out and help others?” says Masali. Her comment made me think about how easy it is to sympathise with those who look like you. “I’m not saying what they’re doing is right, but I understand,” she explains.

I explain my inner turmoil while she nods in agreement. “That’s what makes the show so interesting because the race roles are reversed, but the world looks identical to the one you are living in today,” she says. I was troubled by the extent to which my sympathy extended towards Sephy. In a scene in the first episode, Sephy and her Nought friend Callum – who later becomes her lover – are faced by a group of Noughts, and in a fit of rage, Sephy calls one of them a “Blanker” (Albion’s version of the n-word). Callum initially takes offence to Sephy’s remark, only for him to forgive her in the episode’s conclusion.

“Because the race roles are reversed, it prompts us to have these conversations, like ‘why do I want Callum to forgive Sephy for basically saying the n-word?’,” she says. After a brief pause, Masali mumbles to me, “The show makes you think a lot. It’s not an easy watch at all”. Overall the biggest challenge of the show is depicting and explaining racism for an audience who is new to seeing themselves truly oppressed. As Masali says, “you can never really explain racism as a black person. By having conversations such as these, it gives white people a way into understanding what our lived experiences are”.

The project is a story about race of course, but above all it’s about love too. “The show is about exploration, bringing people from different situations, and using their varying experiences to tell a story that anyone can resonate with”. This idea of bringing together fundamentally different people manifests itself in the romance between Sephy and Callum, the focal point of the series. Before watching Noughts + Crosses, I was nervous to see how the series would approach the interracial love story trope. For many, it is believed that this narrative has been played out, used as an oversimplified solution to stories that highlight racial adversity. At the heart of it, it’s a love story. It’s a very universal theme. Love conquers all. That’s the message.”

“Walking on set every day did not feel normal, because everything was so unapologetically African”

Love does not exist in a vacuum. Unfortunately, who you love, and how you love, is a process that must be situated within its context. Embedded within discourses surrounding love are racialised undertones: who is deemed desirable and worthy of love normally mirrors racial hierarchies. As well as this, we know that the existence of interracial couples have not solved racism and racism can exist within romantic relationships. So is a “love conquers all” thorough enough? For Masali, having an interracial relationship at the heart of the narrative is designed to challenge those that see love as a solution to everything: “It teaches people about their positioning in the world in relation to who they interact with. It teaches people about privilege. Everyone can relate to them in some way. We can all learn something from them.” As such one takeaway according to her is that Noughts + Crosses exposes the power dynamics that exist between us all, and forces us to examine even romantic relationships

As Noughts + Crosses is shown on the BBC, it will be interesting to see how it is discussed within the black community. A divisive debate has arisen within the black diaspora, where pockets of the community have been labelled as “black capitalists”, i.e. black people that seek to rise to the top of society’s hierarchy, with no intention of deconstructing the hierarchy itself. In this context, will seeing a show where black people are the ruling elite empower the black community? Or, will it instead spark a debate where many of us will be faced to confront the fact that perhaps the reason why we enjoy seeing the Crosses in power is because we’re not against the racist system, we are against our subordinate position within it? After expressing this concern to Koby and Masali, they both look at each other, reluctant to respond. Whilst laughing, Koby exclaims, “This is a bit techy [slang for technical] you know. You’ve been attacking us since we got here!” Perhaps this is too big of a question to pose on a Thursday night in this intimate cafe in Bethnal Green.

There’s no doubt that Noughts + Crosses is a TV series that raises many questions. Seeing a world that is so different, yet so similar to our own, is a testament to Malorie’s eloquent storytelling. Koby reflected on how powerful this storytelling is. “It’s a whole different ball game, we’ve built a different world, showing how colonialism works, and how it informs the show’s reality.” Masali agrees. “We are all doing a lot of unlearning, sometimes it all feels a little too real, but it is a conversation that needs to be had.”

Noughts + Crosses continues on BBC One on March 12, and you can catch up on the series on BBC iPlayer now.