The secret life of black beekeepers 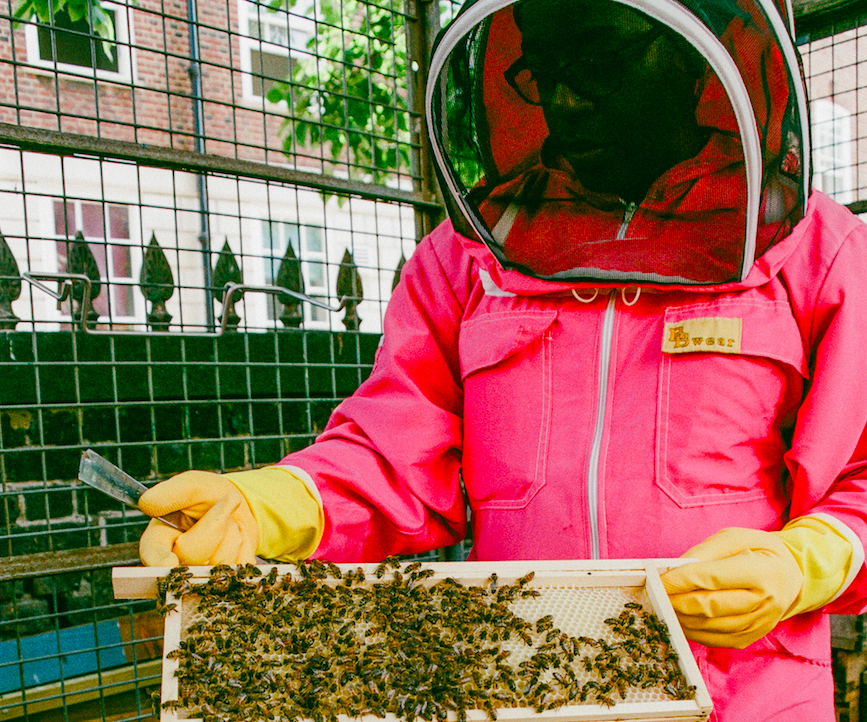 My knowledge of bees and beekeepers prior to meeting Carole Wright was pretty abysmal. Everything I understood stemmed from popular culture, specifically The Bee Movie and The Secret Life of Bees. Although both are fictional – one is an animation about bees suing humankind for using their honey and the other is a story of three beekeeping sisters in North Carolina – the latter was my only reference to the existence of black beekeepers.

I had no idea how many apiaries (the technical word for beehives) there were hidden around London, particularly in south-east London. As it turns out, the city has the highest density of hives in the UK. There are apiaries at the National Theatre, Kennington Park, Tate Modern and Tate Britain, to name a few.

“Not only is she a black beekeeper in London, which is a rarity in itself, but Carole has a hot-pink bee suit”

Carole’s bees are situated in the garden of Saint Paul’s Church in Waterloo, hidden in plain sight. She has a pretty sweet – excuse the pun – memorandum of understanding with the church. For the cost of one jar of honey, and delivering talks about beekeeping at the church’s fete, she gets to have an apiary in their community garden.

As bees tend to fly off in the afternoon, we met on a tropically hot morning – the ideal time for visiting a beehive. Carole is a busy woman and somewhat of a big name in the inner London community garden and beekeeping scene. But becoming a beekeeper is no easy task.

She first joined Wimbledon Beekeepers before becoming a member of the London Beekeepers Association, where she took her basic bee exam. She then shadowed a Peckham beekeeper, and together they visited apiaries all over London, before Carole was eventually asked to run an apiary in St Paul’s Church.

Not only is she a black beekeeper in London, which is a rarity in itself, but Carole has a hot-pink bee suit. She talks us through the inspection of her apiary: “This is the pacifier, but I haven’t actually used it. That’s how calm these bees are.” And she’s right, the bees lazily hover around us.

As Carole gets to work efficiently in her hot-pink suit, there’s something so refreshing about her hypervisibility. She is like a rare flower attracting bees, and even a few people come over. I’m not sure if this is because it is peculiar to see an apiary in Waterloo, if it’s her bright suit, or the combination of the two associated with a black woman.

“Where people might have pets or children, I have the bees”

One woman stands in silence observing and then leaves. Then a construction worker in a hi-vis comes over and asks if the bees will sting – to which Carole shrugs. “Not a sensible move,” she says after he leaves. “They’re very calm bees, but if you come over here in yellow…”

Carole also simplifies the process for me. “Honey actually goes through the bee,” she says. “It’s like bee vomit.” Before now, the honey-making process was something I had never thought about. “They are Italian bees,” she explains. “Where people might have pets or children, I have the bees.” And you can tell she truly does love each one as if they were her child; Carole often refers to the queen bee as “girl” – it’s endearing. In a full season, an apiary can have around 80,000 bees, but Carole only has about 30,000 bees now, which she explains “is a miracle”.

Bees are an intrinsic part of life; globally, one third of the crops we consume are pollinated by bees. Without bees, plants can’t be pollinated, and this impacts agriculture. But last winter was especially hard on Carole’s bees. The snow meant they travelled long distances only to find they couldn’t reach the pollen. “I fought to save them,” she explains, but many died of fatigue and they were simply “knackered”. She informs me that “they’re now back on track,” as she shows me all the golden honey they’ve made in a week.

Sadly, the lack of forage in south-east London means the bees are still struggling. “Honey production in this area has gone down over the last three years,” Carole says. “Beekeepers in this area have lost colonies of bees. We’ve lost a few community gardens,” she explains.

“It’s for me to say to young black women and girls, ‘did you know you can be a bee farmer?’”

I ask Carole what we can do to help the bees. The answer is easy: “flowers … even if it’s just in window boxes,” she suggests, “but don’t use pesticides”. Carole also recommended getting children into gardening. “Make it interactive. I know there’s been lots of cutbacks in schools, but ideally start a little gardening club.”

I ask why there aren’t that many black people beekeeping. “It’s not flagged up as something we do,” Carole says. “Kind of like walking groups.” She understands how she can be a role model, and for those interested in the profession, she suggests getting into contact with black beekeepers like herself. “I think it starts from primary school age. It’s for me to say to young black women and girls, ‘did you know you can be a bee farmer?’” Carole is breath of fresh air; she’s as caring and nurturing to her bees as she is to the wider nature community in London.

One secret you might not know about bees is that they love water. If you want to help look after them leave a bowl of water outside and they’ll drink away.