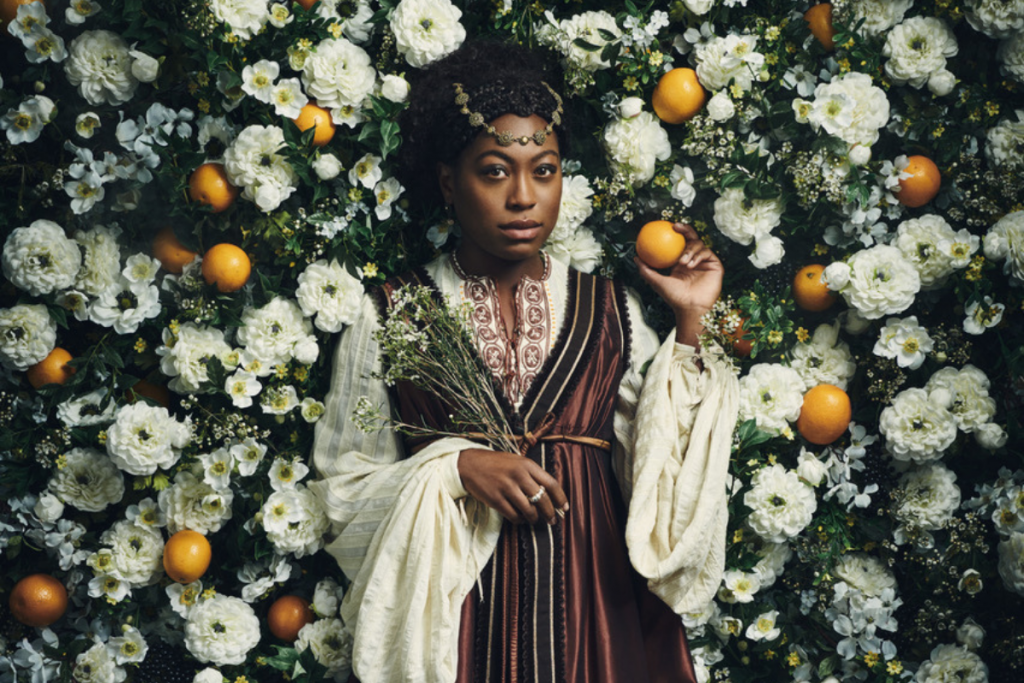 Still via The Spanish Princess / Amazon Prime and Starz

Stephanie Levi-John walks into the room bursting with warmth and confidence. Visibly disarming with her radiant smile and an athletic frame thanks to weight-training, her enthusiasm and kindness are also enchanting. Stephanie has spent years acting on stage at venues such as The National and Unicorn Theatre and briefly on TV projects such as Top Boy. Now she stars in The Spanish Princess, a Starz series available on Starz Play Amazon Prime series centring on the story of Catherine of Aragon and her court as they make their way to England from Spain – navigating the challenges of a foreign royal and political environment and entirely new culture and country.

Thirty-year-old Londoner Stephanie was first inspired to act when her friend, scouted on the street, appeared on stage at the National Theatre. At the tender age of eight or nine, Stephanie felt that she saw a representation of herself. Twenty years old, her role in The Spanish Princess should be a breakthrough: this is the third series following the story of Catherine and based on novels by Philippa Gregory, with a previous series being Emmy and Golden Globe Award nominated. And who does Stephanie play? Catalina “Lina” de Cordonnes, whose character is based on an African Iberian lady-in-waiting who served in Catherine’s court for over 20 years.

“Honestly, it’s a story that needs to be told,” says Stephanie. “When I think of period dramas I think ‘OK, exclusively white’. So then to see Lina and to see that she’s human, she’s not subservient… she’s there to do her job, but she makes as many sacrifices as Catherine of Aragon does; she leaves everything she knows behind, everything, to come to England. She falls in love, she feels guilt, she feels anger, she feels pain, just like everybody else – so it’s a human story that we’re telling and it was a pleasure for me to play that.

“I know that people will take issue with the fact that Lina is black, but according to our historian Onyeka Nubia, Catherine of Aragon had a black lady-in-waiting for 24, 26 years. Why has this not been a story that we have been told? Why have we been led to believe that we didn’t exist? In London, I believe in the early 15th century there was a small population of Africans and black people, people of colour. I think that’s what drew me and I felt I wanted to give her story justice.”

“I know that people will take issue with the fact that Lina is black, but according to our historian Catherine of Aragon had a black lady-in-waiting for over 20 years”

Emma Frost, the co-showrunner on The Spanish Princess, as well as the previous two series’ on Catherine’s story, has approached the stories behind a diverse royal court in the 15th century with nuance and humanity. Lina’s narrative not only interrogates her blackness, but also what it means to be an immigrant woman. “Can you imagine going from something that is known, that is normal to you, to [something] that is now foreign to these people? It was great.”

As an actor, Stephanie had to approach a role that was based on someone real, but one whose experiences were overlooked by history; so little information was available that she had to use her “vivid imagination”, to make the role her own. “I don’t have history books or programmes or anything for me to refer back to, so I thought let me think of this logically and imaginatively and within a human sense. How would she approach [a situation] when somebody calls her ‘black-puss’? How would she react to that, knowing her status, knowing where she comes from, knowing what her purpose in this country is?”

“For example [the script said that], Lina’s parents converted from Islam to Christianity. They had the whole Spanish Inquisition, Muslims were being persecuted, so in my head, as Lina, my parents, they had connections with the royal family, they converted out of survival, which has trickled down to her.” Stephanie’s character is staunchly Catholic and when she meets Oviedo, her Muslim love interest, she tries to block him out as it’s “a source of pain, that’s her past that she doesn’t necessarily want to address”.

History books short-changing Western audiences on the truth of people of colour and their place is just one of the obstacles to bringing a diverse cast into period stories on screen and in popular culture. I ask Stephanie whether she thinks actors of colour should be brought in to play characters that were originally white?

“That is a wonderful question, really and truly. Me personally, talking from an actors point of view, yes I’m very aware I am a black woman, very aware of that. I want to get a job on my talent; I want you to know that when I work for you I will give you my all and I’m good at what I do. I do not want you to book me because you need a token black person in your show. My place as a black actor, or an Asian actor, or a Latina actor has to be valid within the piece. So talking about people of colour’s stories is important. Playing someone who is stereotypically white as a different race? Why not. If it’s something you want to experiment with, do it; but if you’re doing it to specifically point out that ‘we’re diverse here’ rather than thinking about the essence of it, is that helping the cause, is the question. And that’s the beautiful thing we did in The Spanish Princess; when we come with our entourage, there are people of colour. It’s not just me.”

This was the first time Stephanie was able to have so much direction by women on a project; all but one of the directors of the series were women. “It’s really inspiring to see these women at work.” Asked if it makes a palpable difference on set, Stephanie agreed. “It really, really does, because, for example, certain scenes the director could relate from a woman’s standpoint to what that character’s going through, because she’d been through it or she’d been around it or known people who’d [been through it]. I felt nurtured, I felt encouraged. I felt like it was OK to make mistakes.”

Speaking about the atmosphere on set, Stephanie opened up about the difficulty of being her “own worst critic” but that “the dynamic was really, really supportive”. “I had an inferiority complex where I was just like ‘I’m with these people and I don’t understand why I’m here… [But] we are a team and I made some really wonderful relationships with not only the cast but also the crew. It was a really beautiful place to be and as the biggest thing that I’ve done, it was nice to know that I have the support of everyone around.”

“I do not want you to book me because you need a token black person in your show. My place as a black actor, or an Asian actor, or a Latina actor has to be valid within the piece”

Agreeing that women of colour need to be behind, as well as in front, of screens, Stephanie spoke about the importance of theatre for getting people engaged with the art form. Indeed, that is how Stephanie herself found acting. “The face of theatre I believe is changing, and it is becoming more accessible. [But] coming from a working-class background, theatre is never really a thing that you do. We need to start with a younger base. We need exposure, we need to make theatres, even if they do a one-off, once a month thing, we need to do the marketing and promotion for people to know that theatre is a safe space; there’s nothing like it. You’re watching life happen in front of your eyes,” she says.  “Let’s show them stories they relate to; talking about their culture or their religion or [how] they’re growing up, that’s the way I started, and I think there’s no better way.”

And how important is it that children see themselves on stage? “It’s so important to see yourself in theatre, on film, in television, in media outlets. I really don’t think, if I hadn’t gone to that play and seen my friend, there on the stage, I genuinely don’t think there would have been a way where I’d have been like ‘actually, I can do that’.”

What excites Stephanie and brings her to life as a storyteller and an artist is the idea that stories we haven’t heard of before, histories that we didn’t know, can become the focus of our attention. She is currently writing a one-woman play on teenage pregnancy.

“I went to an all-girls school for secondary school and within my school there were a lot of girls who had children young. Something that I’ve always found interesting is how does, essentially, a child raise a child? You have to grow up really quickly; I find it quite admirable that young girls have the responsibility of a completely other life, how they manage to do it. The gaze is always to look and judge, whereas I want to do it the other way, through other peoples experiences, my imagination, I feel a connection; it could be a story that I think could reach the masses. I would love for people who’ve been through the same thing to be able to see it and say ‘I see myself’.”

Stephanie’s hope is to inspire someone the way her friend inspired her. From her practice of Reiki and her belief in the value that weight-training can bring to women’s lives, to her aspirations for the one-woman show, Stephanie is a great believer in the power to overcome. “We’ve all got things we need to overcome, we are constantly faced with challenges. The long-term goal is to be balanced, to be the best me that I can be.”

Stephanie stars as Lina de Cardonnes in The Spanish Princess, Sunday’s at 8pm on Starz Play and Amazon Prime.