The struggles of returning to a very white hometown after uni 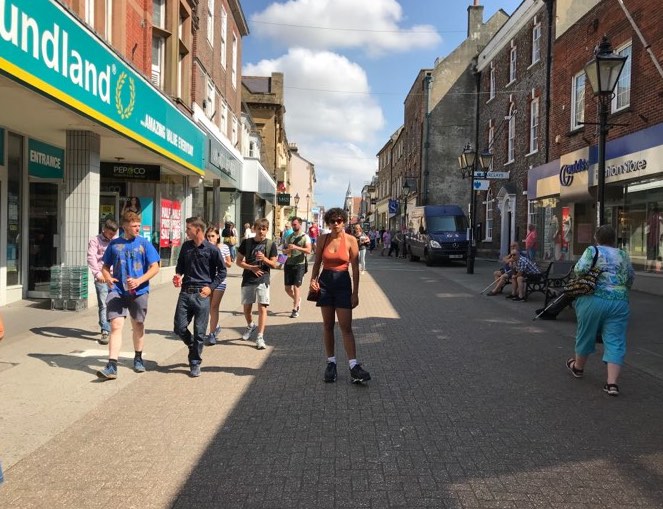 In less than 24 hours of being back in my hometown after my graduation week, on my first trip into town, I noticed a man staring at me unflinchingly from the moment I entered a shop until the moment I left. I came to remember what it feels like to be seen as other. The man was giving me the look I had grown so used to in my school years, but with an intensity I had almost forgotten during my three years away. It was the white gaze, the look (or in some cases, stare) that I receive from white people when I simply exist in proximity to them in spaces where there are few other brown bodies around.

This is Dorset, the heart of Brexit country and overwhelmingly white. I have often seen the figure “98%” bandied around. After having found friendships and relationships with people of colour at university, I have now found the loss of these immediate networks to have compounded my “graduate blues” with feelings of a sort of racial isolation.

Growing up I became accustomed to being surrounded by whiteness, all my friends and family were white. The white fragility-induced silence surrounding the subject of race (my own and that of others) was something that I became complicit in for fear of “awkwardness” and alienation. Discussion about my own non-whiteness remained superficial – friends lamenting their own “lack of tan” – “maybe by the end of the summer I’ll be as black as you!” or a conversation about whether or not they would want a mixed race baby, “because they’re cute but they might not look like me”. A friend’s parent conspiratorial comment about me “meeting all the quotas” being the reason for my university acceptance. For the most part I joined in, or laughed comments off to avoid being seen as having an “obsession with race”. The closest I got to a racial consciousness was lamenting the complete lack of darker foundation tones in my local Superdrug.

Being one of maybe half a dozen non-white bodies in a school of 3,000, I made the choice to “embrace” my difference: if they’re going to notice me anyway, I might as well give them something to look at. I wore colourful clothes, got involved in performing arts, campaigned for student president. Outwardly I had no identity crisis – and perhaps I didn’t have one inwardly either – I simply accepted my existence as a (mostly fondly) looked upon object of the white gaze. When people stared in the street, I told myself it wasn’t because I was black, it was because of my fuchsia dress. By the end of my 10 years in my hometown, I had started to believe it as well.

But coming back has changed that, walking down the high street in a pair of jeans and trainers I could still feel dozens of eyes on me. I could feel my mouth stretching into a smile, to reassure onlookers of my harmlessness. Walking around my university town (though ironically still one of the whitest in the country) I had grown accustomed to the joys of inconspicuousness, of being able to live my life free of the gaze. Now back in Dorset, I had tried “dressing down”, headphones in, going about my life, and the gaze felt just as stifling as ever.

The privilege of whiteness is, of course, its innocuousness. None of my friends or family felt the need to discuss my “race”, because what does race matter? We still love you, we still want to be your friend, we don’t even think of you as black! But this of course was also the power of whiteness, its ability to silence non-white voices through its cheery denials. And when they are so sure that they don’t see me differently, how can I convince them that others do? That these microaggressions I experience every day are racialised and that a sustained stare means something different to them, as white bodies in a white town, than it does to me as a visibly black body in a white town?

Revisiting this from a dynamic of understanding and solidarity I experienced in my relationships with people of colour at university has been tough. Through my university relationships and interactions, I had revelations about racism and whiteness and how they work together to exclude, alienate and oppress. I put a name to that particular kind of discomfort that comes from having my hair touched without being asked, being told that I don’t “sound black” or having to explain to someone that “half-caste” is not really the appropriate terminology anymore. And these recognitions could not be reversed.

It’s harder than it was before to convince myself that the stares are well-meaning or even benign. Having experienced the particular joy (and anger) that comes from conversation-cum-realisation I have shared with other people of colour, how can I go back to white silence, and enforced obliviousness?

And so, I have devised a regime of self-care, my strategies are as follows.

Talk. I understand that it is not my responsibility to educate white people, but equally, it is not my responsibility to protect them from the “awkwardness” of bringing up race. For me, silence is something I cannot go back to. With so many hours of graduate unemployment on my hands, I have decided to give over some time to call out white privilege, even if that means making my friends and family uncomfortable. I will not spare them awkwardness by not mentioning that the white man in the shop stared at me unwaveringly from the moment I stepped inside until the moment I left and that I do not think it had anything to do with my “eye-catching earrings”. For me, the silence is more intolerable than the often tiring task of educating against white ignorance.

Stay in touch. Obviously staying in touch with friends you’ve made at university is something most people want to do. For me, part of refusing silence has been about regularly talking to the non-white friends that first made me feel so heard and understood. It doesn’t have to be about the man in the shop, it could just as easily be about racism on Love Island, or even… just Love Island. The point is that I need to keep race in the remit of things I can talk about, casually and without awkwardness, and that is simply very hard to do when you only come into contact with white people. The networks I built at university are part of my self-care – they are not only about friendship but also an important way to mediate the graduate blues as a person of colour.

Read, and watch people of colour. I have found solidarity in virtual networks, from black Twitter and articles on race to majority-PoC Netflix shows. The distinct lack of actual black and brown bodies around me can be momentarily forgotten by seeing them, hearing from them and reading them.

In its crudest form it’s a reassurance that they are out there, beyond the miles of white countryside, and that when I escape this small white town, they will be there waiting for me. The graduate blues will pass, and so too will my sort of racial isolation.