In her own world: an interview with Tierra Whack

We sat down with Tierra Whack, one of the most interesting, creative rappers to emerge in recent times, to talk about self-care, adulthood and imagination. 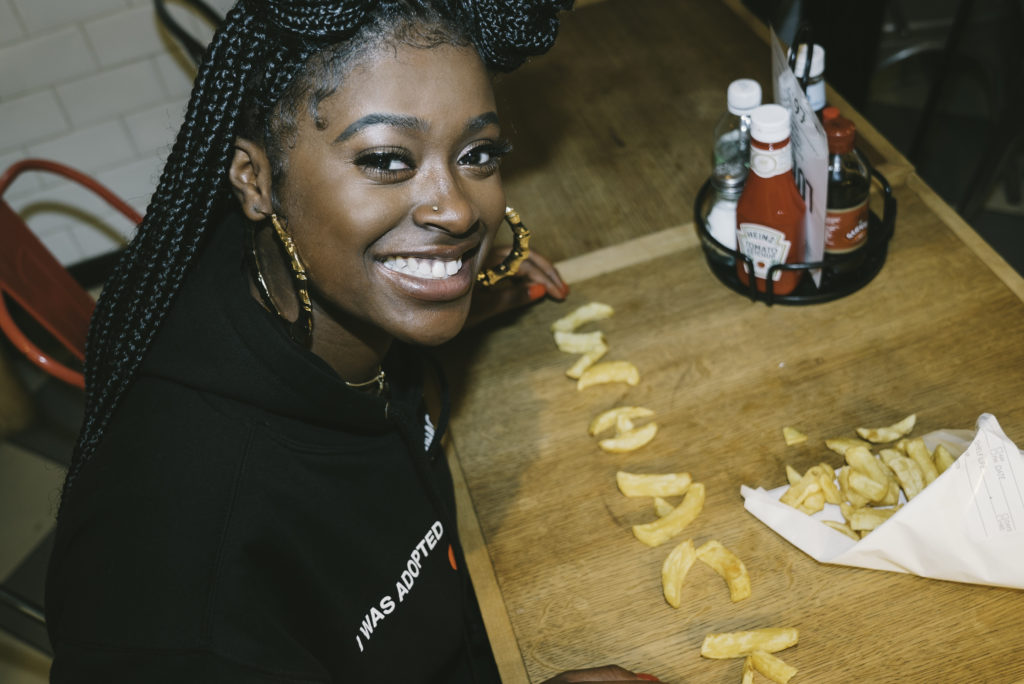 Perched on a stool in an east London chip shop, Tierra Whack is using her food to playfight and dance around the table. One minute she’s cradling a bag of chips like a baby, the next she’s toying with individual fries in her hands. This is perhaps the best introduction I can give to Tierra Whack’s world.

In the past year, the 24-year-old rapper-singer, who can count Remy Ma, Solange and Erykah Badu among her fans, has become one of hip-hop’s most celebrated voices. Her phenomenal 15-minute debut album Whack World popped up in pretty much every “Best of 2018” list, while the video for her single ‘Mumbo Jumbo’ earned her a Grammy nomination. She was selected by rap tastemakers XXL as part of their 2019 Freshman Class and her first-ever show in London at Hackney’s Village Underground sold out in less than 60 seconds.

I meet Tierra in the midst of what sounds like an unrelenting press trip. In town for two days, her schedule is rammed with an impossible number of shoots, interviews and radio appearances. “Things aren’t always good,” she says, gazing wide-eyed out the window, occasionally looking to me, as though sizing me up, “but you gotta find the good in every situation. On a physical but also spiritual level, what you put into your body is what you give out. I have to maintain self-care during everything, so drinking a lot of water, eating fruit, praying…” She laughs at her own words – those already in the fandom will be aware that Tierra makes reference to the importance of eating fruit and staying hydrated on her album.

The chip shop is heaving – not with the usual Friday afternoon crowd so much as Tierra’s excitable entourage. People I have assumed work for her are mainly her friends from back home: “It’s important to have them around me – I started with them, I wanna finish with them.” Having your core support network with you on the road is certainly one way of alleviating the stresses of being a rising star.

The story goes that as a teenager Tierra was part of the Philadelphia scene, releasing straight-rap freestyles under the name Dizzle Dizz – but felt unfulfilled as she wasn’t being fully true to herself. But then, her mother got a new job and so the family moved to Atlanta, Georgia, where Tierra found her sound, got signed to behemoth label Interscope and, via a handful of solo tracks, Whack World was born – a record that drew from all parts of herself. “I want to explore every side that I have,” she says now.

“Things aren’t always good, but you gotta find good in every situation”

While a bunch of one-minute songs might have seemed gimmicky from another emerging artist, it’s been a promising taster of Tierra’s artistic possibilities, which have since been realised on her normal-length tracks such as the glowing ‘Only Child’ and choppy ’Unemployed’ (The latter’s macabre couch-potato video with sentient spuds was, incidentally, the inspiration for this shoot.)

Tierra’s presence also makes it clear that the brilliant, chaotic energy of Whack World is just who she is. In conversation, she leaps from topic to topic; presents long analogies; goes quiet, suddenly, disappearing into her own head; even provides deep narratives on things she spots on the street outside.

At one point, for example, we see a child helping her dad unload his lorry of Italian food, and Tierra is off: “Wow, she’s opening that big truck! You think she drove the truck too? Is she about to get in the back of the truck?? That box says, ‘Good pizza!’ – it’s probably bad. I kind of just want the box, not what’s inside. What do you think the next box says? A blank box? You don’t know what’s gonna be in there! Man, this little girl is really helping. I want to be her when I grow up. Wow. This is the best thing ever, this should be a movie. I hate olives so bad! I don’t like people named Oliver – it makes me really angry and I want to pull my hair out. She’s making a beat with the box, did you see her, did you see her? Watch out!”

“I always wanted to be inside the TV, to be an entertainer”

Tierra is innately entertaining, from the way she tells ridiculous, exuberant stories to the way she poses for the camera. “I always wanted to be inside the TV,” she says when I ask about her childhood dreams, “I loved the TV so much, I used to sit in front of it like this,” – she mimes having her nose pressed up to the glass – “watching music videos and cartoons. I always wanted to be an entertainer.” But her desire to keep people smiling also feels conscientious.  At one point I’m stumbling over my questions, apologetic, and she immediately points to a sign across the road: “‘You’re Beautiful’. Look, that’s a sign! I’m so happy to be here. You’re beautiful.”

Tierra talks a lot about “leading with positivity” – and at times it can feel a little starry-eyed and childlike. But, for all her references to not wanting to grow up, it’s not that she’s oblivious to the ugliness of the real world. Her songs delve into strange places of darkness, and in conversation she mentions moving from a project neighbourhood in South Philadelphia to a more affluent area with more white people: “I made white friends, and then their parents would be racist. I could just tell they hated my guts – you can feel when somebody is evil, and I think that is evil. I think everybody should love everybody.”

The real world, alluded to in her bars, is a daunting place then. Tierra talks at length about escape rooms – which she loves – as a metaphor for adulthood. “Your parents have instilled all this stuff into you, and then it’s like they put you into a box – how to think, how to eat, how to live, what’s good what’s bad – and you have 60 minutes to figure it all out,” she explains. “Then you get out, you’re free and you do whatever the fuck you want! That’s what adulthood is like. It’s scary. It’s a trap.”

“Adulthood is scary. It’s a trap”

Leading with positivity, then, comes not only in the fact she doesn’t smoke or drink, but in the way she preaches that people should follow their hearts, in spite of how terrifying that might be in the stifling framework of adulthood. “God will lead me in the right direction, I believe that,” she says, but it’s also her family who have led her down this path. While her “deadbeat dad” gets a write-off in ‘Fuck Off’, Tierra’s two younger siblings, her mother and grandmother mean the world to her.

Her mother is her best friend, she says, and she speaks lovingly of her late grandma. “She was everything to me,” she tells me. “I miss her a whole lot. I wish I could have took her somewhere like this – but she’s here, right? I’ve started to believe that. She’s watching. She’s probably like, ‘God, give me this, give me that!’”

One thing she and her grandmother used to do together was crosswords. In the same way as escape rooms, Tierra also loves puzzles, describing the process of creating as similar to putting the pieces together. This enthusiasm for games is clear in her music (references to Uno, Mario Kart and tic-tac-toe find themselves in Whack World) and even at her live show. In London, wordsearches are handed out before the gig begins, while she wears a white hoodie covered in letters; members of the audience are then invited on-stage and given marker pens to find words, after being spun around so they’re dizzy. To be a Tierra Whack fan is to engage in silliness and fun, while also luxuriating in some genuinely stone-cold bars.

For Tierra, the antidote to all the bad things is a big heart – be that spreading positivity or even just encouraging people to dream – “and then turn[ing] your dreams into your everyday life!” But underneath that whimsical, naive kind of sentiment, you get the sense that Tierra is a lot more clued-up than she lets on. She’s quietly careful about the parts of herself she gives away to the industry vacuum. Which brings us back full circle to Tierra Whack’s attitude towards self-preservation and self-care: retreating, happily, perhaps necessarily, into her own head.