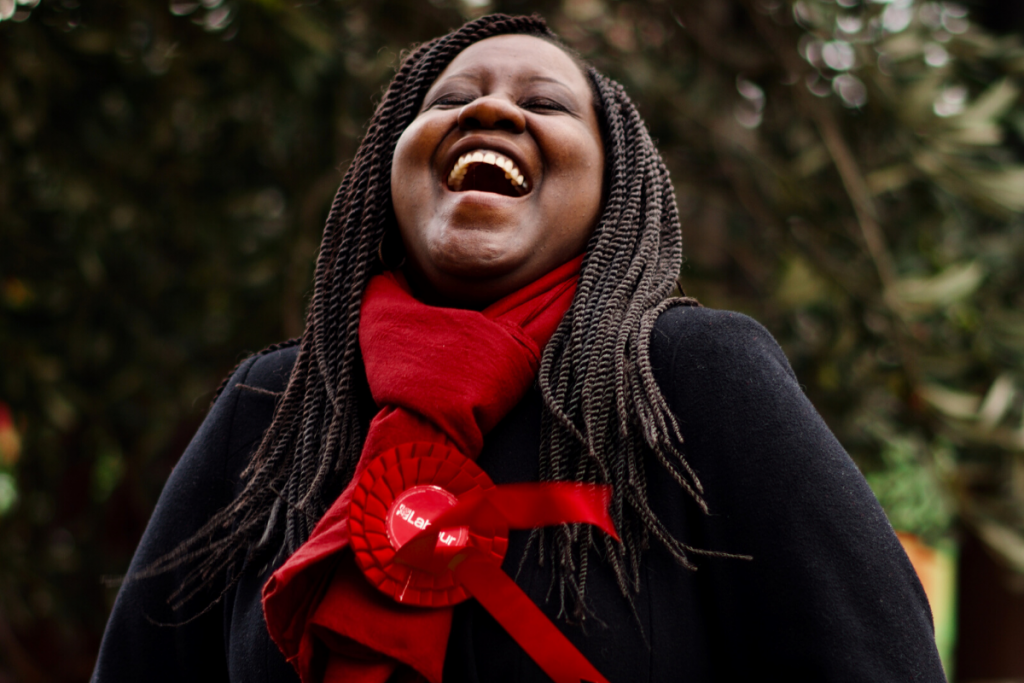 As we close in on the final few days of campaigning, election fatigue is hitting hard and the exhaustion is setting in. It seems that the nation, fuelled by the media, is slipping into a state of collective hysteria. Amongst all of the bickering, fake punches, auditory illusions and political performance, it would help to remember the reason why this election actually matters. Nobody apart from the wealthy were able to escape the wrath of this government’s austerity. One of the biggest victims of cuts were disabled people who saw the discontinuation of key services and funding propel many into poverty. Nobody cares more passionately about the rights of disabled people than Marsha de Cordova, lifelong campaigner and the Labour candidate for Battersea.

Her story is inspiring and in this dreary election period, she possesses unmatched energy and bright flame that warms all those around her. At age 10 she was given a book about Nelson Mandela that changed her politics forever. Outraged by apartheid and inspired by global protests, she knew that activism was a path she was destined for. Coming from a Jamaican-British family of Labour supporters, joining the party was an obvious choice. “The Labour Party’s values and my values are shared when it comes to social justice and equality, but also standing up for people like myself, working-class individuals,” she tells me, speaking at the offices of a trade union in Battersea.

Marsha is vibrant and engaging – I hang on her every word and feel the fire in my belly rising. “I’ve spent my whole life fighting for better access for disabled people, being a disability rights campaigner, wanting to be that voice for the voiceless, speaking out against injustice and trying to improve the lives of disabled people.”

“I’ve spent my whole life fighting for better access for disabled people, being a disability rights campaigner, wanting to be that voice for the voiceless”

In 2014, Marsha was elected as a local councillor in Lambeth. When the 2017 general election was announced, she decided to throw her hat in the ring for the seat in Battersea. Marsha was born with nystagmus (involuntary eye movement) and is registered blind. She explains that when deciding on which constituency to fight for, she “had to choose somewhere that was quite familiar due to my impairment”. The win surprised even her. “I chose Battersea not expecting to win initially because it was deemed as pretty much an unwinnable seat. This was probably part of the reason why I got it in the first place.”

Her election was significant. Not only did she win a seat for Labour but she unseated the Conservative treasury minister, Jane Ellison, who had won the previous election in 2015 with an almost 8,000 majority. Marsha’s new majority of 2,416 was against the backdrop of a significant increase in voter share for Labour with an influx of new MPs and increased majority for incumbents. In the upcoming election, the fight for Battersea has been reported to be tight. Marsha was a popular MP, but it is a strong Remain seat and the Lib Dems may split the vote. At least one poll has suggested that Battersea could be lost to the Tories.

Shortly after her election, Marsha was appointed shadow minister for disabled people. But a lack of in-work support has made having a disability and carrying out her role difficult. “When it came to support, parliament was a little bit shaky on that,” she tells me. “For example, Portcullis House [where her office is] doesn’t have any colour contrasting on doors, proper delineation markings or light markings on steps.” In our conversation, she spoke about the tearfully frustrating issues that come with doing her job, such as papers not being printed in large font. “Everyone gets their budget papers but they tell me, ‘Oh, can you wait till tomorrow?’ Well, no, I need to read it today like everyone else.” In September, it was also reported that she was forced to fire an assistant who helped her prep debates and speeches.

Though navigating this role has had its tough moments, Marsha’s passion remains unshaken. “I’m quite happy to try and break down those barriers if it means another person coming behind me, doesn’t have to face the same barriers,” she says. During the last decade of Tory austerity, disabled people have been disproportionately affected in a state constructed “hostile environment”, Marsha tells me. “We were the first nation-state to ever be investigated about our public policies and our social security was one of the worst because it was leaving disabled people destitute and impoverished.”

Tackling the demonisation of disabled people through parliament has been tough, Marsha shares. “To get true justice, we’ve had to rely on the courts and the legal system,” she explains. “When you’ve got the High Court sending out rulings that this government policy is unlawfully discriminating against disabled people, we have a problem.”

The Conservative government scrapped the Disability Living Allowance, replacing it with the Personal Independence Payment which meant that disabled people saw a significant reduction in the support they received and reduced the quality of their lives. A study in the British Medical Journal attributed 120,000 deaths of disabled people to Conservative austerity in what they label “economic murder”. The Department for Work and Pensions has become representative of the cruelty of the state implementing the government’s intention to paint disabled people as “scroungers”.

“Don’t look at polls. The polls got it wrong for the referendum. Did you think we were going to leave? Because I didn’t”

Electing a Conservative government will inevitably end up in a harsh no-deal withdrawal from the European Union which would be catastrophic for disabled people. “A lot of the rules that come out from the European Union are very positive for disabled people,” Marsha explains. “Being outside of that means we would potentially lose a lot of those rights and protections.” The European Union’s accessibility act is a directive that ensures all members states have common rules on accessibility when it comes to trading. This covers everything from transport, through to reasonable adjustments at work. “At the moment I can’t travel to Clapham Junction station and use that ticket machine,” Marsha says. “I have to go to a ticket office. I can’t do it on my own unless I’ve got someone with me. That is disempowering for me and for the millions of disabled people that are living here.”

Labour’s approach to supporting people with disabilities is the complete opposite of the current government. “We believe in what’s called the ‘social model of disability’,” Marsha says. “This means it is society that disables us. We also believe in disability rights being human rights. The government that we currently have doesn’t believe that.” Last week, Labour launched their transformative disability manifesto, Breaking Down Barriers, that aims to allow disabled people to live full and independent lives after nearly 10 years of Tory cuts. “One of the great policies that I’m really proud of is transport. We’re abolishing driver-only operation trains and bringing back train guards because that allows disabled people to just turn up and go,” she says. The manifesto has a promising host of policies that include reversing the punitive assessment sanctions, incorporating disability hate crime into law, and reinstating the Access to Elected Office Fund to enable disabled people to run for elected office.

Though Labour’s plans feel hopeful, looking at the polling data and daily news feels bleak. People are understandably wondering if it is worth the fight. But Marsha is a constant source of energy and positivity. “Don’t look at polls,” she stresses. “The polls got it wrong for the referendum. Did you think we were going to leave? Because I didn’t. We’ve had such a raw deal over this last decade, this government has been so cruel. I want to make sure that we have a proper education system where inclusivity is part of that. At the moment, social care is in crisis and we want to ensure that independent living for working-age disabled people is possible. All of these things are really important and only a Labour government will deliver them. The Conservatives haven’t even mentioned social care in their manifesto.”

We have an opportunity to end nearly a decade of Conservative rule that has decimated the lives of disabled people in this country. This can’t be done without everyone coming together and engaging in this election. “If you want to bring about change, you’ve got to vote,” Marsha tells me. “But you’ve also got to buy into the vision of what we’re trying to do: bringing about real change. We’re the only party, to my knowledge, that has produced a manifesto with and for disabled people, standing on the principles of ‘nothing about you without you’.”