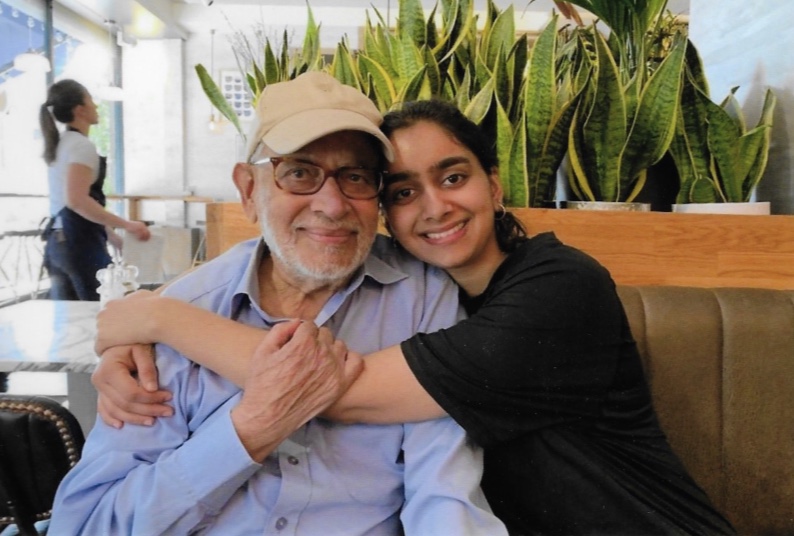 Caring for a grandparent during coronavirus

It’s been suggested that Muslim families living in intergenerational households are some of the most vulnerable to Covid-19. Sana Noor Haq discusses the realities of life at home with her Dada jaan (granddad).

My Dadi jaan (grandmother) passed away nearly five years ago now. The memories I have of what happened over the course of that weekend are fairly vivid. I remember being woken up by Mama early in the morning. Outside the air was cold and it was pitch black, with small stars peeking from behind swathes of grey cloud. Still yawning, we drove to Kingston Hospital and scrunched our eyes closed from the white hospital lights. My brother and I walked along a 10-metre corridor and met Baba by the blue double doors, stepping into the ward to hold my grandma’s hand for the last time.

The first time you lose someone close to you, their life isn’t the only one that stops. In the first few months after my grandma had died, our family life had come to a standstill. Our pain and intense grief was palpable, but no one felt the loss more deeply than my Dada jaan (granddad).

Growing up in a predominantly Muslim South Asian community, I knew that for most families, the natural progression is for grandparents to integrate into their child’s home. He moved in with us, fully unpacking his things in the guest bedroom and making it his own.

I moved back home to London from university in Birmingham last March. In the past year, our circumstances have changed considerably. Time spent in Brum meant that I hadn’t always been privy to the intense stress that caring for an elderly person can put on domestic family life. My parents shoulder nearly every responsibility that comes with tending to my grandad. My Dad now fulfils the role of a full-time carer, whilst still balancing a career working from home.

From taking Dada to the bathroom, to aiding him when he walks around the house to accompanying him as he rides up and down the stairlift, Baba is now looking after him 24/7. Out of everyone in our family, he has sacrificed the most. His own wants are always an afterthought, often trailing behind the needs of others.

Last week, the Independent published an article that revealed British Muslims are some of the most vulnerable to Covid-19. So far, the Tory government has been unable to implement anti-coronavirus measures that accommodate the cultural intricacies of how many people in the country are living. With families living in intergenerational households the likelihood of infecting an elderly member of the community, like my grandad, is automatically increased.

Unfortunately, these circumstances put extra pressure on families like ours who are caring for geriatric patients. Existing under the cascade of an international health pandemic has made us more aware of our own mortality. But when you’re looking after an elderly, unwell person, you are reminded of the inescapability of death all the time.

Recently, my grandad’s health has improved. He’s been sauntering around the house more, his appetite has increased and he’s more inclined to smile when reading the paper or watching TV. Watching his mental and physical health gradually strengthen has felt extremely validating and comforting.

“My grandad is easily the most gentle man I’ve ever met. He speaks with such grace and tenderness”

Being in his presence nearly every day for the last few years has been a blessing. I know that I’m incredibly lucky to have the chance to spend as much time as I can with him. My grandad is easily the most gentle man I’ve ever met. He speaks with such grace and tenderness, and always dots his sentences with “pleases”, “thank yous” and “my darlings” – his soft-spoken decorum never fails to put a smile on my face.

Whilst caring for my grandad, I’ve had the chance to listen to his childhood stories about growing up in Bangalore. I’ve recorded his accounts of journeying from India to Pakistan as a young teenager during Partition, then making his way to the UK by ship. I’ve seen his face light up when he watches David Attenborough documentaries and seen him shine with pride when he tells others about his grandchildren’s achievements.

Over the last 12 months, my understanding of what it means to care for another person has deepened. It’s easy to love someone when they can do things for you, when they can make you feel good and put you first. But when the roles are reversed, it can feel challenging. When you see a loved one become older and frailer, it’s your responsibility to make them feel as though their presence is valued and important. It is a serious task, but it is also a privilege to be able to financially and emotionally support that person. Don’t get me wrong, the lows can sometimes feel lower than the highs – but the memories you make are 100% worth it.