‘Don’t touch my Hair’ by Solange: the soundtrack to my hair journey 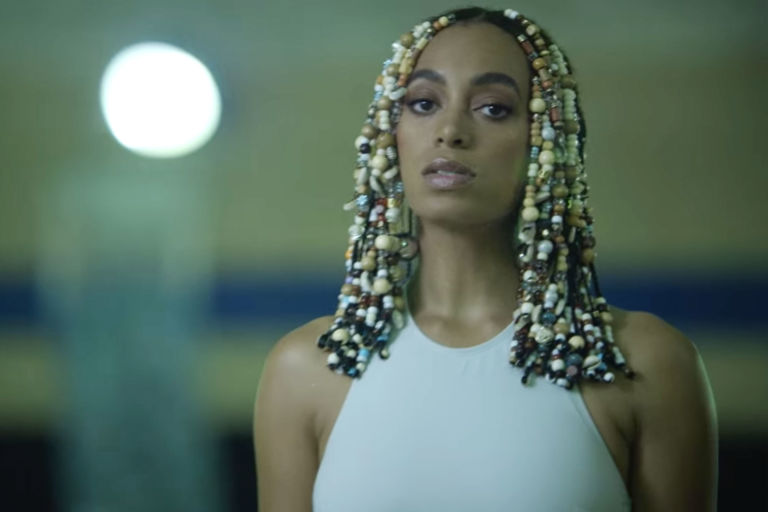 Unfortunately, like many black women I know, I’ve had a pretty tumultuous relationship with my hair. It started as it does for most of us: sat cross legged on the floor between our mum’s legs whilst she tugs and pulls at our roots, in a battle to get the hair to submit to a style.

At age five I agreed to loc my hair. I probably had no clue about what that really meant –  but foolishly thinking it would save me from more hours sat between my mum’s legs, I said yes. I quickly adopted the identifier of “the girl with the dreads”, and, over the years I’ve gone from liking having a unique style, to resenting it; not being able to imagine myself without my locs, to seriously considering cutting them all off; hardly thinking about my hair, to obsessing over it.

Regardless of where I fall on the love/hate spectrum, my many conflicting feelings about my locs are as tightly intertwined as the coils of hair that form the locs in question.

That’s why, whilst blissfully coasting from track to track of Solange Knowles’ A Seat at the Table, and settling on ‘Don’t Touch My Hair’, every feeling of self-recognition and validation that I had experienced listening to the album up until that point, amplified by a hundred.

Solange sings, “Don’t touch my soul, when it’s the rhythm I know. Don’t touch my crown, they say the vision I’ve found”. The lyrics to the song are fairly simple and with a less powerful message, you could easily get lost in the cool production and Solange and Sampha’s soft vocals.  The songs message of pride, ownership and identity immediately filled the blanks I’ve been struggling to fill since I decided to stop feeling insecure and self-conscious about my hair. The second she started singing was an instant “Yes!” moment, similar to the relief you feel when you have a song stuck in your head and are humming the tune for days, to then have the lyrics finally come to you.

The feeling of hearing  unexpressed thoughts so perfectly verbalised is one of my absolute favourite things about music, and only once before ‘Don’t Touch My Hair’ has an artist somehow managed to pinpoint my feelings about my hair.

Of course, the song was India Arie’s ‘I Am Not My Hair’. At the time of discovering it, I had not long made the transition from primary school to “big school”.  Although I wasn’t too aware of its effects, I was leaving behind the comforts of a multicultural primary school to a predominantly white school. What I was concerned about though, was no longer being top of the school. There was a new hierarchy and I was back at the bottom with the rest of my peers. I definitely had no ambition to be at the top, I simply wanted to blend in. However, my hair made that impossible and for that reason, I hated it.

It made strangers shove their hands into my scalp without invitation, or loop the strands into knots when I wasn’t looking, or make shitty Bob Marley jokes that left me more offended by the lack of originality than the fact that they were making jokes to begin with. Even worse, I felt like it left me no choice but to play along and accept all of these things; when a woman on the bus asked if she could touch my hair and then invited her five children to do the same, I sat compliantly like a zoo animal with a forced smile on my face until their curiosity was satisfied; I answered to the nickname “nic nacs” (yes, like the ugly misshaped crisps); I’d let people rub the strands between their fingers and compare its texture to pubic hair or brillo pads. I was ashamed of being so visible, and for not being able to find the words to articulate how all of this made me feel.

So, hearing India sing about having locs along with all of the other hairstyles she’s had, and boldly stating that “I am not my hair, I am not my skin, I am not your expectations”, gave me the fuel I needed to slowly start resisting “the girl with the dreads” moniker I’d carried around for so long.

It wasn’t a quick transition. I’ve now had my locs for around 18 years, and it’s taken a lot of work to reject the European beauty standards that are forced on us, and refocus the way I perceive beauty. That included countless hours spent on YouTube learning to love and style my hair from women like Chescaleigh, who had built online communities of men and women who were passionate about their hair.

Despite the recent disappointing ruling in the US that employment discrimination against locs is legal, seeing the black community defend locs and embrace the style with the continued popularity of “faux locs” has reminded me that even if the style is still rejected by the mainstream, to a lot of people locs are another great example of just how versatile and amazing black hair is.

Together, India Arie and Solange have produced the perfect soundtrack to my hair journey. No, I am not my hair, but my hair, my feelings towards it and even people’s reactions to it have had a huge part in shaping me. I’m proud to wear this style, and I feel proud when I see young girls and boys rocking their baby locs, or the older generation with long, grey speckled locs tumbling down their backs. I’m proud when I see someone sporting a post- big-chop TWA, or elaborately crafted cane rows and I’m equally just as proud when I see a fabulous wig or weave. Black hair in its many forms and variations makes me proud of us, and ‘Don’t Touch My Hair’ – the whole of A Seat at the Table in fact – reinforces that, from the first track to the last.