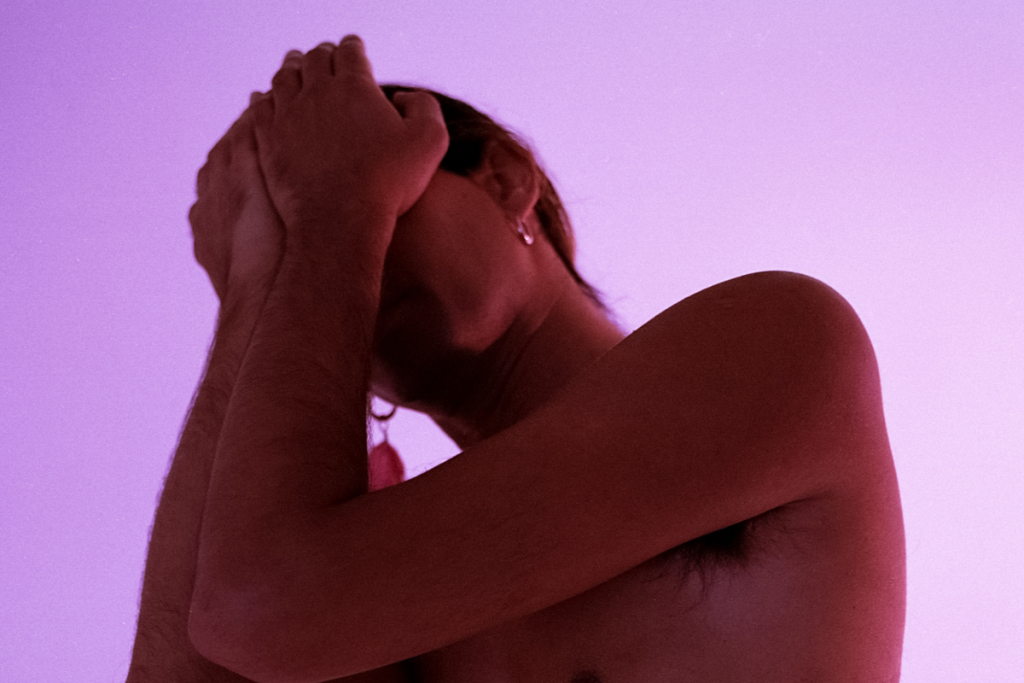 Vulnerability ebbs and flows through the work and life of Adam Bainbridge. Under the name Kindness, the non-binary artist is known for their sweet and emotive sounds (both in their solo work and as a collaborator with the likes of Blood Orange and Solange); but equally, in person, there is an unapologetic candour to them. “I think if you can stick a ‘melancholy’ warning in the first paragraph of this article that would probably be helpful,” they say with a wry laugh at one point.

Indeed, our conversation dips into discussions about death, their mixed-race South Asian identity in the music industry, coming out to aunties, politics and even Love Island. This is along with all the more standard album campaign talk – their third LP is about to drop which, technically, is why we’re talking. The interview is peppered with plaintive pauses and the clink of spoons and china every time one of us crouches on the ground to pour another cup of tea, and it all adds to the sense of contemplative openness that Adam seems to exude. This is perhaps emphasised, retrospectively, by the dreamlike and soft-focus interview set-up, perched on plastic stools sheltered from sheathes of rain by the Barbican’s majestic concrete (indoors isn’t an option because it’s teeming with a graduation ceremony).

Adam remembers being overwhelmed by music the first time they heard a garage track back in their hometown of Peterborough, in a Virgin Megastore, “I think it was a Tuff Jam and Todd Edwards track – to me it sounded like music from an alien civilization. I was hooked, mainly because I’d never heard anything like it before.” Not being from London, this culture beyond “Kylie and Jason at the school disco” felt particularly exciting, they explain, and it made them crave the city and its sounds – although they still can’t programme UK garage beats. “Coming from a relatively out of the way place gives a sense of urgency to the things that you want to do,” they say, “and also a sense of frustration, because in a way you’re trying to break that barrier of what your hometown says you can be.”

In the years that followed, dreams of fashion photography were pushed aside for music – touring as a DJ with Dev Hynes’ band Test Icicles (they met when Adam interviewed Dev), becoming an artist-in-residence research fellow at the Philadelphia Institute for Advanced Study, and eventually releasing their lush debut, 2012’s World, You Need A Change Of Mind. Their second album, 2014’s Otherness found them working with Kelela and Robyn – the choreography in the video for ‘This Is Not About Us’, a single from that era, is honestly still magic. Around this time they met Solange at a wedding, and ended up working on one-of-the-best-albums-of-our-lifetime, A Seat At The Table.

New, self-produced record Something Like A War feels like Adam’s most confident solo release to date, full of uplifting, thoughtful and tender pop with licks of brass from New York instrumentalists and brushes of 80s sonics – it’s joy and introspection against a backdrop of turbulence. The clarity of its sound comes in part through the mixing, done by Kindness’ long-time collaborator and friend, Philippe Zdar. Philippe died suddenly this June, a month before my interview with Adam. While most of us might shy away from these raw conversations, deeming them awkward somehow, Adam is keen to talk about and celebrate their late friends and family: “My dad died 12 years ago, I put my first record out 10 years ago – don’t think that those things aren’t related. I’m still feeling a bit knocked sideways by Philippe’s death, and then this record is coming out so it’s complicated because I can’t help but be reminded about our work together.”

“Grief is a process…it’s something that you survive, rather than it ever going away”

It turns out that the day of our interview is one year since Test Icicles co-founder Sam Mehran died, and so the subject of mortality is weighing on their mind: “Grief is a process…it’s something that you survive, rather than it ever going away.” It’s because of this that Adam’s been thinking about the preciousness of life and how we need to take care of one another and be proactive against a bleak political climate.

Adam’s grandmother Amina Desai was South Africa’s longest serving Indian woman political prisoner, so it’s not surprising that they speak with conviction when it comes to social causes. We speak with jadedness about UK and global politics right now – but they note a sense of hope that the British public at least voted for the right couple on Love Island. It’s the little victories that point to a place where, just maybe, we can mobilise.

They are the first to speak of the privileges that come with being light-skinned and mixed-race: “I have to acknowledge that my mixed-race identity probably allowed me to get further than most of my South Asian peers in music. I think there was an ambiguity where maybe I got signed because I wasn’t quantifiably South Asian. I have to recognise that’s a thing – not just the colourism within South Asian communities, but the colourism in general that says mixed race people tend to get record deals, darker skinned people don’t.”

“My sister tried addressing me as ‘them’ on WhatsApp and all the aunties got confused, so we’re just taking it slowly for now”

Of course, being a femme queer artist coupled with racial ambiguity isn’t exactly a recipe for an easy ride. In the years since their last solo release, 2014’s Otherness, Adam has started using they and them pronouns – and as most QTPOC will know, coming out to your family isn’t always an option. For Adam, their grandmother passing away was certainly a factor in feeling more able to talk openly about their sexuality and gender identity. Their family know now, though not all of them understand it yet: “My sister tried addressing me as ‘them’ on WhatsApp and all the aunties got confused, so we’re just taking it slowly for now. My mum knew I was bisexual when I went to university because I remember her being worried about it. I think my mum’s just always concerned about people’s safety. I think it’s the emotional vulnerability for her too – to her there’s probably something quite scary about being emotionally raw in front of people, which is what you’re doing as an artist.”

They speak plainly about transphobia in the UK media (“It’s good to know who your enemies are”), but also how the internet at least has helped to push these conversations forward for people who are still learning and unlearning about identities. “I genuinely appreciate chaotic platforms like Tumblr and Twitter,” they tell me, “Not only are there memes, and music recommendations, there’s been a kind of learning by osmosis that can happen as you scroll. I wonder how many others that has happened to – a kind of dawning realisation that, rather than just standing in solidarity with a cause or aspect of marginalisation, the better it’s described the more you realise an aspect might be true for yourself. I think that’s how I came to think more about transness and gender non-conforming identities. I did buy a bunch of books too, but the fluid and messy evolution of identity online is probably the most nuanced form of self-reflection I’ve experienced.”

“Gender will probably dismantle itself over time, as will maybe all the constraints on sexuality. Whiteness isn’t going anywhere, unfortunately – it kind of needs to be taken apart, piece by piece”

Still, Adam thinks that the real pressures of ostracisation come from whiteness. “To this day, I actually think that being South Asian in a white supremacist space is probably the most pressing identity issue that I’ve experienced on any of the others, you know. Because I think gender will probably dismantle itself over time, as will maybe all the constraints on sexuality. Whiteness isn’t going anywhere, unfortunately – it kind of needs to be taken apart, piece by piece.”

Of course, finding positivity in times of unrest is incredibly important. I ask if there’s a particular song or album that brings them joy when things aren’t feeling so good. “I really like Solange’s new record,” they say, “I think if you’re in a headspace of chaos and trauma but also joy and pleasure and happiness and contentment – because I think life is all of those things simultaneously. It’s maybe the first album of recent times I’ve heard that spoke to me on that level. I think I’m too close to A Seat At The Table – I never really have great perspective on that,” they laugh, “like if I listened to it, I’d be like, ‘Oh, I remember doing that part’. Or like, ‘why didn’t we include all those great songs that didn’t get used?’”

Collaborations have been a big part of Kindness’ career, and the new album is full of them. The Seinabo Sey feature on ‘Lost Without’ (co-written with Kelela) is lithe and euphoric, and there are also magic spots from the likes of Jazmine Sullivan, Robyn, Nadia Nair and more. “Some are good friends, some are new friends, some I’d interviewed for my radio show and thought it was too good an opportunity to pass up,” they explain, when I ask if there are specific reasons for who they work with, “I guess the one thread would be that I listen to their music all the time already! It seems like a really happy opportunity to have voices you already live with and love come into the mix on your own music.”

“Through genuine vulnerability and openness there could be a societal shift”

It’s only after our interview that I get to grips with the stream I’ve been sent of the new album, and fully soak up that happy blend of voices. There’s a track that particularly strikes me called ‘Softness As A Weapon’. It’s a gorgeous song full of lilting and light pop, and it’s message feels an accurate philosophy through which to consider Kindness themselves. It makes me think back to the power in the delicate vulnerability of our conversation in the rain.

“I guess I’m not suggesting that softness is always an answer in opposition to violent white supremacy, or if someone is negotiating a fee with you for your talents or skills,” they say, “maybe it’s more that through genuine vulnerability and openness there could be a societal shift. That parents would relate to their kids more, that alienation and toxic masculinity wouldn’t become ingrained problems at a young age, that we might support each other better through loss, and grief, and painful changes.”

‘Something Like A War’ is out now on Female Energy, you can stream it here.