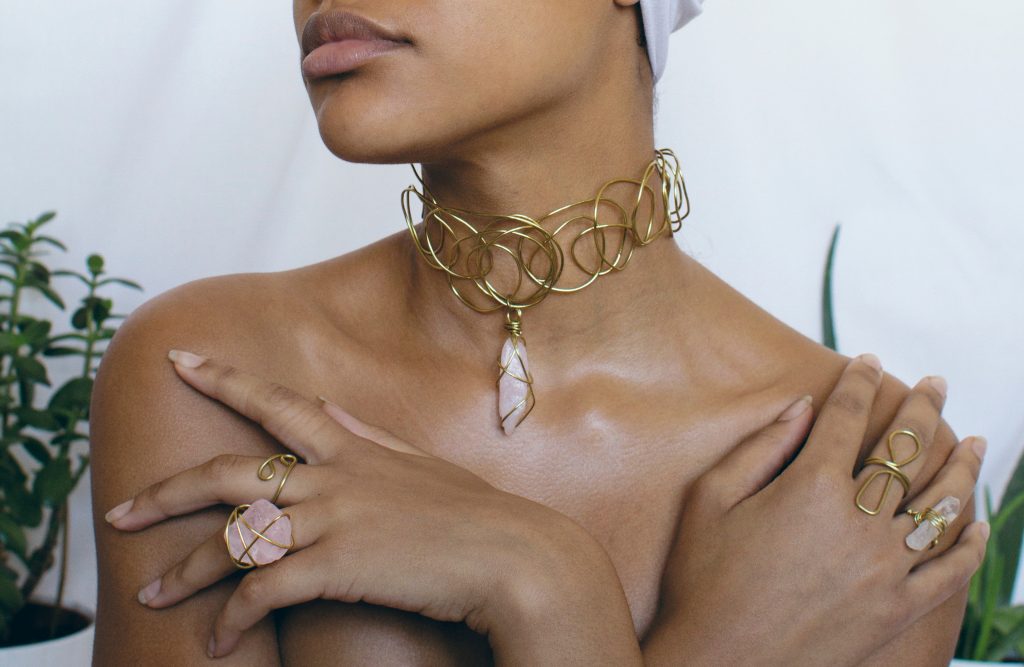 Jewellery designer Suhaiyla Shakuwra’s story starts “everywhere” – as that’s where she says she grew up. “I went between living with my grandparents and my mum until I was 16. I’ve lived in Camberwell, Barking, Ilford, and New Cross, to name but a few places,” she says. Beyond that, her mother is of Caribbean descent and her father is of African and Caribbean descent. From an early age, the importance of her black heritage was instilled and has ultimately bled into the beautiful, twisted designs of her crystal-wrapped rings, necklaces, earpieces, and armbands – each of which is made by hand. Next week will see her first ever print editorial in ELLE magazine’s Love Issue, alongside her official business launch at boutique event space Benk + Bo.

Shakuwra was born Muslim, which is where her name comes from, and her mother is a proud black woman. She would import black dolls, toys and books for Shakuwra from America, instilling the idea that “black is beautiful and that being dark skinned is beautiful”,  meaning that Shakuwra thankfully grew up without the common complex of wanting to be light-skinned or white. “I never had any white dolls, even my cabbage patch doll was black,” she says. “I remember having a massive Barbie dream house and having barbies who were dressed in kente cloth with afros.”

“There is no point in having a beautiful stone and wrapping it so much that you miss its beauty. What I’m trying to do is enhance it”

Her designs take place in gold, copper and silver wires – often placed on the skins of black women who make up her main online customer base – curling lovingly around the cowrie shells, semi-precious stones, and crystals that she picks out for their energy. “When I’m working with crystals, if I’m looking at an amethyst cluster and the way that [it] forms, I want to wrap it in a way that you see the formations. That is important to me, there is no point in having a beautiful stone and wrapping it so much that you miss its beauty. What I’m trying to do is enhance it.” Shakuwra is drawn to the form of crystals, which she says is lost “when they are carved into a sphere or a cabochon [a gemstone which has been shaped and polished rather than faceted]”.

The fact that she uses crystals so heavily in her work isn’t a surprise; Shakuwra is the type of person who will purify your space with burning sage and talks with the calm knowledge of someone aware and in control of their own (and perhaps other people’s) spiritual destiny. It’s a certain sweet intonation and use of language – she will remind you to “be present” in all of your interactions. Growing up she was “always drawn to spirituality and to the unknown”. She had an aunty who nurtured this interest, reading her tarot and introducing her to Buddhism. But, somewhat bizarrely, her attachment to crystals actually stems from a persistent throat infection which refused to respond to antibiotics. 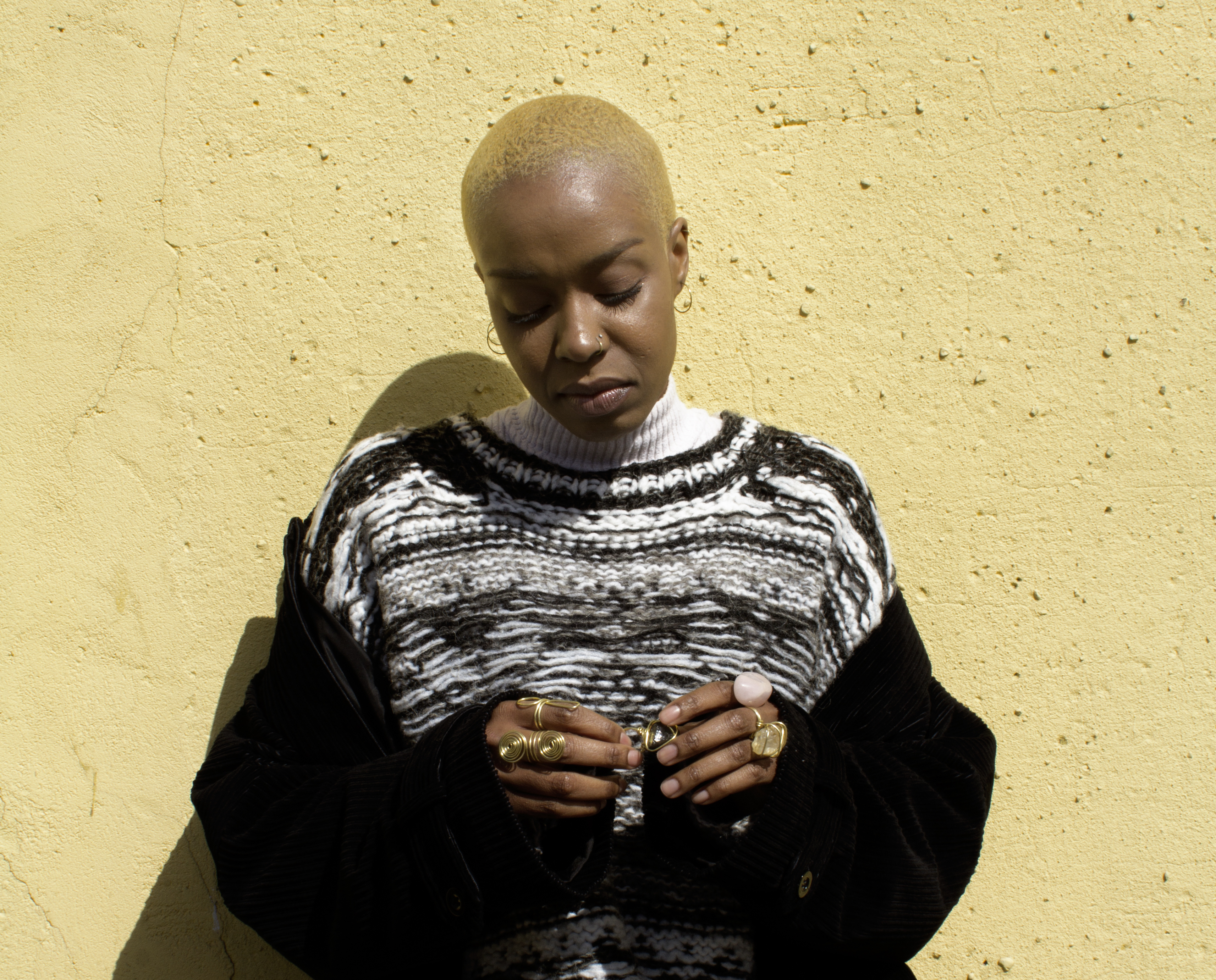 At the height of the infection, Shakuwra asked her friend to take her to crystal shop where she bought three shining stones – purple amethyst, deep blue lapis lazuli, and delicate rose quartz (and some sage). “I remember having a dream that my throat chakra was blocked because I wasn’t allowing myself to speak my truth,” she explains. “I was still battling with this throat infection and something kept telling me to take the lapis lazuli and put it on my throat. The following evening, during meditation, I held it on my throat and asked my guides to cleanse my throat and to draw away any negative energy it.” The pain went away over the course of that day and she hasn’t had a throat infection since. Her connection to crystals has bloomed.

The first piece of jewellery she ever made was a lapis lazuli pendant – a stone that meant a lot to her. But the design itself “wasn’t cute”. A year later, she started to post her jewellery on Instagram and people were enquiring about how to buy it. “I used to get into a panic when too many people would message me,” she says. “I had no intention to sell the crystals which is funny now. I was making them for myself.” Her first customer was one of her best friends but her designs have now graced the skin of some of London’s most eminent creatives, including her partner (gal-dem’s Liv Little), writer and poet Bridget Minamore, Black Girl Festival co-founder Paula Akpan, designer Chelsea Bravo and BBZ’s Nadine and Tia – who bought matching items.

Her ideas for designs come to her at “weird times”. “Really inconvenient times usually, it’s never when I’m sitting at my workbench. I’ll be in bed at night and a design will come into my head.” Once she has the idea, making it into a reality can be a struggle. “Sometimes it can take three or four tries. I’ll have an idea of what I want, sit down and try to make it – try to make it strong and beautiful. There’s a process to it. It’s really important to me that my designs aren’t just aesthetically pleasing, I want them to have longevity, which is why I use the wire that I do.”

Naturally, Shakuwra says she is “very intrigued” by the way our ancestors and the generations before us would adorn themselves in jewellery and crystals – and their big bold designs. “I find it amazing. I’m talking America, North Africa, West Africa, the whole of Africa really,” she says.

But, while jewellery-making in itself came naturally to her, speaking both to her spirituality and the interest she has in people of colour’s ancestry, the business side has taken more time, and she has faced plenty of setbacks, before finding herself on the right track. “For the longest time, I was in a dream world where I could make products and sell without the business,” she says. She didn’t want to take on the responsibility of managing money, accounts, and taking the step into professionalism.

Now, with her work about to published in ELLE – “I feel really fortunate to have my work in such a big publication” – it looks like the only way is up. She is planning pop up shops, events and is looking forward to having her jewellery seen by more people. “I’m excited to see how my tarot reading journey unfolds and continues to encourage healing, around London or the world. My biggest goal is to have a boutique of my own and for that to be a place to come for tarot and crystal healing and crystal jewellery.”