Looking back at another phenomenal professional year, rapper Saweetie talks to Sophia Powell about family, hustler mentality and, of course, those slicked edges. 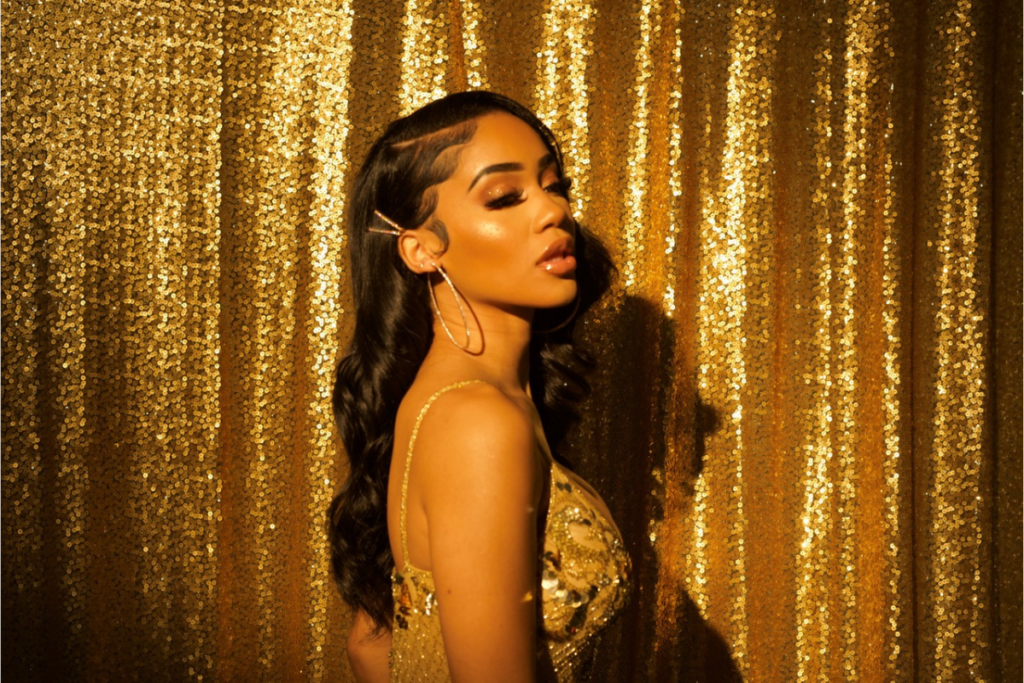 Saweetie has had a hectic couple of years, but in the best possible way.

The California rapper has had a string of hits, including – thanks to Gen Z’s approval on TikTok – two enormous tracks that soundtracked both summer 2019 and summer 2020 (‘My Type’ and ‘Tap In’, respectively). Known for her catchy tunes, playful demeanour and killer aesthetic choices (she won Halloween this year… twice), Saweetie, real name Diamonté Harper, has racked up millions of streams, views and followers, all without releasing her debut album yet.

She’s radiant over Zoom, her damp hair drying in the soft, morning LA breeze. I ask what it’s like to be in the midst of this pivotal moment in women-led rap, and genuine surprise seems to dance at the edges of her eyes: “Two weeks ago, I had a moment because I was asked this and I didn’t realise I was in the middle of all of it,” she says, “I think it’s important to show the little Black, brown and Asian girls that I’m doing something that you can do, too.”

“I think it’s important to show the little Black, brown and Asian girls that I’m doing something that you can do, too”

She first knew she wanted to pursue music at the age of 14 and continues to look up to the likes of Queen Latifah and Rihanna — artists who were able to diversify their creativity into numerous streams including fashion and film, which is something she explains that she’d love to delve into as her career progresses. Despite feeling alienated at college career days, where students were steered towards becoming doctors or lawyers, Saweetie chose to continue with her degree regardless, making the decision that she would pursue music after she graduated. To her, there was no other option: “I had this sort of agreement with myself that I was going to go super hard.”

In a social media-obsessed world, Instagram was instrumental to Saweetie’s success once she’d finished college. The addition of a new feature enabling longer video clips to be shared meant that shrewd, tech-savvy Saweetie saw an opportunity to bring her musical dreams to fruition. Posting videos of herself rapping in her car over hip-hop beats, Instagram was a quick, direct and easy way to get her music circulating. The most popular of these was a freestyle over Khia’s iconic ‘My Neck, My Back’, later becoming her debut single ‘Icy Grl’, amassing an eye-watering 110 million views and counting.

Before Instagram, there was MySpace, something she fondly looks back on, explaining that Saweetie was her name on the platform. Its origins, she explains smiling softly to herself, are “from my Grandma… She used to call me her sweetie”. This adoration for her grandparents becomes even more tangible when she goes on to explain that her closeness to them stemmed from her parents having her at a young age, meaning that her extended family were integral to raising her. While it’s clear that she’s grateful for how her family banded together during her childhood, this instability did create difficulties: “I was always the new girl at school, I was always moving around.”

Expanding on some of the more sensitive parts of her upbringing, she explains the difficulties that came from growing up with mixed heritage – her mother is Filipina-Chinese and her father is African-American. Looking back on that time, she says, “I’m experiencing different types of personalities and cultures. Different behaviour was accepted or not accepted in different places. It would confuse me as a kid. I was constantly getting into trouble because I wasn’t raised with one set of rules.”

Despite this, in hindsight she is thankful: “It made me realise that no two groups of people are the same. Those that grow up in one household may feel that’s how the world operates, because they only know one way of life. But for me, I was shown many ways.”

This awareness of how race affects our daily interactions was something Saweetie noticed from a young age. Seeing her black father, uncles and grandad experience social issues as a child had made her take on the “obligation” to “be vocal about the changes that need to happen”. She recalls moments with her dad, “being profiled, getting pulled over, getting pulled out the car, and I’m in the passenger seat wondering what’s going on, being scared, because they talking to my daddy crazy.”

Her interest in political issues is apparent on her social media. Saweetie not only encouraged people to vote in the States this year, but hosted an IG live shining light on Nigeria’s #EndSARS movement by interviewing someone on the ground in Lagos. She explains, “The world stood with America when it was Black Lives Matter. So I think it’s important for us to stand with them. I wanted to give my fanbase, or whoever’s following me, a moment to educate themselves, while educating myself as well.”

“The world stood with America when it was Black Lives Matter. So I think it’s important for us to stand with them”

Delayed because of coronavirus, Saweetie’s debut album Pretty Bitch Music is due for release early next year and focuses on “exponential growth and producing artistry”. Discussing the feeling she aimed to create within its music, she explains that she “wants people to have fun, to feel sexy [and] confident” but also thinks it’s important to show an example of women “being about your business”. This hustler mentality is core to who Saweetie is and was present even in her childhood years, from selling candy after church and school, to her time struggling before the release of her first single, when, she explains, “I was an office assistant, I was a waitress and I was also selling t-shirts online”.

She gives the polished responses of a celebrity who is used to constant interviews, but is genuine and forthcoming with her answers. Her personality especially shines when she’s posed questions that startle her. When I ask if she has any surprising hobbies, she pauses to think before throwing her head back in laughter, admitting, “I like… to watch people catch fish. The whole process of catching a fish and turning it into sushi.” Her laughter only increases when she sees my amused and startled face. “I love seafood!” she exclaims, and I instantly think of the accuracy of one of her lyrics from ‘Pretty Bitch Freestyle’ – “crab meat, got my ass looking healthy.”

Her former Twitter name was “the Baby Hair Princess”. So what would an interview with her be without some tips for how to get slicked, Saweetie edges? “I use a Colgate toothbrush,” she smiles.

Before things wrap-up, we talk about how her grandparents would have described her as a child: “Curious. I was rough, like a tomboy. I used to play in the mud and collect bugs.”

It’s clear that she has spent time reflecting on her childhood and that it’s the driving force behind the mantra she lives by today: “We only have one life to live.”

While the loud, fun-loving persona she exudes today makes it initially surprising to hear that she was a “quiet” child, she explains that it led to “a lot of regrets” when she was growing up: “Sometimes I wouldn’t try out for things. Sometimes I wouldn’t participate, because I wasn’t confident enough. I wasn’t sure of myself. So I think I’m at a point in my life where I’m just going for everything I want to do.”

Five on it: I appreciate Lana Del Rey, but wish she’d leave WOC out of it