The problem with Zoe Saldana as Nina Simone 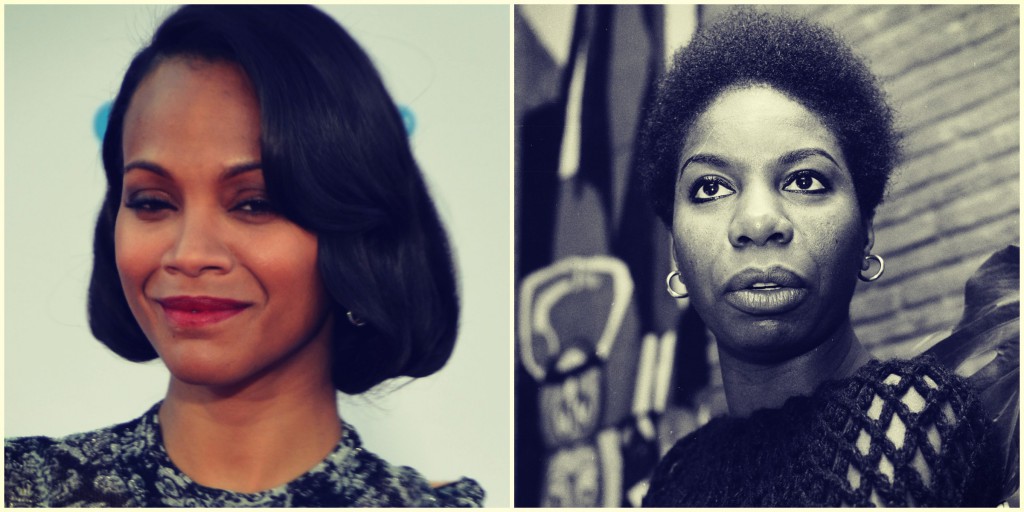 When Nina Simone sang Mississippi Goddamn, Four Women and Strange Fruit, she sang with the mourning power of someone who felt those words and knew them intimately. Nina Simone lived the civil rights movement and lived for her people, the black community that saw power in seeing a black skinned, wide nosed, thick lipped woman speaking back to them and reflecting their stories and their histories in a language meant just for them.

Miss Simone was Aunt Sarah, Safronia, Sweet Thing and Peaches all at once; the embodiment of black-womanness. Not only because of her pride, but because as a dark skinned black woman who chose to speak openly about oppression and resistance, Miss Simone became a politicised body. Her existence was as politicised as her lyrics and eventually, she became tired: “They don’t know that I’m dead,” Simone says in Nadine Cohodas’ biography Princess Noire, “and my ghost is holding on”.

This was a woman who didn’t believe in de-segregation, nor the mixing of races, and a woman whose iconic status outgrew her black woman’s burden. When it comes to the upcoming biopic then, the issue is bigger than differences in shade or width of nose. Zoe Saldana, who claims that “there is no such thing as people of colour”, candidly speaks about her distanced relationship to her Afro-Latina heritage and experience, preferring instead (and having the privilege) to be just Zoe in a world where people are “sized by their souls”.

The Dominican and Puerto Rican actress is not personally responsible for the mess that is this film but she has the responsibility to acknowledge that she is contributing to the implicit racism of not only Hollywood, but a society that will cast a light skinned and conventionally attractive actress like Saldana over the many, many appropriate dark skinned actresses in the industry whilst silencing black women, who like Nina Simone, are vocal about this racism.

It’s not simply about Saldana’s physical appearance, but about a public display of tired societal ideals that value and reward proximity to whiteness; if dark skinned black actresses aren’t able to play dark skinned black characters and people, what is left for them and what does that say about an industry that sees no issue with this?

Saldana has defended her right to play Nina simone due to her willingness to “sacrifice” herself (read make herself ugly) and because Nina Simone’s story needs to be told. No one disputes the need for this story, however, black stories, especially ones of this magnitude, deserve to be written and directed by black people. Nina’s story should be told by someone who respects her legacy enough to turn down a papier mache nose and three layers of Mac’s darkest foundation to pay homage to her. Nina is not a homage, this film is a blatantly disrespectful example of an industry that would not have let Nina Simone play herself in her own biopic.

‘After the murder of Medgar Evers, the Alabama bombing and ‘Mississippi Goddam’ the entire direction of my life shifted, and for the next seven years I was driven by civil rights and the hope of black revolution. I was proud of what I was doing and proud to be part of a movement that was changing history.

It made what I did for a living something much more worthwhile. I had started singing because it was a way of earning more money; then fame came along and I began to enjoy the trappings of success, but after a while even they weren’t enough, and I got my fulfillment outside of music – from my husband, my daughter, my home.

That changed when I started singing for the movement because I justified what I was doing to myself and to the world outside, I could finally answer Momma’s great unasked question, “Why do you sing out in the world when you could be praising God?”‘