Wanderthirst: cycling in my hijab across the Danube path in Austria 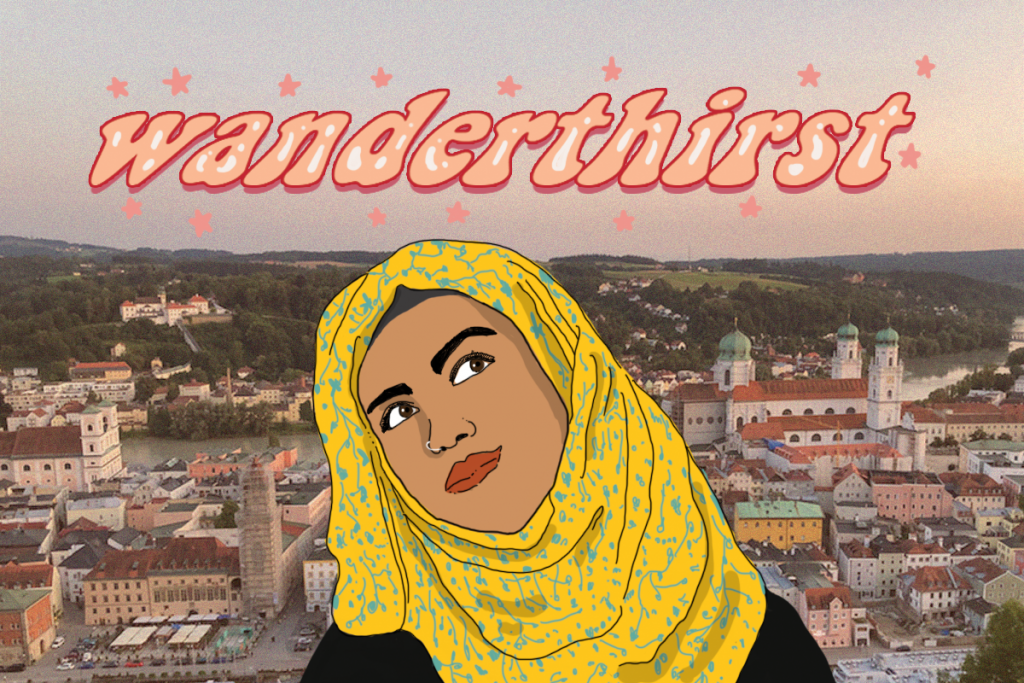 Last year I joined 184,000 Londoners and became a commuting cyclist. It managed to solve my exercise and budget dilemmas whilst also being surprisingly fun. So, when my friend suggested an active summer holiday, I was quick to suggest cycling and that’s how our adventure began.

My cycling research pointed me towards the Danube path, one of Europe’s most travelled cycling routes and highly recommended for beginners experimenting with long-distance rides. The full route runs from the source in Western Germany to the coast of Ukraine’s Black Sea, crossing 10 different countries in the interim. We chose the most popular segment from Passau on Germany’s eastern border to Vienna, some 300km away as it didn’t call for map reading, complex equipment or strong quads (the route is almost entirely flat).

Planning was surprisingly easy; we decided on a week-long route through Passau, Schlonengen, Linz, Grein, Melk and Krems, with the final stretch finishing in Vienna. We reserved rooms, booked flights and hired bikes. A few short weeks later we were on our way to Munich.

“Stepping out onto the busy balcony, silence fell on the diners as they paused mid-sentence to stare at us”

Our starting point, Passau, a German city on the Austrian border, was a beautiful, sitting on the confluence of three rivers. We picked a hotel overlooking the water to enjoy the sunset. Stepping out onto the busy balcony, silence fell on the diners as they paused mid-sentence to stare at us. I considered Germany to be diverse and tolerant and so I was surprised by these reactions, but we laughed it off and made our way to bed, excited to start our journey in the morning.

We woke early to pick up our bicycles and began! Contrary to the forecast, the weather was perfect and surprisingly, the path was empty of other cyclists. We started towards the Schloengen loop, a common stop on the route where the river curves backwards on itself to form some beautiful scenery.

We were hungry after our first long day of cycling and hiking, so when we arrived at Idylle am Donauufer, I immediately noticed the menus looked promisingly thick. As Muslims, we only eat halal meat, so we’re usually resigned to a pescetarian diet anywhere remotely rural. This normally isn’t a problem, but as we flicked through the menu, we quickly realised that not a single thing was vegetarian. Our choices included cycling two hours back to the last town or sustaining ourselves on sweets and nuts. But after speaking to the lovely waitress she arranged for the chef to prepare lentil dumplings – not delicious but by far the best option.

Challenge number two came when we tried to pay for our bill. We had confused who would carry the cash and subsequently realised we needed an ATM. When we asked for the nearest one the waitress said it was 10 minutes by car but an hour with the bike up a hill. We glanced at each other, fully aware neither of us were fit enough to do the ascent in under an hour. Thankfully, she noticed our discomfort and after some pleading and negotiating agreed to drive us to the bank. The drive itself was incredible, not only for it’s effortlessness but because the golden sunset covered the river and mountains with beautiful light giving us stupendous views over the surrounding area.

We woke the next day to a beautiful mist which covered the path. The journey was much shorter and we reached Linz in a mere three hours. I was surprised to hear Arabic being spoken and there were so many women in hijab that we decided to play “I see a Muslim”, our twist on the yellow car game. Suffice to say, my arm hurt a lot by the end of the day but I liked being reminded that diverse, integrated Muslim communties exist in Europe – a thought I often forget in today’s political climate.

After our culinary fiasco the night before, we were excited to eat something delicious. Burgerista was highly recommended but we dismissed it, thinking it wouldn’t be halal. But as we walked past we spotted two women in hijab inside enjoying meaty looking burgers. We hurried in and began talking excitedly to the women who were bewildered by our presence. With lots of gesturing and google translate we were reassured enough to order two delicious halal hamburgers.

We went to bed early to prepare for day three. It was going to be a long cycle to Kollmitzberg, a small town just outside Grein, which involved two dreaded hill climbs. The following day, we arrived at our hotel, just as thunder and lightning started to break. We hurried inside, covered in sweat and dirt straight into a room of wedding guests. Once again we were met with stares and silence as guests puzzled over our choice of vehicle and wedding attire. They chatted between themselves as we locked up our bikes, I understood enough German to know they were debating where we were from and how we ended up in Austrian farm country. The manager came over to welcome us and asked if we were trying to cycle the Danube river path. His tone indicated that he was somewhat doubtful we would make it. But noticing our weariness he offered us some beer, which we politely declined, and headed up to our room.

The following morning as we ate our breakfast, other guests smiled encouragingly. It seemed everyone at the hotel now knew what we were up to and were eager to cheer us on. I appreciated their encouragement. And now, we could appreciate the views we had missed on the way up. There were rolling hills and fruit trees in all directions, indicating our entrance to the Wachau wine region in the east.

“As we neared Vienna we started saying our farewells to the river. For the last six days it had travelled with us”

The first 30 minutes of our cycle were plain sailing as we rolled downhill towards Melk, a small town known for its Abbey. The rest of the route was thankfully quite flat and we reached our destination in just three hours. We checked into a small hotel run by two lovely women. One of them was visibly Muslim and I greeted her with “As-salaam wu’Alaykum”. She seemed confused but smiled back. I persevered, eager to make a new friend.

“Are there many Muslims in Melk?”, I asked.

“Well, we are Muslims and there are one or two other families,” she said.

I beamed back at her, “we’re Muslims too!”

“You!? You’re a Muslim?” I laughed at her reaction, surprised that she hadn’t reached this conclusion herself from my name or headscarf.

Our final stretch was the longest so we set off nice and early. The road was busy with cyclists finishing off their journey – we waved at those we had met along our way, sharing in their satisfaction. As we neared Vienna we started saying our farewells to the river. For the last six days it had travelled with us, becoming the third companion on our adventure.

• A number of bike operators, including eurobike and Macs Adventure run tours lasting three to eight days. Most include luggage transport and bike hire. Self-organising is cheaper and offers more flexibility, and very manageable, even for new cyclists.

• Most airlines will let you transport bikes as long as you have the correct equipment! We chose the cheaper, hassle free option of renting bikes which we picked up in Vienna.

• Some sites on the path won’t have much variety for vegetarians, especially in smaller towns those with dietary requirements please come prepared. Cities have ample options and will satisfy those with a range of tastes.

•The Mauthausen Memorial was an excellent side trip. it’s free entry with a downloadable audio-guide. It’s a short 30 minute detour from the path.

•Visit Dürnstein, a small hillside village just outside of Krems. Richard the Lionheart was imprisoned there in the 10th century and you can climb up the mountain to see the castle.

• Just outside Passau, three rivers merge but the waters don’t mix, the result is two rivers flowing alongside each other simultaneously which are visibly different colours! At Schlogener the river does a 180 degree turn on itself creating a doughnut loop which is definitely worth seeing!